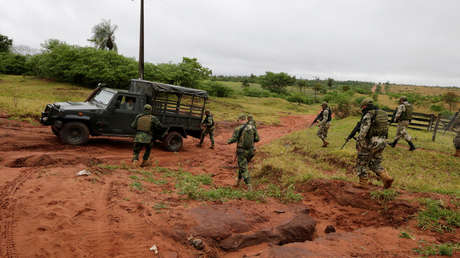 The Government of Alberto Fernández indicated that the victims were Argentinians, and asked Paraguay to clarify the facts, meanwhile, Asunción maintains that the youths were of Paraguayan nationality.

International controversy increases over the operation of the Paraguayan Armed Forces against the guerrilla movement Paraguayan People’s Army (EPP), which ended with a death toll of minors on Wednesday, September 2. According to local authorities themselves, the girls were killed.

A command from the Joint Task Force (JTF) broke into an EPP base, located in the department of Concepción, in the middle of a 4,500-hectare jungle: “I believe that historically this is the most important camp that we have accessed,” described the general of the FTC, Héctor Grau, in public statements.

As a result of this large military deployment, the deaths of the two minors took place, in events that have yet to be investigated. When the news was released, the Prosecutor’s Office and the Paraguayan Army maintained that there was a “confrontation.”

The army also affirmed that alleged combatants from the rebel group managed to escape and that some were injured.

In addition, state forces would have managed to seize  weapons, ammunition, explosives, around $ 16,000 and 3 million guaranies [$ 430], which “will be analyzed to determine if they were the product of any kidnapping or extortion,” said prosecutor Federico Delfino.

In fact, the Public Ministry itself released images of the discovery, where you can also see books – such as ‘El Capital’, by Karl Marx – and documents linked to the ideology of the insurgent group . In one of them you can see the face of Ernesto ‘Che’ Guevara, the Argentine icon of the Latin American left, presented as if having books or having a political ideology is evidence of a crime.

On the same day that the minors were killed, right wing Paraguayan president, Mario Abdo Benítez, went to the scene to congratulate the FTC squad. He also published a photo on social networks, where he was shown with the uniformed men and even carried a weapon at his waist. “We have had a successful operation against the EPP,” concluded the head of state. He even communicated on the official account: “After a confrontation, two members of this armed group have been killed.”

Meanwhile, the security forces indicated that the victims were minors, but their ages and their respective identities were not clarified. The Anti-kidnapping Prosecutor even said that they were teenagers . It was also reported that they entered the country in November from Argentina.

Carmen Villalba, a detained EPP leader and a direct relative of the deceased, sent an audio to the Argentine Lawyers Association, denying the official account. She revealed that the dead were not combatants, but that they were 11-year-old girls, who were visiting relatives of the group. Her message quickly went viral.

In turn, the lawyer representing the parents in Paraguay, Daisy Irala Toledo, released the alleged names of the girls:  Lilian Mariana Villalba and María Carmen Villalba . In fact, she shared documents possibly theirs, and also claimed that they were 11 years old.

Analysis of the bodies amid suspicions

Once the “confrontation” ended, the authorities quickly buried the bodies, supposedly under the protocol of the pandemic. For Irala Toledo, it was an attempt to hide the number of bullets that the girls would have received “to their backs”.

In the midst of the general commotion, the Justice ordered the exhumation of the bodies to carry out autopsies, but on Friday the lawyer publicly announced that they did not allow her to enter the morgue: “We do not expect anything good from the ‘Justice’ of the unjust,” she posted on Facebook.

For his part, the forensic doctor Pablo Lemir reported that the bodies have bullet holes “from the back to the front”, but also “from the front to the back . ” In addition, he misrepresented the previous forensic information, assuming they are 11 years old. However, an important piece of evidence was burned by the uniformed men: the clothes of the little girls, which could serve to define the distance of the shots.

Meanwhile, more documents were released proving that the girls were Argentine. On September 4, Ultima Hora showed the girls‘ apparent birth certificates: if correct, they were born in the town of Clorinda, Misiones province (Argentina). This is important because, in that case, the neighboring country should be involved in the situation that resembles Colombian common false positive cases.

Finally, Paraguay had to ask Argentina for help to identify the victims, and last Friday the Argentinian Foreign Ministry answered in a forceful way: “When the National Registry of Persons (RENAPER) was consulted, it was possible to determine that the deceased are two minors, of Argentine nationality.” They also confirmed that they were 11 years old, as claimed by relatives. However, in a possible attempt to remove Buenos Aires from the case, Abdo’s Ministry of Foreign Relations responded that “there is evidence that they were born in Paraguayan territory,” although what those tests are was not clarified.

Outside of the diplomatic statements, Argentine voices from Foreign Relations tell RT that “everything that the Paraguayan military said has been proven false.”

The Government of Alberto Fernández requested “to count on the collaboration of the Paraguayan Government to clarify the facts and identify responsibilities.” He also rejected the accusations of Héctor Grau, Paraguayan general of the TFC, who affirmed that Argentina became a “nursery for soldiers of the Paraguayan People’s Army.”

In turn, the Inter-American Commission on Human Rights (IACHR) repudiated everything that happened. The agency attached to the discredited OAS, urged Paraguay to investigate the circumstances of the deaths and “to redouble efforts in the adoption of preventive measures for the forced recruitment of children and adolescents by armed groups in the country.”

The UN statement was more blunt. Jan Jarab, head of the Human Rights office for South America, asked to clarify this “extremely serious event that ended the lives of two girls, whom the State had to protect.”

In response, the Paraguayan Foreign Ministry called Representative Jan Jarab’s expressions “irresponsible.” And he added: “The so-called Paraguayan People’s Army (EPP) is not a non-state armed group, as said office [the UN] erroneously affirms, but a criminal organization with terrorist objectives and actions.”

With this general framework, it is necessary for the Paraguayan Prosecutor’s Office to reliably report the nationality of the children and, also, for the local Justice to initiate a serious investigation of the facts. Otherwise, one could go to the Inter-American Court of Human Rights (IACHR) and file a lawsuit against the Paraguayan State, for not guaranteeing the rights of the child and, much less, their life. But, in addition to the government’s, analysis of the responsibility of the legal guardians of these minors, and how they got to the place where the events occurred, remains to be seen.