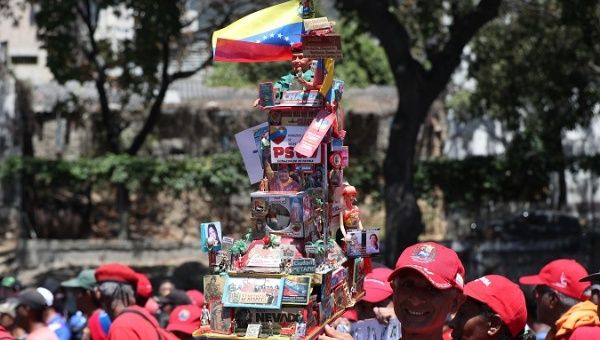 More than 400 members of different political and social organizations are in Caracas, Venezuela to gather for the International Peoples’ Assembly.

The event will take place in the Venezuelan capital on Sunday, Feb. 24, in order to debate, articulate and deepen international solidarity and the fight against U.S. interference in Venezuela.

Committees from more than 80 countries will attend, denouncing the military intervention by the United States and its allies in South America, to overthrow the constitutional government of President Nicolás Maduro.

The meeting will take place from February 24 to 27.

João Pedro Stedile, member of the National Board of the Landless Rural Workers’ Movement (MST), and coordinator of the Vía Campesina International, said that the date chosen for the event symbolizes solidarity with Venezuela, which is a target of attacks from neighboring governments and the United States, reported Peoples Dispatch.

“We are here, the coordinating commission of the International Peoples’ Assembly. For the last two years we have been preparing for the Assembly and we decided that it will be held here in Caracas, on this date, as a form of solidarity from all of the organizations in the world with the government of Nicolás Maduro and with the Venezuelan people,” noted Stedile.

The spokesman of the popular organizations of Zambia, representing the peoples of Africa, addressed a speech to the Venezuelans and said: “Your struggle is our struggle. For 500 years the African people have suffered from colonialism and imperialism and we know what you are suffering now. It is unacceptable that foreign authorities think that the sovereignty of the country does not belong to the people of this country.”

For her part, U.S. spokesperson Claudia Cruz, expressed her support for the Bolivarian Revolution and its leader, Nicolás Maduro. In addition, she described the immoral speech of the U.S. Governments’ accusations of Venezuela having a humanitarian crisis, as “shameful.”

“Venezuela does not have a humanitarian crisis; Venezuela has a fight in defense of life.The United States can not say that. Venezuela is an example of the struggle for the dignity of all the peoples of the world and that is why we are here,” she said.

She continued, “It is embarrassing, it is criminal and immoral that the United States – a country where 140 million poor people live, where 6 million live with hunger daily – comes and tells Venezuela that there is a humanitarian crisis. Venezuela has the resistance and the defense of the revolution that permits the redistribution of riches to the most poor, the most dispossessed.”

The coordinator of the Pan-Africanism Federal Movement, Mamadu Djabi Djalo, said: “We will win this fight and we will do this together, we stand in solidarity with the people of Venezuela in the face of the United States’ pretensions.”

As part of the opening ceremony of the Assembly, a “Concert for Peace” will be held in Caracas.