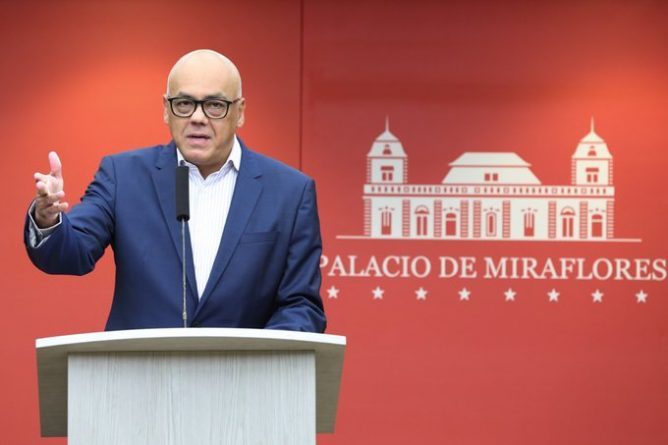 “The Bolivarian government defended the right to peace of all the Venezuelan people,” the vice president of Communication, Tourism and Culture, Jorge Rodríguez, affirmed Sunday in statements offered from the Miraflores Palace in Caracas.

In his words before national and international media, Rodríguez said that “it was achieved with tenacity and firmness, with a cool head and nerves of steel, to dismantle the operations of false positives “.

“The people, the Bolivarian National Police, the Bolivarian National Guard defended the right to peace,” said Rodriguez, and the dismantling of false positives operations at the Simón Bolívar International Bridge was achieved, which aimed to undermine citizen tranquility as part of the of the plans  under the United States Government (USA) supervision against Venezuela.

“If the plans of Juan Guaidó, of the Colombian president, Iván Duque, of the Secretary General of the OAS, Luis Almagro, and of the Chilean president, Sebastián Piñera, had been successful, who knows what scenario of violent confrontation we would be facing today,” he added.

He declared that the burning of two trucks on the Colombian-Venezuelan border, which they tried to attribute to the Venezuelan security forces, constitutes fake news. “There was no intention of bringing humanitarian aid, what they were trying to do was an aggression against a country that defends its sovereignty and democracy,” he said.

The Minister of Communication and Information also presented videos that demonstrate the link between the Neo-Granadian leader and Venezuelan deputies with the burning of that cargo.

“All this happened on the Colombian side, with the complicity of President Iván Duque. It was made by the same criminals who were on the truck, who got off and emptied the gasoline containers. In addition, you can clearly see the Molotov cocktails thrown to set the truck on fire. In those trucks there was nothing, they were predestined to be burned, “he explained.

He asserted that these actions were planned on Colombian soil with the intention of invading Venezuelan territory, because at no time was the idea to enter food or medicine. “Colombia is a country that is expert in false positives. There was no intention of bringing humanitarian aid, “he said.

During his statement, he showed evidence of the use of these tanks of the Bolivarian National Guard (GNB) by two infiltrators, who smashed them against the barriers located on the Simón Bolívar International Bridge and injured a police official and a Chilean journalist. “If it was true that they wanted to enter humanitarian aid, why was the first thing to run over people with the tanks?” Rodriguez asked, and said that the goal was to create a false positive to hold Venezuelan troops responsible for the violence.

“Do not lie anymore! Yesterday’s operation was running over people with armored tanks. What human being has the self-confidence to see the death of people as an investment? (referring to comments made by Guaido the previous day). That’s what happened yesterday.  The hoax of ‘humanitarian aid’ is a l ready clear: it was only an aggression against Venezuela, “he said.

Rodriguez said that this action demonstrates the true intentions of Guaidó, who recently told the media that the transition would take place at any price, because  “deaths are not costs but an investment in the future.”

Government of Guaidó is in itself a fallacy
Rodríguez , reaffirmed the illegitimacy of the supposed government of the deputy of the National Assembly (AN) in contempt and legal nullity Juan Guaidó , self-proclaimed “president in charge”.

“The supposed government of Guaidó is in itself a fallacy.” The intention of the opposition this Saturday was to assassinate people who daily travel between the border of Venezuela and Colombia and this was evidenced by the use of tanks of the Bolivarian National Guard (GNB) by two infiltrators who smashed them against the barriers located in the Simón Bolívar International Bridge and injured a police officer and a Chilean journalist.

In this regard, he showed videos that collect images of the destabilizing actions promoted by the extreme right on the border, in the failed attempt to enter the country with supposed “humanitarian aid” to justify a US military intervention.

Violent opponents attacked Olivares on the Colombian border for not paying them
Rodriguez also revealed that the deputy of the National Assembly José Manuel Olivares was beaten by young paramilitary or “guarimberos” for payment issues, in the border area in the Táchira state, this Saturday. “It is perfectly clear in the videos how the drug addicted drug lords burn the truck – with the alleged humanitarian aid – and then there is the punch they give to their boss (Olivares) for not paying them,” Rodríguez said.

Rodriguez made his statement in response to the publication made by Olivares is his Twitter account , which said he had been attacked by two “infiltrated groups” within the ranks of volunteers at the time the extreme right tried to forcefully enter the alleged “humanitarian aid” to Venezuela under the orders of the United States Government.

The vice president noted that the version of Olivares is implausible, while the deputy pretended to believe that followers of President Nicolás Maduro entered Cúcuta even with the border closed and although the guarimberos, supported by the Colombian National Police, managed to access, hit Olivares and then they would bring him to Venezuela without any resistance from the violent ones who were under the effects of  drugs.

Given this, the vice president recalled the events of 2017, when the deputy of the AN Miguel Pizarro and Henrique Capriles Radonski were beaten by the same “guarimberos” who are now in Cúcuta, because they had not been paid.

Case of Freddy Superlano
In his statements he also referred to the deputy to the AN in contempt Freddy Superlano Salinas and his assistant and cousin, Carlos Salinas, who were intoxicated by two prostitutes in a motel in Cúcuta, Colombia , in a deed in which the latter died and with which the right created another false positive.

The newspaper La Opinión from Cúcuta reviews the facts :

“The Salinas cousins enjoyed Friday night in the company of two women, after picking them up at the Bolivar Shopping Center, but at about 6:00 a.m. on Saturday morning they decided to go to the motel to continue the rumba in the middle of drinks. Apparently, once they entered the room, the companions drugged or bewildered Superlano and his cousin, who lost consciousness.

As it was known, the two women stole the rings, the cell phones and the cash they carried and fled the place. However, the authorities are conducting investigations and supporting the identification of the suspects through the videos of the establishment’s security cameras, which are monitored by the Police. “

Rodriguez said there are records of the four people taking a room, and cameras also recorded the moment when the two women left the motel. “Around 6:00 in the morning of Saturday, while they were sending people to invade Venezuela, while they were running over the Chilean journalist and the National Bolivarian Police (PNB), while they had planned the frightful operation of false positive to run over hundreds of people crossing the Simón Bolívar bridge, Superlano was with a prostitute in a hotel. ”

He also noted: “Marco Rubio (Senator from the State of Florida, United States) mentioned a personal event that we did not want to mention. We do this because we have to show the world the immense and powerful false positive operation to attack Venezuela, “he said.

He stressed that, thanks to the failure of those destabilizing plans that the extreme right tried to perpetrate in the border area of ​​Venezuela, today the country is at peace.