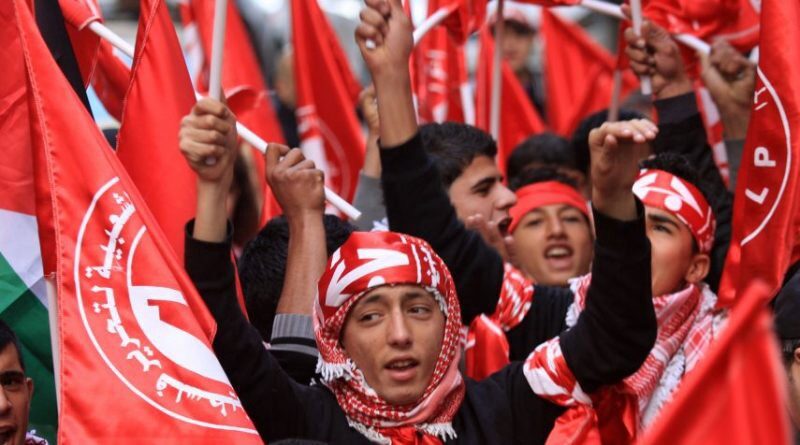 The following is an interview that I conducted with a representative of the Popular Front for the Liberation of Palestine (PFLP), Comrade Guevara Hadad.

Q: Of course we are aware that your movement rejects the so-called “two-state solution” in Palestine. What kind of Palestine is your organisation fighting for? Many prominent anti-Zionist activists advocate for what is known as a “one-state solution”, or a “bi-national state”, that is, one, secular, democratic state with fully equal rights for all, irrespective of race or faith, and with the right of return for Palestinian refugees, what is the PFLP’s view on such a proposal?

A: The Popular Front for the Liberation of Palestine is a militant political party that fights and works to educate, organize and lead the Palestinian masses in order to restore Palestinian national rights, foremost of which is the right of return, self-determination, and the establishment of an independent state with Jerusalem as its capital as a transitional goal on the path to liberating the entire Palestinian national territory, and establishing a democratic state of Palestine in which all its citizens live. Full equality without discrimination in rights and duties, regardless of colour, race, gender or belief. It struggles for the establishment of a socialist society free of exploitation, based on democratic and humane principles, on the way to achieving a unified Arab socialist society.

Unfortunately, there are some currents that try to equate the victim and the executioner, especially those that propose a two-state solution as if the conflict is between two states and not between an occupation and a people suffering under occupation.

Our vision and strategy is clear, which is to defeat the occupation from all of our Palestinian national territory by all means, foremost of which is armed struggle, the return of all refugees and the elimination of the occupation in the form of settlement and military. Socialist democracy, as we are hostile to Zionism as a colonial-military occupation force. Our struggle is an existential struggle, not a religious conflict, as some are trying to transform it.

Proceeding from its commitment to the interests of the toiling people and its quest to achieve the goals of the Palestinian people, the Front seeks to include in its ranks the militant and democratic elements of all classes and social groups that work and struggle for national independence and social progress.

Q: Once Palestine is free, what kind of policies would your organisation want to see implemented? Of course the PFLP follows a socialist and Marxist-Leninist program, but I’m sure we would all love to know what specific policies the PFLP would support in a free, socialist Palestine.

A: In understanding, analyzing and changing reality and reading its various phenomena, the Front is guided by Marxist thought, with its essence the historical dialectical materialist approach and all that is progressive, democratic and humane in the intellectual and cultural heritage of our Palestinian people, the Arab nation and all of humanity.

The Popular Front, through its local, national and international alliances, struggles to establish a system of social justice and freedom of peace, and believes that working to create a free and just world is necessary not only to defeat Zionism, but also to all imperialist policies. It should be noted that part of the vision of the Popular Front in the post-liberation stage is to support the international liberation movements, not only with a position, but a tendency to fight with them against global imperialism, injustice and oppression.

As for the front’s position on the late national president Gamal Abdel Nasser, it is a well-known and clear position, as this person represented a glimmer of hope for the unity of the Arab nation and a glimmer of hope for forming a united front against global imperialism and Zionism, which is an integral part of it. With the late president, even if it was marred by some filtering at one time, the Popular Front’s view of the late president is similar to its view of revolutionary leaders such as Che Guevara, Fidel Castro, Hugo Chavez … etc

Q: Of course there are many factions of the Palestinian resistance, ranging from revolutionary socialist and communist resistance movements, to non-socialist resistance movements, such as Hamas for instance. Would the PFLP advocate working with groups like Hamas as part of a broad front against Zionism, colonialism and imperialism? Similarly there are many, many different national liberation and revolutionary struggles all around the world, including the Irish and Kurdish struggles for instance. Which national liberation struggles does the PFLP in particular lend its support and solidarity to?

A: The Popular Front believes in the principle of international solidarity and seeks to ally itself with the forces of justice, freedom and peace in support of the cause of our people towards a world free from all forms of exploitation, injustice and aggression.

RELATED CONTENT: On the Ethics of Non-Palestinians Promoting Nonviolence

The front has strong relations with many international liberation movements, and in the past it had contributed to supporting many of them, whether with training, armament, or financial support, in addition to the firm positions in support of them, including the Irish Republican Army, the Kurdistan Workers’ Party, the FARC, the Japanese Red Army and Bader-Meinhof “The German Red Army” Etc… This is historically the front’s relationship with many international liberation movements, but at the present time it is not possible to talk about the form of relations with the rest of these parties for security reasons.

Q: How do you think revolutionary socialists, communists and anti-imperialists worldwide can learn from the PFLP and the Palestinian resistance?

A: The Popular Front for the Liberation of Palestine exercises all forms of political, ideological, economic, peaceful and violent struggle, including armed struggle, on the grounds of interdependence of forms, methods and means of struggle and the necessity of mastering their use and reconciling them and devising and disseminating appropriate forms according to the concrete circumstances at each stage.
This is what we can say in these circumstances.

Unfortunately, there are many socialist and communist movements and parties that have deviated from the essence of their thought and ideology and have been affected by revisionist currents. But if we want to express what communist movements and parties in the world can benefit from, even those that have deviated from them, we can summarize them as follows:
Taking sides with the oppressed wherever they are, and that the struggle may last for a hundred years, and the short-hearted must step aside.

This is based on our absolute belief in the inevitability of liberation and self-determination, not only for the Palestinians, but for all the oppressed peoples in the world.

Featured image: Resistance is not terrorism.