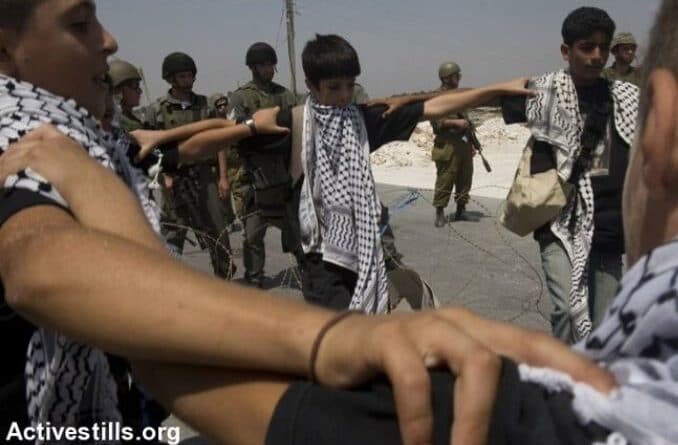 In “The Violence Debate: Teaching the Oppressed how to Fight Oppression” (2010), Ramzy Baroud explains that for “progressive and Leftist media and audiences, stories praising non-violence” are preferred, for they invoke a strategy acceptable to liberals in the West. At no other time, perhaps, than the present has there been so much condemnation of the victims for their resistance.

“Whether in subtle or overt ways,” Baroud continues, “armed resistance in Palestine is always condemned.” It is analogous to informing Africans (Blacks) that if they would just do what the police are asking in a polite manner, then they won’t get shot.

“The problem with the non-violence bandwagon,” Baroud concludes, “is that it is grossly misrepresentative of the reality on the ground.” As he points out, Palestinians have employed non-violence for decades going back to the prolonged strike of 1936.

More recently, Gazans participated in the Great March of Return, weekly events that would span a good two years. In return for the nonviolent protests, the United Nations documented that Israeli soldiers murdered 214 Palestinians, including 46 children and injured 36,100 more, including 8,800 children. One in five of those injured were by live bullets. Among Israelis, one soldier was killed while 7 more were injured.

More recently, Palestinians staged a General Strike on May 18, 2021, to protest Israel’s attack on the Gaza Strip. For the first time in over 20 years, Palestinians united to close all economic, commercial and educational establishments in the occupied West Bank, including East Jerusalem, Gaza and the Palestinian villages and towns in Israel. The strike also called attention to settler mob violence, forcible evictions of Palestinians from the Sheikh Jarrah neighborhood, and several days of attacks against the Al-Aqsa Mosque compound.

Not only is this strategy considered a nonviolent means of protest, but in this instance, it was unified, supported by the several Palestinian political parties, unions, syndicates, and popular movements, all of which published supportive statements and encouraged the various factions to take part.

In return, the Israelis have murdered approximately 29 Palestinians on the West Bank, including Islam Burnat, 16 years old, who was taking part in the village of Bil’in, a long-time site of weekly protests organized by his uncle Iyad Burnat.

Islam’s paternal grandmother, Intisar Burnat, told Middle East News that the family has long participated in nonviolent protests against Israeli settlement building and land confiscation in their village. His uncle, Iyad Burnat, is the subject of 5 Broken Cameras, a documentary shot by his brother Emad during the course of the protests.

The lesson is that no matter what Palestinians do they are murdered, sometimes incrementally, sometimes spectacularly, but, in fact, it’s been 73 years of genocide starting back way before Hamas. Significantly, as Ramzy Baroud contends, the privileging of nonviolence takes the focus away from the violence imparted by the Israeli occupation on all kinds of protest in the West Bank and Gaza—”and places it solely on the shoulders of Palestinians.”

In “The Hamas are Coming: A View of the Violence from Inside Israel,” Israeli activist Miko Peled contends that,

“there are never Palestinians, never people, only ‘The Hamas’—and ‘The Hamas’ is, by the way, male and singular (in Hebrew). ‘The Hamas thinks;’ ‘The Hamas believes;’ ‘The Hamas should know;’ ‘When the Hamas understands, he will stop;’ and finally, ‘When The Hamas is hit hard he will never dare to attack Israel again.’”

“Violence, racism, neo-fascist attitudes, and a toxic mix of religion and nationality,” Peled concludes, “make Zionism very dangerous,” but it is an element that does not stand out when only Palestinians are blamed for the violence inflicted on them. In addition, as activist Na’eem Jeenah explains, “the armed resistance in Gaza is not just Hamas. It includes the PFLP, PIJ as well as elements of Fatah.”

Moreover, it’s misleading to reduce the resistance to “The Hamas.” Instead, explains Baroud, “it is a Palestinian uprising, an Intifada unprecedented in the history of the Palestinian struggle, both in its nature and outreach.” For the first time in many years, he continues, Palestinians are “challenging factionalism, along with any attempt at making Israeli occupation and apartheid normal.”

Led by Palestinian youth, who Baroud describes as constantly marginalized and oppressed by their own leadership and by the relentless Israeli military occupation, this new movement “eclipses Fatah and Hamas and all the rest, because without a united people there can be no meaningful resistance, no vision for liberation, no struggle for justice to be won.”

On the 96th anniversary of the birthday of Malcolm X, May 19, 2021, its fitting to remember his words. Spoken at the second Organization of Afro-American Unity (OAAU) rally on July 5, 1954, he remarked the following:

His remarks are still relevant today as Palestinians, among others, reflect on what they need. Accordingly, activist Na’eem Jeenah suggests that “perhaps we should ask Palestinians what they think, before we tell them what they should do.” Echoing the words of theorist Frantz Fanon, he warns against “prescribing and pontificating to oppressed people about how they should respond to that oppression.”

“Winning and losing wars cannot be measured by gruesome comparisons between the number of dead on both sides,” Baroud concludes, “but only through the examination of the objectives.

The Palestinian people’s objective is to rise in unity, resist and inspire global solidarity around their cause; they have done so with flying colors.” Looking to the future, Micha K. Ben-David, co-founder at Grassroots Al-Quds and former Public relations at Breaking the Silence, warns that “focusing on either prejudice, racism, hatred… or just ending this particular wave of violence- is simply distracting from the political and economic realities of settler colonialism that have created and perpetuate the hatred and the violence.” Instead, he asks that his fellow Jewish community—and all those concerned with global struggles—look beyond returning to the status quo in a country, that he claims, is “neither a Jewish nor a democratic state.”

In the words, again, of Ramzy Baroud,

“we said it a million times before, and now, we say it again but with greater confidence than ever before, only steadfastness, only sumud, only muqawama, only RESISTANCE will deliver justice and freedom in Palestine. Nothing else matters. Nothing else counts.”

Now is the time for the international community to rally in support of this resistance.