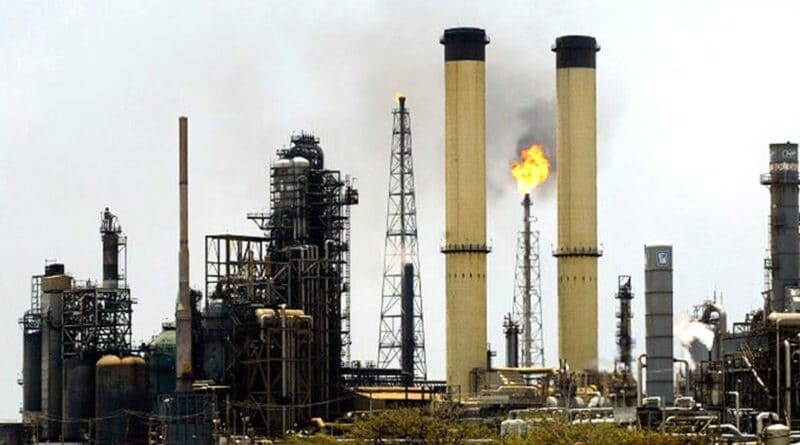 Caracas is looking to reactivate the largest refinery in the country.

A series of airlifts will deliver catalysts and other materials to the Paraguana Refining Complex (CRP) in Falcon State, western Venezuela.

According to flight tracking data, a Venezuelan state airline Airbus took off from Tehran and landed in Paraguana on February 11, with industry sources stating that a dozen more are to be expected in the coming weeks.

The South American country has suffered severe fuel shortages as its oil industry flounders under the weight of US sanctions. The US Treasury Department warned companies against selling gasoline to Caracas, clamped down on swap deals and went as far as seizing a Venezuela-bound fuel shipment.

Washington’s unilateral measures, as well as mismanagement, a lack of maintenance and electricity issues, ground the country’s refining industry to a halt in 2019.

Tehran had previously set up an air corridor in the first half of 2020 to ship materials and technicians to restart the 310,000 barrel per day (bpd) Cardonrefinery. The new shipments are meant to help state oil company PDVSA bring the catalytic cracker at the 645,000 bpd Amuay refinery back online. Amuay and Cardon, both in the Paraguana Complex, are two of the largest refineries in the hemisphere.

Sources told Reuters that the Cardon refinery is currently producing 60,000 bpd of gasoline, using naphtha supplied by the nearby Amuay units. Both facilities were recently reactivated after PDVSA completed underwater repairs to leaking pipelines.

However, Venezuela’s refining capacity is far from meeting current demand even with reduced economic activity under the Covid-19 quarantine.

According to Argus Media, domestic gasoline demand stands at 110,000 bpd, and diesel at 100,000 bpd. While Cardon is the only facility producing gasoline, diesel is produced both at the CRP and the Puerto La Cruz refinery, with current combined output levels at 38,000 bpd.

Iran has additionally stepped up with fuel shipments to help the Venezuelan government address gasoline and diesel shortages in the short run.

The Iran-flagged Faxon and Fortune tankers docked in eastern Venezuela terminals in the last week of January to deliver 400,000 barrels of gasoline. Tehran sent two large scale fuel shipments to the Latin American nation over 2020 in spite of threats from the Trump administration.

US unilateral measures have come under increased scrutiny in recent weeks, with calls for sanctions relief coming from a United Nations human rights expert as well as a group of US representatives.

Oil corporations have likewise lobbied the Biden administration to revert some of its predecessor’s measures, including the ban on swap agreements.

Featured image: The Paraguana Refining Complex is the largest in the hemisphere. (Archive)