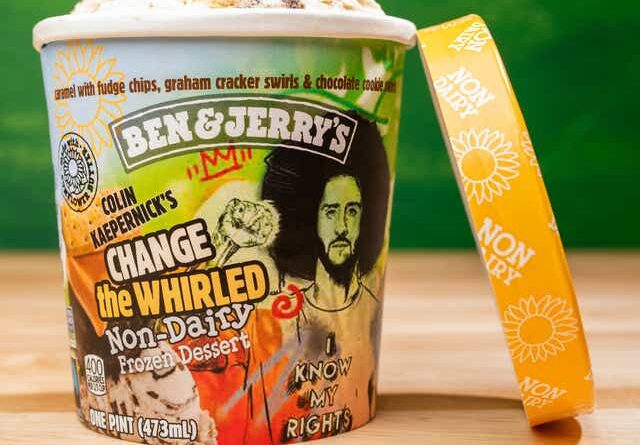 The Electronic Intifada’s Ali Abunimah spoke to TRT World’s Money Talks program about the decision by Ben & Jerry’s to stop selling its ice cream in Israeli settlements in the occupied West Bank.

Israel is enraged and threatening to punish the frozen treats maker—a reaction he told TRT World is totally unhinged.

Here is the video:

Palestine’s BDS—boycott, divestment and sanctions—movement celebrated a win that came after years of grassroots campaigning.

“We warmly welcome their decision but call on Ben & Jerry’s to end all operations in apartheid Israel,” the BDS National Committee added.

Following years of #BDS campaigns @benandjerrys has announced it will end sales of its ice cream in Israel's illegal settlements on stolen Palestinian land.

We warmly welcome their decision but call on Ben & Jerry's to end all operations in apartheid Israel.#BDSsuccess pic.twitter.com/0n1AjnPFaA

Israeli foreign minister Yair Lapid denounced Ben & Jerry’s move as “a disgraceful capitulation to anti-Semitism, to BDS and to all that is evil in the anti-Israel and anti-Jewish discourse.”

Israel has no good arguments to defend its illegal colonization of occupied Palestinian land. So it lazily smears virtually anyone who criticizes or takes action to document or counter its crimes and abuses them as anti-Jewish bigots.

Lapid also vowed to press more than two dozen US states that have passed legislation targeting the BDS movement “to enforce these laws against Ben & Jerry’s.”

“They will not treat the State of Israel like this without a response,” Lapid added.

Over 30 states in the United States have passed anti-BDS legislation in recent years. I plan on asking each of them to enforce these laws against Ben & Jerry's. They will not treat the State of Israel like this without a response.

“There are many ice cream brands, but only one Jewish state,” Bennett added.

“Ben & Jerry’s has decided to brand itself as the anti-Israel ice cream.”

Prime Minister Bennett spoke with Alan Jope, CEO of Unilever which owns Ben & Jerry's and made it clear that he views with utmost gravity the decision by Ben & Jerry's to boycott Israel and added that this is a subsidiary of Unilever, which has taken a clearly anti-Israel step.

On Tuesday, Gilad Erdan, Israel’s ambassador to the US, published a letter he sent to the governors of 35 US states denouncing Ben & Jerry’s “anti-Semitic” action.

Erdan urged the officials to “consider speaking out” and take punitive measures “including in relation to your state laws and the commercial dealings between Ben & Jerry’s and your state.”

In coordination w/ @yairlapid, I sent a letter to 35 Governors of US states that have legislation against the Boycott, Divestment, and Sanctions movement targeting Israel. 1/2 pic.twitter.com/tGW720oRZL

Anti-BDS laws are widely viewed as unconstitutional attempts to force pro-Israel political opinions on US citizens and entities.

Israel has previously taken credit for helping get many of these unconstitutional laws passed in the first place.

Ben & Jerry’s previously angered Israel and its lobby in the late 1990s, when under pressure from campaigners it ended use of spring water pillaged from the Israeli-occupied Golan Heights, part of Syria.

Scorched earth
Some pro-Israel activists are also calling on Jewish religious bodies around the world to withdraw kosher certification from Ben & Jerry’s products.

One rabbinical organization in Australia has reportedly already done so.

Similar to halal certification for Muslims, a kosher certification given by a qualified rabbinical agency attests that a food item has been made according to Jewish religious standards.

Politicizing such certifications in the service of Israel is another reprehensible attempt to conflate appropriate actions to counter Israel’s violations of international law with anti-Jewish bigotry.

Ben & Jerry's losing its kosher certification for deciding not to sell ice cream in illegal settlements strikes me as a wild conflation of religious practice with support for the occupation https://t.co/OD84nvQRfT

This scorched earth tactic by pro-Israel activists is especially reckless, given that anti-Jewish and anti-Muslim bigots in several countries already spread lies and conspiracy theories about kosher and halal certifications to advance racist, far-right agendas.

‘Deceit’
Founded at a gas station in Vermont in 1978 by Ben Cohen and Jerry Greenfield, Ben & Jerry’s has fostered a reputation as a socially conscious company.

It was fully acquired by Unilever in 2000, but retains an independent board of directors that the ice cream maker says is “empowered to protect and defend Ben & Jerry’s brand equity and integrity.”

The decision to end sales in Israeli settlements has sparked a public battle between Unilever and Ben & Jerry’s management on the one hand, and the independent board on the other.

On Monday, Ben & Jerry’s released a statement announcing that “We believe it is inconsistent with our values for Ben & Jerry’s ice cream to be sold in the occupied Palestinian territory.”

“We have a longstanding partnership with our licensee, who manufactures Ben & Jerry’s ice cream in Israel and distributes it in the region,” the company added.

“We have been working to change this, and so we have informed our licensee that we will not renew the license agreement when it expires at the end of next year.”

The statement’s final sentence asserts that although Ben & Jerry’s will no longer be sold in occupied Palestinian territories, “we will stay in Israel through a different arrangement”—details of which would be announced later.

Unilever issued a separate statement affirming, “We remain fully committed to our presence in Israel.”

With regard to its subsidiary, Unilever added that it “recognized the right of the brand and its independent board to take decisions about its social mission.”

“We also welcome the fact that Ben & Jerry’s will stay in Israel,” Unilever asserted.

The independent board is rejecting this.

The board says the statement it approved differs from the one actually issued by Ben & Jerry’s. It does not include any commitment to “stay in Israel.”

Unilever and the CEO of Ben & Jerry’s took a position and published a statement on a matter directly related to the ice cream maker’s “social mission and brand integrity” without its approval, the board said.

This put the companies “in violation of the spirit and the letter” of the agreement made when Unilever acquired Ben & Jerry’s, the board added.

Board chair Anuradha Mittal did not respond to inquiries from The Electronic Intifada, but she told NBC News, “I am saddened by the deceit of it.”

“I can’t stop thinking that this is what happens when you have a board with all women and people of color who have been pushing to do the right thing,” Mittal added.

Snowball effect
Notwithstanding these differences, Israel considers Ben & Jerry’s withdrawal even from its West Bank settlements as a major blow and a dangerous precedent.

It comes amid a widening international consensus that companies have an obligation not to profit from or otherwise be complicit in Israel’s colonization of occupied territories and other abuses of Palestinian rights.

What is most significant about Ben & Jerry’s decision to stop operating in the occupied West Bank is that sets a precedent and a high-profile one at that. The door is now open for more and more companies (and individuals) to boycott and divest from Apartheid israel all together.

Recently, one of Norway’s biggest pension funds divested from 16 Israeli and international firms that profit from the settlements.

This also comes amid growing recognition that Israel’s policies towards Palestinians, wherever they live, constitute the crime of apartheid.

Israel undoubtedly fears that the ice cream maker from Vermont has set off a snowball effect that will encourage others to freeze it out as well.

Featured image: The ice cream brand Ben and Jerry’s, which calls itself a ”socially conscious company,” has decided to stop operating in illegal Israeli settlements in Occupied Palestinian Territory. Photo from benjerry.com

(The Electronic Intifada) by Ali Abunimah