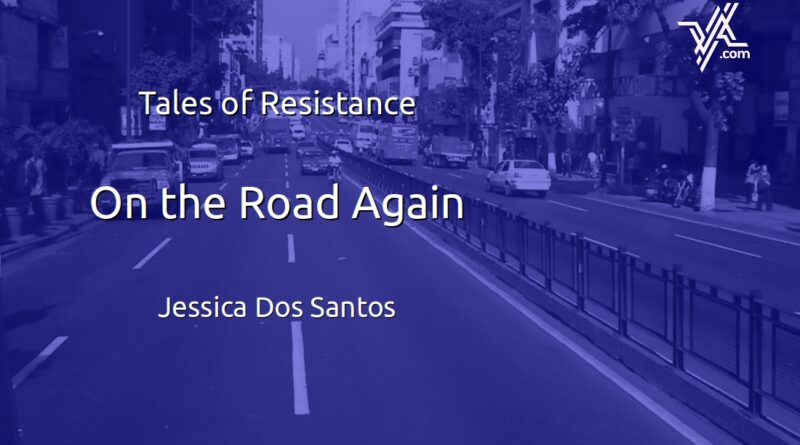 VA columnist Jessica Dos Santos Reflects on the Justice System and the Importance of Fighting to Improve it.

On May 15, in the middle of the quarantine, there was a power blackout. A few hours went by and electricity did not return, and my lunch-less stomach was starting to make its hunger felt.

Unfortunately, I only have an electric stove, and I had run out of “easy” food options (essentially bread).

Therefore I decided to walk the 11 floors down to the parking lot, grab my car with its precious few liters of gas remaining (the Iranian tankers had yet to arrive in Venezuela) and go out to get drinking water and something to eat.

After driving for a few blocks my mission was accomplished. But on the way back, on the steep climb to my final destination, a motorbiker and his passenger, driving on the wrong side, smashed against my car. Smashed is the right word, you could not claim that I had run them over.

One hurt his ankle and the other hit his knee. The front end of my car was completely shattered:

– “Shit, this is a bigger miracle than what José Gregorio Hernández [recently sanctified Venezuelan doctor] accomplished. Who the fuck has an accident in the middle of the pandemic when there are only a couple of zombies out on the street?” I thought amidst my panic.

My tyre had exploded, so there was no possibility of just fleeing the scene (though it did occur to me), which left me to negotiate. In the middle of the negotiations, the police, which was watching over a nearby gas station, approached. That’s when the real problems began.

The police officers decreed that the two men, who minutes before had sprung up to threaten me with a sharp knife, were dangerously wounded and needed to be taken to a hospital. For that, they called an ambulance, which arrived within minutes but then ran out of fuel. “You know, the fuel situation is very tough right now,” they said. As a consequence, I was supposed to conjure a new tyre out of nowhere and drive the injured to the nearest hospital, then get to the nearest police station, since both my car and myself were retained and at the disposal of the authorities.

It looked straight out of a Gabriel García Márquez tale: magical realism had taken over. Following my refusals, the “wounded,” the very ones who were about to die moments earlier, drove on their bike to the hospital. As for me, I effectively ended up in the police station, where I was subjected to an endless stream of poorly disguised extortion attempts. “If the medical report from those two finds anything serious you might find yourself in court”; “ If you can’t sort this out today, your car will end up in the police parking lot and have everything stolen from it, even though we’re under quarantine”; “Last week one poor idiot like you got himself into a similar mess and saved himself by paying 6 thousand dollars” (that’s twice as much as my car is worth). The mere suggestion made me laugh. My grandma was right after all: there is nothing worse for those who want to hurt you than to see you smile.

But the winds grew stronger and stronger. In the middle of the hurricane of threats, some more veiled than others, I recalled a couple of past run-ins with Venezuelan security forces.

One time I was robbed while working out in El Ávila national park. When filing the report, the police officer thought it was natural that it had happened, because “Go figure! Why do you climb all the way when there’s a cable car? Also, who works out in December?”

Or the other time, when I almost believed I was color blind after a policeman kept telling me the traffic light was red when I could swear I had seen it green. Soon enough he almost arrested me when I had the idea of telling him “give me the ticket, I’m not buying you a soda.” Yes, that is the #1 cliché of the Venezuelan police, getting a soda out of you. In other words, extortion of the small-time variety, for something as pointless as a coke.

For many years, a sector of society has justified these practices since “poor cops, they’re very poorly paid.” Others have taken advantage of the generalized environment of corruption to do whatever they want and get away with it. And the rest, myself included, have tried to believe and fight for a different scenario. Nevertheless, there I was, held up in a police station due to having had no electricity, feeling hungry, and driving properly.

“God dammit, but I didn’t do anything wrong,” I thought. “These guys were coming the wrong way, over the speed limit, with no lights, no license plate, and drunk,” I kept telling myself. Until I concluded that this was the sad reality of my country: a wonderful place where decent people always, or almost always, end up on the losing side, because reality is screaming that in order to escape unscathed you have to be a total bastard. We take it and rack up the scratches, until our skin cannot take it anymore.

After nine hours of threats and rough treatment, I decided to do something I had never done in ten years. Grab my phone and dial the numbers of all those who could perhaps help me. Why? Because of their connections inside the state apparatus.

While I did it, I felt bad. I felt that my attitude resembled those I had spent years criticizing. The “enchufados” [spoiled people with high-level connections] who pick up the phone and fix what the majority spends years trying to solve. But where was my mistake? Was it wrong that I made the calls or that I felt the need to do so? Is it wrong that I get to solve my problem or that hundreds can’t do the same? At the end of the day, the issue is that one needs a phone call to achieve what should be the norm, an efficient and fair treatment by public authorities.

A few minutes later, I was back home with a roadmap to follow in order to retrieve my car. In this process, which lasted an exact month, the police managed to “lose” the report, then the attorney general’s office could not find it in the system, the prosecutor assigned to the case did not feel like showing up, etc. I kept dialing numbers to move forward, although every step of the way I would have the different officials who dealt with me pointing out that “this case is high priority surely because this chick is sleeping with someone important…”

Truth be told, my case was not as serious as the hundreds I saw come and go in all the offices I had to go to. All in all, it was a material possession. Nevertheless, the situation in all its glory showed me the rotten insides of a system on the verge of collapse or of being overrun by its very victims. But it also showed me another important truth: amidst the rottenness I also found plenty of helping hands. A police officer who worked with Chávez and recalled this or that activity, a university activist who studied law and became a prosecutor, even a comrade from some distant struggle who remains working in a state institution. Then, and only then, I recalled and understood all those times when someone told me we should not “abandon these spaces,” to which I used to reply:

– But what’s the point of having a $10-a-month job, and on top of it so much bureaucracy and so many bosses that it becomes impossible to make any meaningful change?

Well, there is a point to it. Having people fighting to improve things inside state institutions is important and perhaps one of the few and powerful reasons why the dream of making a revolution is not over yet. Downstream there are good people rowing to have the little boat of justice move forward, even if the inequality ship is ever more visible.

Jessica Dos Santos is a Venezuelan university professor, journalist and writer whose work has appeared in outlets such as RT, Épale CCS magazine and Investig’Action. She is the author of the book “Caracas en Alpargatas” (2018) and a university professor. She’s won the Aníbal Nazoa Journalism Prize in 2014 and received honorable mentions in the Simón Bolívar National Journalism prize in 2016 and 2018.

Featured image: Jessica Dos Santos reflects on an accident and the state of the Venezuelan justice system. (Venezuelanalysis.com)