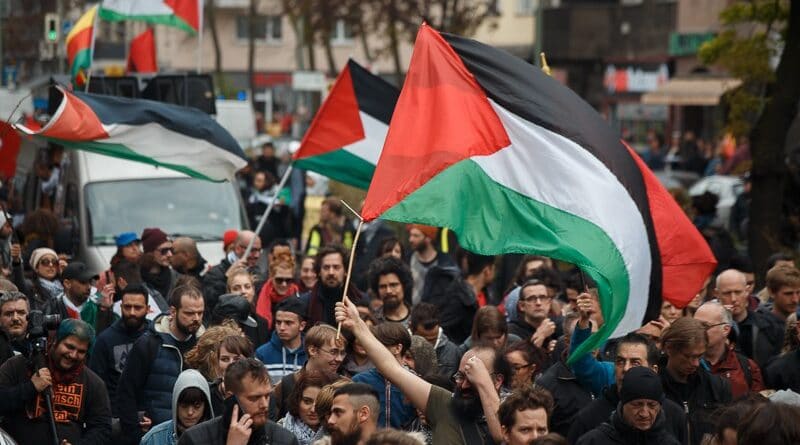 On July 7, the activist group Canadians for Justice and Peace in the Middle East (CJPME) launched a pledge in which signees committed to oppose Israel’s imminent plans to annex the Palestinian West Bank. By signing the pledge, the CJPME says that MPs are committing to push the federal government to “consider all reasonable diplomatic and economic options to stop annexation and prompt Israeli compliance with international law.”

Nearly 50 civil society organizations, including the United Church of Canada, Independent Jewish Voices and the Canadian Labour Congress have signed on. More than 60 MPs have also added their signatures to the pledge, including the entire Bloc Québécois and Green caucuses, along with 22 of 24 NDP MPs, and four Liberal MPs.

However, there were two notable NDP MPs who have refused to sign on to CJPME’s pledge—party leader Jagmeet Singh and Randall Garrison (Esquimalt—Saanich—Sooke).

Garrison has recently come under fire for his refusal to sign on to the CJPME’s pledge. On July 10, former NDP MP Svend Robinson slammed Garrison for refusing to oppose Israeli annexation. According to one Twitter user who had called Garrison’s office and spoken with a staffer, the MP has a “policy of never signing pledges because situations change.”

Congrats to the 22 of 24 @NDP MPs who have joined this call to oppose illegal Israeli annexation of the West Bank. No surprise that @r_garrison is silent. But where is @theJagmeetSingh , NDP Leader? Time to take a stand in solidarity with Palestinian people Jagmeet! #cdnpoli pic.twitter.com/BaAG2qKC7i

In response, Garrison claimed that he opposes Israeli annexation of Palestinian land and “remain[s] committed to getting Canada to work toward a two state solution where both sides can live in peace & security.”

Just called Randall's office. A staffer answered and they said he has a policy of never signing pledges because situations change. Can't see the situation changing into one where Israel should annex Palestine.

Garrison was later called out by CJPME Vice-President Michael Bueckert, who tweeted: “If you won’t support Canada taking concrete action to stop Israeli annexation, you don’t really oppose it… [Garrison] is out of step with 22 of 24 NDP MPs who signed the pledge, and 68% of NDP voters who want to impose sanctions on Israel.”

2. @r_garrison is out of step with 22 of 24 NDP MPs who signed the pledge, and 68% of NDP voters who want to impose sanctions on Israel. https://t.co/SQXap3O3sG

Garrison’s words are not matched by his actions. Garrison is the vice-chair of the Canada-Israel Interparliamentary Group (CAIL), a pro-Israel lobby group designed to promote “greater friendship” and “cooperation” between the two countries’ parliaments.

CAIL works alongside the Centre for Israel and Jewish Affairs (CIJA) and the Canadian Jewish Political Affairs Committee (CJPAC) to host lobbying events on Parliament Hill. The group regularly meets the Israeli ambassador and other diplomats. Representatives of the Group also regularly visit Israel on sponsored propaganda trips.

In 2016, Garrison attended a CIJA-organized trip to Israel, where he also was a part of the delegation to the Israeli Knesset. Canada Talks Israel Palestine, an independent think tank, reported that “These trips [are] usually labelled as ‘parliamentary missions’, opportunities to meet with stakeholders and government officials”, or trips “to increase personal awareness of the situation in the Middle East.”

However, according to Duff Conacher, co-founder of Democracy Watch—Canada’s leading citizen group advocating democratic reform—these paid trips violate ethics rules. This is significant because these trips are sponsored by an Israel lobby group and are designed expressly to sway the opinions of MPs toward supporting Israeli government policies, including the ongoing military occupation of Palestine and imminent plans to annex large swathes of the West Bank. In the words of Conacher, “Federal ethics rules say it is illegal for lobbyists to do anything that puts an MP or government official in even an appearance of a conflict of interest, and paying for an MP’s trip that costs thousands of dollars definitely crosses that line.”

Garrison has also repeatedly retweeted and ‘liked’ IDF propaganda posts on social media. He also stridently opposes the BDS (Boycott, Divestment and Sanctions) movement, and reposted an article which called BDS “cowardly and shameful.” He also favourited a tweet from extremist Conservative Senator Linda Frum, who stated, “BDS is an expression of anti-Semitism. It is nothing less than that, and our government has no business funding anti-Semitism in any form.”

Jagmeet Singh is the second NDP MP who has refused to sign the CJPME pledge. Back in 2016, when Singh was an Ontario MPP, he spoke out against an anti-BDS motion. In that same year, Singh went on a CIJA-sponsored “fact-finding mission” to Israel. Then, in June 2018, Singh refused calls for the NDP to leave the CAIL.

According to Sheryl Nestel of Independent Jewish Voices Canada, Singh has also displayed a “disconcerting lack of understanding of the plight of the Palestinian people,” and has repeatedly appeared to walk back earlier positions expressing substantive support for their cause.

In an interview with the Canadian Jewish News this January, Singh again condemned the BDS movement. He stated that it “creates tensions and divisions,” and “does not advance peace.” Singh also falsely claimed that the NDP does not support BDS, despite the fact the 68 percent of NDP members are in favour of economic sanctions against Israel.

Under Singh’s leadership, a pro-Palestine candidate was forced out after winning the opportunity to run for the party during the 2019 Federal election. Rana Zaman, who was running for the NDP in the Dartmouth-Cole riding, was ejected by the NDP national office for defending Palestinians who were killed by the Israel Defense Forces (IDF) during the 2018 “Great March of Return” in occupied Palestine.

The mainstream media and political class smeared the protesters, equating chants of “free free Palestine” to acts of anti-Semitism. Joel Roberts, a York student, reported that the media entirely ignored vicious attacks against the peaceful protesters. In an article for Canadian Dimension, Roberts described the scene:

A teaching assistant at York, was sent to the hospital with a concussion after being punched in the back of the head. Other protestors report being kicked, pulled by their hair and choked by their scarves. According to SAIA, the violence was initiated by members of the Jewish Defense League (JDL), a far-right group with links to white-supremacist organizations and that is widely considered a terrorist organization.

Jagmeet Singh and Garrison refused to make any statements in the next few days, effectively abandoning the Palestine solidarity protesters.

Most recently, the two MPs have continued the NDP’s regrettable tradition of abandoning pro-Palestine activists by failing to make any statements condemning the repeated attempts by the JDL and other Israel lobby groups to silence the owner of Foodbenders, a pro-Palestinian Toronto restaurant that openly expressed anti-Zionist political messaging on its storefront (and social media channels) this month.

Based on the political records of Singh and Garrison, it is far from surprising that they would refuse to sign onto a pledge opposing Israel’s imminent annexation of the Palestinian West Bank. The NDP’s leadership needs to reassess its position, and embody the mantle of a progressive political party that is genuinely committed to standing up for human rights, no matter how some special interest groups may respond.