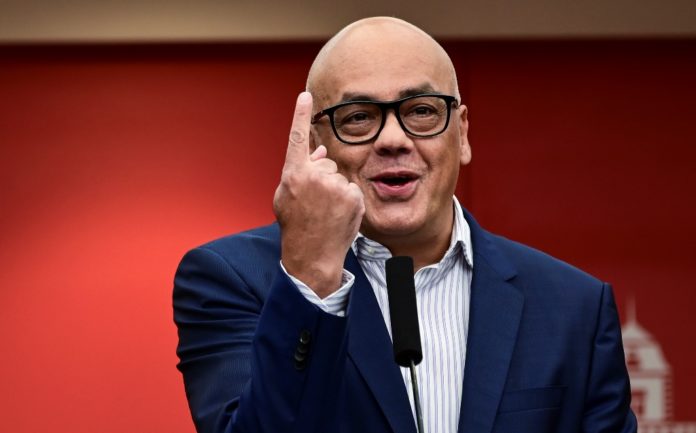 The president of the Venezuelan National Assembly and head of the delegation representing the Venezuelan government in the Mexico Talks, Jorge Rodríguez, sent a strong response to the US ambassador, James Story.

On this occasion, the head of Venezuela’s legislature was responding to comments by the Bogotá-based “diplomat,” after Story had threatened that the US—along with Canada and the European Union—would impose more sanctions against the people of Venezuela, “in the case there are not results” in the dialogue between the Venezuelan government and the opposition. The second round of talks were held in Mexico City last week. Story’s statements served to confirm US interference in Venezuela’s internal affairs.

Jorge Rodríguez, in addition to recommending calm to the “blinded” ambassador, dismantled each of Story’s arguments, listing the reasons for the failure of the interventionist policy against Venezuela:

• “It is blatantly stupid to believe, even remotely, that at this point we will yield to their pressures and threats.”

• “As long as they threaten Venezuela with more sanctions, our response will be the same. We are going to defeat them again and again in all fields.”

• “There are free elections in Venezuela, the next is this 21N [November 21 regional and municipal elections]. If not, ask your friends from the UP [or Unitary Platform, former MUD], 65,000 candidates are registered (from all the opposition factions combined).”

• “Grab your lapdogs Duque, Uribe, etc., and have a cup of valerian: we do not care about your opinion as foreigners, because this dialogue is between Venezuelans (although there are those behind the scenes in the UP, in other words, your bosses).”

RELATED CONTENT: Venezuela Produces 95% of the Rice it Consumes

This new onslaught from the White House, following agreements that have arisen from the successful dialogue process, adds to the verbal attacks by Colombian President Iván Duque. Duque, in turn, had received a forceful response from Venezuela’s President Nicolás Maduro, who denounced the machinations of the international right wing to end the negotiations and destabilize Venezuela.