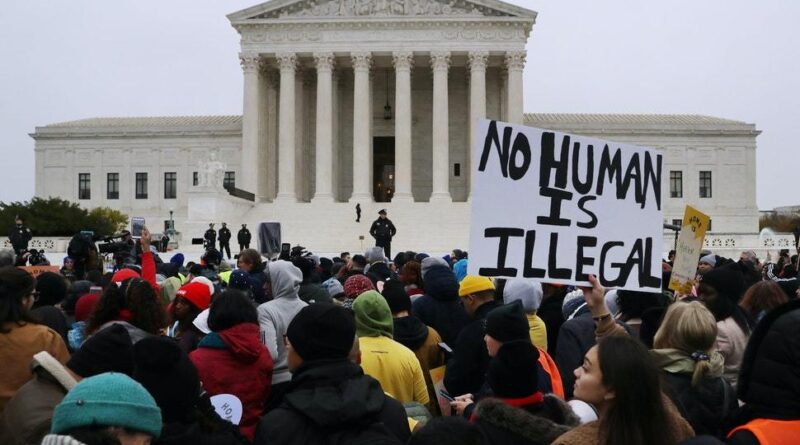 Millions of people are worried that Trump will nominate a fascist to the U.S. Supreme Court following the death of Justice Ruth Bader Ginsburg. Especially endangered are women’s reproductive rights, rights that enable women to control their own bodies.

Revolutionaries don’t sneer at these concerns. The courts are the most reactionary part of the capitalist government. Supreme Court justices have upheld jailing children in cages because they are migrants.

Hundreds of poor people have been executed because of racist judges. Troy Davis was strapped to a gurney while he waited for a stay of execution on the evening of Sept. 21, 2011.

The Black man had been framed for the killing of a Savannah, Ga., police officer. Seven of the nine witnesses recanted their testimony. Even Pope Benedict and former FBI Director William Sessions pleaded for the execution to be stopped.

That didn’t bother the handful of Supreme Court judges who ordered Georgia’s legal lynching to proceed. The racist execution was the real start of the 2012 presidential campaign.

The torture of Troy Davis — watching him die — was shared by his sister Martina Davis-Correia. She was fighting metastatic cancer while witnessing her brother being killed.

Just one more liberal judge on the high court could have saved the life of Troy Davis. But Georgia was also allowed to murder the Black man because of the Antiterrorism and Effective Death Penalty Act.

This law severely restricted the right of Troy Davis and other prisoners on death row to file “habeas corpus” petitions in order to introduce new evidence. Joe Biden voted for it in the Senate.

Democratic President Bill Clinton signed this vicious act on April 24, 1996, which was political prisoner Mumia Abu-Jamal’s 42nd birthday. Jamal’s scheduled execution had been stopped the year before by the power of the people.

It was President Clinton who nominated both Ruth Ginsburg and Stephen Breyer to the Supreme Court. In one of her last court decisions, Ginsburg joined Breyer and the five most reactionary judges on the tribunal in denying asylum to Vijayakumar Thuraisingam, a farmer from Sri Lanka.

Aaron Reichlin-Melnick, of the American Immigration Council, described the June 25 ruling as “a devastating blow to the due process rights of asylum seekers who arrive at our border seeking protection.”

Justice Sonia Sotomayor denounced this decision in a dissent joined by Justice Elena Kagan. Sotomayor wrote that it “handcuffs the judiciary’s ability to perform its constitutional duty to safeguard individual liberty.”

Rights are won in the streets

Nothing was ever given to us by the wealthy and powerful. Every right has had to be fought for.

Why did a unanimous Supreme Court outlaw school segregation in Brown v. Board of Education? It wasn’t because nine white guys in black robes had a change of heart. As California governor, Chief Justice Earl Warren had supported the racist deportation of Japanese Americans from the state.

This historic, yet limited, 1954 decision was issued as the capitalist economy increasingly needed Black workers. It was also five years after the triumph of the Chinese socialist revolution, which was a tremendous victory against racism.

Against a backdrop of anti-colonial revolts in Africa, Asia and Latin America, U.S. big business and its courts couldn’t openly defend white supremacy.

Every progressive law and court decision was the result of struggle. It was Black children fearlessly confronting police dogs and firehoses in Birmingham, Ala., in 1963 that led to the 1964 Civil Rights Act. Demonstrators beaten by Alabama state troopers in Selma won the Voting Rights Act.

Part of that struggle was in the courtroom. We honor the memory of those lawyers who were freedom fighters.

Florynce Kennedy was the second Black woman to graduate from Columbia University Law School and fought record companies for ripping off jazz artists Billie Holiday and Charlie Parker. She was one of the lawyers who successfully defended 21 members of the Black Panther Party in New York City facing 156 absurd charges of plotting to bomb buildings.

Ramon J. Jimenez led the fight to save Eugenio María de Hostos Community College in the South Bronx from closing. His law office was always open to help poor people.

Many more attorneys could be mentioned who fought for the people. Fidel Castro, Nelson Mandela and V.I. Lenin — the leader of the Bolshevik Revolution — had been trained as lawyers.

Thousands of attorneys belonging to the National Lawyers Guild and other organizations defend the poor. NLG members working as legal observers have been arrested and brutalized during Black Lives Matter demonstrations.

The work of all these advocates in the courtroom has depended on how strong the people’s movement has been at any particular time.

The legal magician Johnnie Cochran could not have saved Ethel Rosenberg’s life at the height of the anti-communist witch hunt. She and her husband Julius Rosenberg were framed on made-up charges of giving “atomic secrets” to the Soviet Union and were burned to death in the electric chair on Juneteenth, 1953.

The communist leader Vincent Copeland emphasized how profoundly anti-democratic the Supreme Court is. Nobody elects the court’s nine judges, who can serve for life, like Ruth Ginsburg did.

Copeland also pointed out that these judges were the direct representatives of the biggest capitalist families. They are groomed and monitored during their careers.

Most of the U.S. Supreme Court judges that upheld Eugene Debs’ conviction for ignoring an injunction during the 1894 railroad strike had been lawyers for the rail lines. How about that for a conflict of interest?

As a socialist leader who had won the votes of hundreds of thousands when he ran for president, Debs would later be jailed for giving a 1918 anti-war speech. He compared a five to four decision by the high court throwing out a law banning child labor to a craps game. That act of free speech was considered blasphemy.

The Supreme Court during the 1920s was just as reactionary. Its anti-labor decrees were overturned by the working-class upsurge of the 1930s.

The courage of Colin Kaepernick in protesting police brutality is more important than all the judges put together. Judge Ruth Ginsburg attacked Kaepernick for his actions although she had the decency to later apologize.

It’s the Black Lives Matter movement with more than 20 million people who have joined in the demonstrations that is changing U.S. politics. As dangerous as Trump’s pick for the Supreme Court will be, the people can fight back.

Both the U.S. Supreme Court and the U.S. Senate are undemocratic and need to be abolished. Only by bringing millions of more people into the struggle will we defeat all the Trumps.