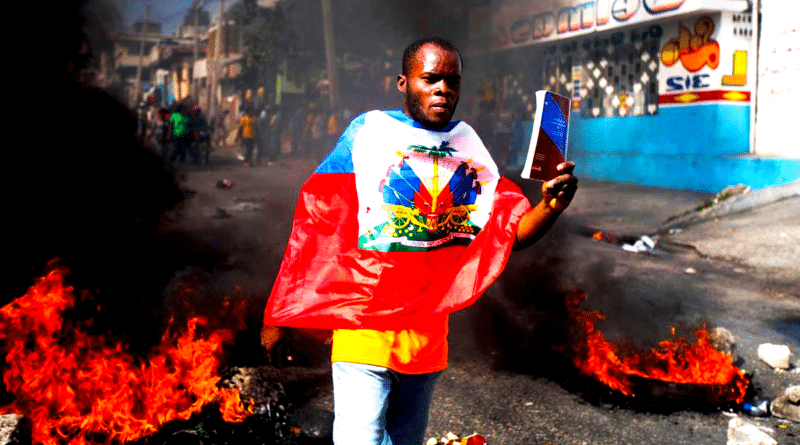 In Honduras, thousands are protesting Juan Orlando Hernández and his National Party government. In Brazil, huge demonstrations are being held against Jair Bolsonaro and his fascist policies. In Colombia, protests continue to grow against Iván Duque and his Uribista Democratic Center party. In Chile, there are almost daily confrontations with Sebastián Piñera’s Carabineros, the country’s national police force. In Ecuador, demonstrations against Lenín Moreno’s neoliberal reforms continue.

Despite minor circumstantial differences, all of these uprisings are essentially fighting for the same things. They’re fighting for an end to Black and Indigenous people being murdered for defending their communities. They’re struggling to remove corrupt politicians who allow multinational companies to exploit their land, people and resources. They’re opposing the privatization of public resources and cuts to existing public healthcare, education and housing. They’re resisting police violence and violent death squads propped up by Western countries.

Most importantly, they’re fighting for freedom. Poor and oppressed people in these countries are battling to liberate themselves from the horrors and constraints of the global capitalist-imperialist system. They want a new system, a new way of life, in which they’re free to live in peace, prosperity and dignity.

As Latin American and Caribbean revolutionaries, we should unquestionably support these uprisings. While variances exist in tactics and demands, they’re all challenging the same capitalist-imperialist system that is oppressing our continent. However, we should also show equal support for another uprising in our motherland that unfortunately isn’t getting much attention — both by mainstream media and the Latin American Left. I’m talking about the uprising in Haiti against Jovenel Moïse, who oversees a violent, unpopular and right-wing regime.

Moïse was handpicked by Michel Martelly, another sellout president, who founded the Haitian Tèt Kale Party, known as the Bald Headed Party. Their party name suits them well — not only because they are both bald headed, but also because they’ve left their country bald. Under their administrations, multinational corporations have looted Haiti’s land, people and resources under the guise of “free trade.” From 2011 to 2016, when Martelly was in power, protests against the Bald Headed Party were beginning to gain steam. By 2018, just a year after Moïse took power, the protests evolved into a full-blown uprising that continues to this day.

In November 2017, Haiti’s Senate released the findings of an investigation it conducted from 2008 to 2016. The investigation revealed that under Martelly’s administration, with the complicity of Moïse, billions of dollars were stolen from Haiti’s division of the Petrocaribe program. Petrocaribe is an 18-member Caribbean oil alliance founded in 2005 by former Venezuelan President Hugo Chávez. It provides member states with access to cheap oil with little money down and low-interest loans. Petrocaribe’s payment configuration allows member countries to buy oil at market value for 5 to 50 percent up front. With a grace period of one to two years, the balance can be paid through a 17-25 year payment agreement with one percent interest if oil prices are above $40 per barrel. Its model is based on socialist cooperation and mutual economic development among Caribbean nations. However, Martelly and Moïse took advantage of this agreement, deciding to line their own pockets instead.

In March 2018, when Venezuela halted oil shipments to Haiti, fuel shortages arose and the masses began speaking out against the government. Four months later, in July 2018, fuel prices jumped by as much as 50 percent, bringing the country to a standstill as no one could afford the increase. Across Port-au-Prince, the nation’s capital, thousands of people hit the streets in protest. Clashes between protesters and police got so bad that international airliners issued travel advisories and canceled flights to Haiti. Scared shitless, Moïse’s government eased the tax increases and dropped Jack Guy Lafontant as Prime Minister, replacing him with Jean-Henry Céant.

In November 2018, after protests had somewhat slowed down, armed thugs connected to Moïse’s government brutally killed up to 25 people in the Lasalin area of Port-au-Prince. Women and men were hacked to death by machetes. Bodies were burned, some while they were still alive. Some of the bodies were left on the street to be eaten by wild pigs and dogs. To make matters worse, their homes were burned down. Women whose partners were killed in Lasalin were left homeless with children to feed. Lasalin is considered to be the poorest community in Haiti, which is already the poorest nation in the Western Hemisphere, making it ground zero for class struggle in our continent. It has a long history of revolutionary struggle and is the base of support for former President Jean Bertrand Aristide and his Lavalas party. In Kreyol, Lavalas means flood, alluding to the masses of poor and oppressed people who have frequently shut the entire country down in rebellion. Lasalin, which borders the Caribbean Sea, is also where enslaved Africans were first brought to what is now Haiti under French colonialism.

In 2019, as corruption and state-sanctioned violence continued under Moïse, so did the freedom struggle of the people. That year, major protests took place in February and October, in which hundreds of thousands of Haitians flooded the streets of Port-au-Prince in protest against the government. Dozens, if not hundreds, of people were killed by police, including journalists and activists. According to numerous reports, U.S. mercenaries were also present in Haiti during the protests in order to defend Moïse and repress protesters. Among these criminals were two former Navy SEALS, a former Blackwater employee, and two Serbian mercenaries based in the United States. These stooges of imperialism were reportedly protecting the former head of the National Lottery, who was planning to transfer $80 million from a PetroCaribe bank account to one entirely owned by Moïse. By November 2019, schools, businesses, courts and most public services were entirely shut down.

Most recently, on Sept. 15, 2020, hundreds of Haitian police officers defected and joined civilians in protest against the Moïse regime. Many of them were reportedly armed and wearing masks and set cars on fire as they spoke out against the current government. This marked a major turning point in the ongoing Haitian uprising, considering that many of these police officers once had their guns turned the other way at protesters. As history has shown us, when warlords are unable to keep their soldiers fed and paid, those soldiers often turn on their former leader and side with the people against the tyrant. This happened in Russia, China, Cuba, and countless other nations with successful revolutions.

To this day, people are still out on the streets in Haiti protesting their corrupt and violent government. Unfortunately, most of this has gotten little support from the Latin American Left, which is still struggling to overcome the imposed legacies of racism, chauvinism and bourgeois nationalism. Also forgotten is the long history of Haiti’s revolutionary contributions to the liberation of oppressed Latin American and African peoples. Let’s not forget that in 1804, Haitian revolutionaries Jean-Jacques Dessalines and Toussaint Louverture led the liberation of their country from French colonialism. Haiti became the first independent nation of Latin America and the Caribbean, the first Black-led Republic, the first nation to abolish slavery, and the only nation in history constructed by a successful revolt of enslaved people. Furthermore, many of the struggles against Spanish colonialism in Latin America were aided and inspired by the Haitian Revolution.

It’s time for us as Latin American revolutionaries to show our Haitian sisters and brothers the respect they deserve and support their freedom struggle. There is much to be learned from the people of Haiti, who are the poorest and most oppressed in the Western Hemisphere. Ultimately, if Haiti isn’t free, Latin America isn’t free. As the great Ernesto “Che” Guevara said: “There are no borders in this struggle to the death. We cannot be indifferent to what happens anywhere in the world, because a victory by any country over imperialism is our victory, just as any country’s defeat is a defeat for all of us.”