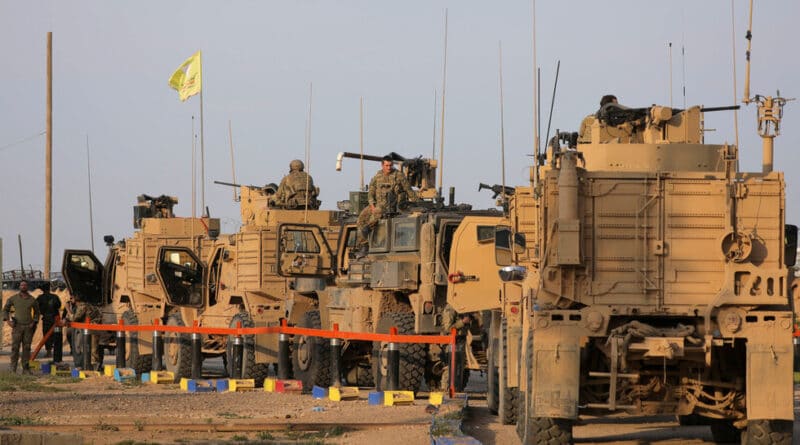 Syria’s petroleum minister has condemned US forces for acting “like pirates” as Washington continues to plunder most of the oil wealth from the country’s resource-rich northeast, where the Pentagon backs Kurdish militia groups.

“Americans and their allies are targeting the Syrian oil wealth and its tankers just like pirates,” Petroleum and Mineral Resources Minister Bassam Tomeh told state TV this week, adding that the move is designed to cripple Syria’s economy, which depends on oil revenues.

“What has happened all through [the] Syria war has not happened in any country, in terms of preventing us from tapping our wealth resources and at the same time stopping basic commodities from reaching our country.”

Tomeh said that the total damage inflicted on the Syrian petroleum sector due to the US occupation exceeds $92 billion, noting that Washington currently controls 90% of the crude oil resources in the northeast region.

In an interview last month with the Lebanese newspaper al-Akhbar, the governor of the northeastern Hasakah province, Ghassan Khalil, said that US-backed Kurdish militants were stealing 140,000 barrels of crude oil every day from fields in the area. He claimed the fighters then used tankers to smuggle the oil across the border into Iraq.

RELATED CONTENT: US Bombs Syria and Ridiculously Claims Self Defense

Since at least 2015, the Pentagon has offered direct support to the Syrian Democratic Forces, a Kurdish-dominated faction that controls significant territory in the northeast. The US itself maintains a force of around 900 troops in the country, most embedded alongside the SDF.

Tribes along the Euphrates River in Syria held a demonstration against US military forces and their allies over their control and theft of Syria’s oil and gas fields https://t.co/5I12ZpjZBH

While US officials maintain that the military presence in Syria, which is illegal under international law, is meant to prevent the resurgence of Islamic State (IS, formerly ISIS), former President Donald Trump often spoke candidly about desires to grab the country’s oil wealth.

“We’re keeping the oil – remember that,” then-President Trump said in October 2019. “I’ve always said that: ‘Keep the oil.’ We want to keep the oil. Forty-five million dollars a month? Keep the oil.”

Though Trump largely abandoned former President Barack Obama’s push to overthrow Syrian President Bashar Assad – which saw the US pour hundreds of millions of dollars into jihadist-linked militant groups – he repeatedly defended the occupation of oil fields while expanding that policy.

Last year, the Trump administration facilitated a deal between the SDF and an American oil firm named Delta Crescent Energy, according to Politico and other outlets. The company is headed up by a former US ambassador to Denmark, James Cain, as well as a retired officer in the Army’s elite Delta Force and a former UK oil executive. Protesting the continued looting of the oil fields, Damascus slammed the agreement “in the strongest terms,” calling the contract “null and void.”

While the Joe Biden administration has signaled that it would no longer prioritize the occupation of Syrian oil resources, just last month, local Arabic-language media reported US forces were constructing a new airport alongside the al-Omar oil field, where Washington maintains a military installation. Around the same time, Pentagon spokesman John Kirby clarified that the DOD is barred from cooperating with energy companies on the ground “except where appropriate under certain existing authorizations,” suggesting Biden may continue the practice on a limited basis. A spokesman for the US-led coalition, Colonel Wayne Marotto, reiterated that stance more recently, though did not mention the loophole cited by Kirby.

The SDF, as part of the #defeatdaesh mission, (with the support of @CJTFOIR) secures critical petroleum infrastructure in NE Syria to deny Daesh access to critical resources & revenue. pic.twitter.com/JhllDWckaB

Syrian officials, including President Assad himself, have condemned Washington’s oil theft on a number of occasions, even vowing legal action. Soon after Biden’s inauguration, Syria’s UN envoy, Bashar al-Jaafari, pleaded with the new president to withdraw US forces and cease occupying the oil fields.

“The new US administration must stop acts of aggression and occupation, plundering the wealth of my country, withdraw its occupying forces from it, and stop supporting separatist militias, illegal entities, and attempts to threaten Syria’s sovereignty,” Jaafari said.

Biden has so far shown little interest in pulling out of Syria, launching a series of airstrikes on militia groups based in the country last month, though US officials have nonetheless said they are reviewing the troop presence there.

The decade-long war has taken a massive toll on Syria’s oil sector, underscoring the cost of the continued American occupation. According to a report by British Petroleum, overall oil production dropped by more than 90% between 2011 and 2019, or from 353,000 barrels per day to just 24,000.