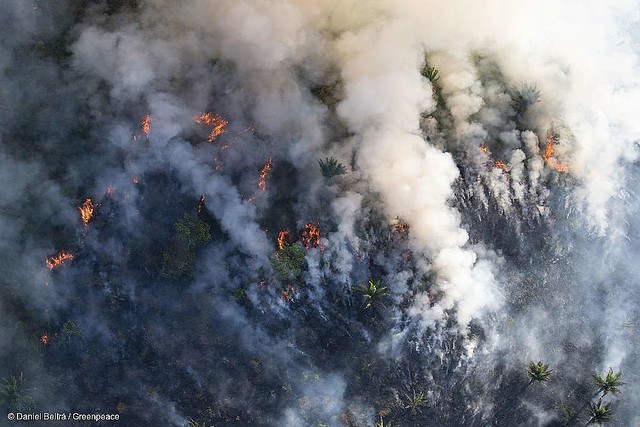 Over the past few days, peoples and governments from around the world have been witnessing the consequences of the recent and serious crimes committed against the Amazon rain forest. The thick clouds of smoke that covered the southeast of Brazil, especially São Paulo, are a direct result of the dramatic increase of fires set in several parts of the forest and transition areas with the Cerrado tropical savanna.

It should be clear for society in Brazil, Latin America, and the world that this is not an isolated phenomenon. In fact, it is the result of a series of actions taken by agribusinesses and big miners since the beginning of the Jair Bolsonaro administration, which has been actively supporting and encouraging them. After nearly two decades of reduction in deforestation, the country’s current president and his environment minister, Ricardo Salles, engaged in a violent rhetoric against Brazilian environmental conservation legislation and mechanisms, while also increasingly targeting and criminalizing those who have historically protected the Brazilian biomes – peasant families and indigenous peoples.

Since the transitional government, the rhetoric in Brasília has been about attacking environmental licensing and state monitoring and control over agribusiness and mining activities – which are actually elements that could have helped prevent the criminal Mariana and Brumadinho dam disasters in Minas Gerais. Meanwhile, the government has handed over the Brazilian Forest System to members of the powerful farm lobby, implemented a military intervention in the Chico Mendes Institute (ICMBio), and forbidden the Brazilian environmental agency from conducting inspections, as well as openly attacked public servants who work for all these institutions. As virtually all funds have been cut by the neoliberal policy headed by the economy minister Paulo Guedes, the situation is completely unsustainable.

Traditional peoples and communities in the Amazon region started in 2018 to report that they were being targeted by big land owners and the police. Socioenvironmental NGOs are also being criminalized and targeted by this government. Finally, scientists with several organizations, universities, and even the world-renowned National Institute of Space Research (INPE) started to report and denounce the consequences, but they were faced with layoffs and orders forbidding them from disclosing research data. The answer of countries like Norway and Germany to this brutal change in the Brazilian government policy was to halt Amazon Fund donations, to which the Bolsonaro administration replied with disdain and completely unfounded accusations.

The magnitude of this crime against humanity is alarming. This year alone, more than 70,000 fires were recorded, 33,000 of which in the Amazon. That’s a 60-percent on average over the last three years. Between Aug. 10 and 11, that increase skyrocketed to 300 percent, when the agribusiness in the region announced they would organize a “fire day,” coordinating a massive burnoff of trees. Satellite images also showed fires spreading at rates that had not been seen since the 1980s, when artisanal miners operated illegally, especially in indigenous territories.

These actions, which are completely supported by the current Brazilian government, must be acknowledged as a crime against humanity and an irreparable damage to the Brazilian people and nature. In times when the world is facing the consequences of climate change, this attitude is completely unacceptable.

Let us also remember that the Amazon is not a “wild” territory, but a hugely diverse region in terms of biodiversity and peoples. For thousands of years, different forms of living with this biome have produced the commons that cannot be separated from the forest. There is no Amazon rain forest without its peoples, nor do we exist without it. The conservation of the Amazon can only be possible by defending the indigenous and traditional territories, agroecology, and health care, culture, and education policies that are focused on the peoples of this region.

This is why we, the peasant organizations of La Via Campesina, expose the real culprits behind this crime of historic proportions: the agribusiness and mining industry, supported by the Bolsonaro administration. We demand these environmental crimes to be immediately fought, while also demanding that the peoples of the Amazon have their rights respected as the forest’s true and ancient protectors. It is key that all Brazilian society stands up against this atrocity! The Amazon is a territory of life, food, water, and cultures, not destruction, death, and exploitation!