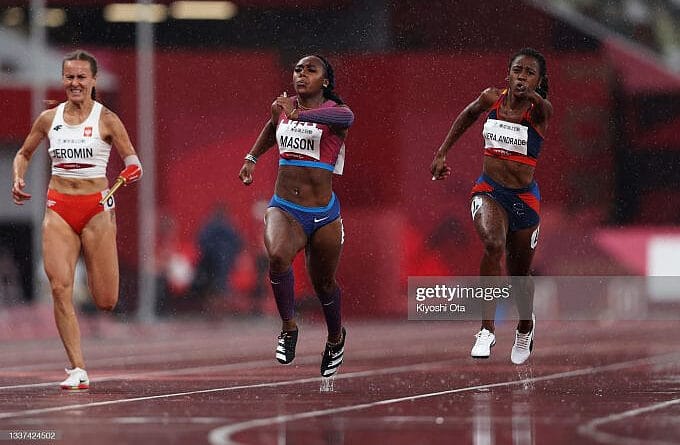 In just one hour and under heavy rain, two gold medals were achieved by Venezuelan Paralympic athletes at the Tokyo 2020 Paralympic Games—for the first time in history. Runner Linda Pérez earned first place in the 100 meters of athletics, category T11, setting an impressive time of 12.05 seconds. Minutes later, Lisbeli Vera ran in the final of 100 meters of athletics, category T47, and in a spectacular and exciting photo finish, with a time of 11.97 seconds—the same time as US’s Brittni Mason—Vera was awarded the gold medal. As a result Venezuela’s national anthem rang out twice on the Paralympic podium in one journey, for the first time in history.

At seven in the morning, Venezuela time, Linda Pérez ran with her guide, Álvaro Cassiani Herrera, in the final of the T11 category, which includes people with visual disabilities, who are completely blind or perceive light, but do not have the ability to see the shape of a hand at any distance.

The young Pérez competed against China’s Liu Cuiqing, and Brazil’s Jerusa Geber Dos Santos and Thalita Simplicio Da Silva. In the race, Dos Santos let go of her guide and did not finish, and Da Silva was disqualified, so the Venezuelan got on the podium accompanied only by the Cuiging, who finished in second place.

Lisbeli Vera and her spectacular victory
Minutes later, it was the turn of Lisbeli Vera, who ran in the final of the 100 meters of athletics in the T47 category (for athletes with an amputation or deformity in an upper limb).

In the qualifiers, held earlier (Monday night, Venezuela time), Vera managed to finish first in the race along with seven other competitors, setting a masterful time of 12.14 seconds. In the other qualifying round, the US athlete Brittni Mason finished first with 12.07 seconds—a difference of only seven hundredths of a second between the two—which already portended an epic duel.

And so it was. This Tuesday morning, Venezuela time, under the incessant rain in Tokyo, the eight competitors threw themselves into the ring. Mason dominated the competition for the first 50 meters with Vera on his heels just inches away.

However, in the last few meters Lisbeli accelerated and both achieved an extremely emotional photo finish that had yet to be seen in the games, as both finished with a time of 11.97 seconds.

It took several tense minutes of deliberation by the judges before the photograph finally determined that the winner had been the Venezuelan.

In total, Venezuela has now earned six medals in these Paralympic Games to date.

• This August 31, the Venezuelan Luis Felipe Rodríguez Bolívar achieved a silver medal in the men’s T20 athletics final, by running the 400 meters in 47.71 seconds.
• Hours earlier, Venezuelan Alejandra Pérez achieved third place in the 400-meter final, T12 category T12.
• On August 28, Lisbeli Vera won a silver medal in the 400-meter track and field competition, category T47.
• On August 26, the athlete Clara Pérez won the first medal for Venezuela in these Paralympic Games, by lifting 97 kilograms in weightlifting (paralympic powerlifting), in the -41 kilogram division.

At these Paralympic Games, as in the prior edition at Rio de Janeiro in 2016, six medals have now been achieved. However, the Tokyo Games are not yet complete. In any case, the most salient news was that, beyond the medals obtained, it marked the first time that Venezuela’s national anthem, Gloria al Bravo Pueblo, was heard twice in one day.

With the gold medal added to the silver she had already won, Lisbeli Vera became—like Yulimar Rojas in the Olympic competition—the best Venezuelan Paralympic female representative in history, surpassing the judoka Naomi Soazo, who earned a gold in London 2012.

Another highlight of the day was the silver obtained by Luis Rodríguez in athletics 400 meters, category T20, the first to achieve it in that distance for the country. Venezuela’s Alejandra Pérez also brought home the bronze in the athletics 400 T12 event.

Thus, alongside paralympic powerlifter Clara Fuentes, Venezuela’s six Paralympic medals can be added to the four achieved in the conventional Olympics to bring to 10 the total in this cycle, despite being blockaded.

Venezuela is currently in box 32 of the Paralympic medal table, with its two golds, two silvers and two bronzes. China leads with 62 golds, 38 silvers and 32 bronzes for a total of 132 medals.

It should be noted that four Paralympic diplomas were also achieved in one day, by Greilys Villarroel, Belkis Mota, Wendis Mejías, and Norkelys González.

In the Latin American region, Venezuela is represented in the medal table behind Brazil, Mexico, and Colombia so far in Tokyo 2020. Historically, Venezuela has accumulated 23 medals in the 10 Paralympic Games in which it has participated, including three golds, seven silvers and thirteen bronzes.