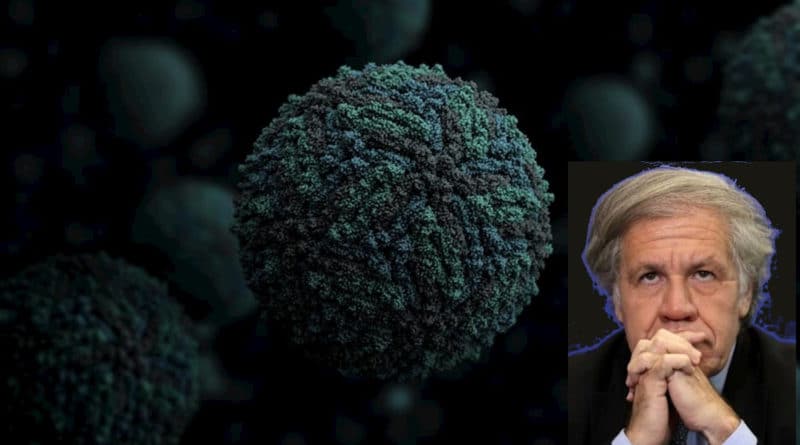 Amidst increasing concerns over coronavirus, which had led representatives of 17 Latin American and Caribbean countries to – unsuccessfully – request the deferment of the General Assembly of the Organization of American States (OAS) meeting, Uruguay’s Luis Almagro was re-elected as the Secretary-General of that Pan-American agency, a post he has held against all odds since 2015 when he replaced Chile’s Jose Miguel Insulza.

Despite an abundance of condemnation of Almagro’s management role (a large number of social organizations have commented, in a variety of ways, that instead of promoting peace, solidarity and integration among nations, he has been one of the greatest factors of instability, division, and confrontation on the continent) it was not enough to prevent 23 out of 34 member states countries of the agency voting for his reelection. However, ten others voted instead for the former Ecuadorian foreign minister Maria Fernanda Espinosa, a diplomat who headed the United Nations General Assembly 2018-2019 and who was seen by those who voted for her (Mexico among them) as a person capable of bridging the divides that Almagro’s often clumsy declarations provoked at the OAS. There were a total of 33 votes, as the representative of the Dominican Republic was not able to attend the election. Close to the seat of the OAS, based in Washington, U.S. President Donald Trump, just a few blocks away, must have rubbed his hands together in satisfaction because the reelected secretary was, without a doubt, his groomed candidate. Earlier this year, the indescribable US Secretary of State Mike Pompeo, said that Almagro has a real grasp on the values of freedom and democracy.

It’s a fact that the OAS, since its creation in 1948, has always functioned in the interests of successive U.S. presidents, from the expulsion of Cuba to the various armed interventions by the United States in the region, including the recognition of governments frowned upon by the White House as being communist.

All of this doesn’t mean that there is not still the frustrated hope that one day the organization will actually serve as it charter states that it should, including achieving an order of peace and justice in the region, fostering solidarity, strengthening collaboration and defending sovereignty, integrity, and independence among its member states, among others, that currently it never does.

It has been precisely the anti-communist rhetoric of Almagro that has sown the seeds of discord within the jurisdiction of the OAS, saying for instance that the real coup d’état in Bolivia did not take place with Jeanine Añez’s rise to power but when Evo Morales won the presidential elections; or that the protests in Chile against the Sebastian Piñera Administration were the result of harmful foreign influences instead of the people’s unrest.

That is why the Mexican ambassador’s intervention at the OAS Permanent Council meeting was a glowing gesture of Mexico’s diplomacy when she said that with Luis Almagro’s re-election, the OAS celebrates nothing, except the triumph of policies bad for democracy and confrontation between states.