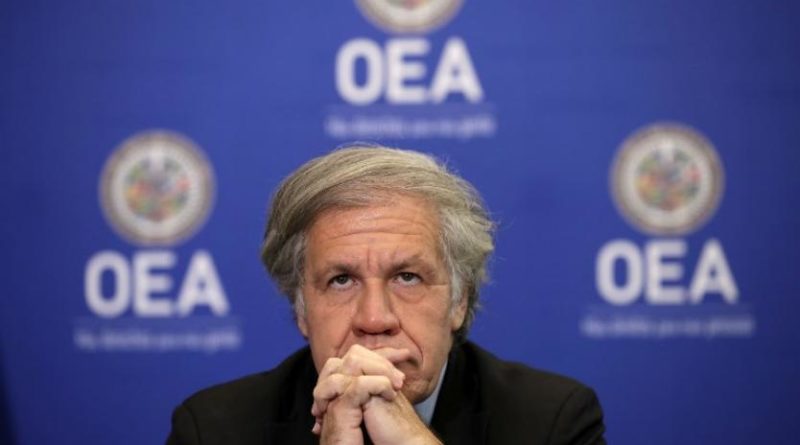 Luis Almagro has been reelected at the head of the @OEA_oficial. This victory of the regional ideological right and the Trump administration is, in reality, pyrrhic. I maintain that Almagro’s continuity in the OAS will cause irreversible damage to the organization.

The OAS was for many years an organization dedicated to projecting to the world the consensus between the United States and Latin American elites in the fight against “communism.” The OAS served, in essence, to unify the hemisphere behind the leadership of the United States during the Cold War. For this reason, Cuba was expelled from the OAS in 1962 on the grounds that “Marxism-Leninism is incompatible with the inter-American system.” In contrast, none of the bloodiest Latin American dictatorships – some even genocidal – were expelled from the organization. On the occasions when Latin America dared to rebel within the OAS (such as in the Falklands War in 1982 or in the US invasion of Panama in 1989-1990), the US simply acted as unilaterally, ignoring the resolutions passed by the body.

When the Cold War finally ended, the OAS entered into a deep crisis. It already seemed to play no role. And Latin Americans, committed to the Washington Consensus and neoliberal structural adjustments, paid more attention to the IMF, the World Bank or the Inter American Development Bank (IDB). Latin Americans and the Caribbean seemed to even bet more on subregional organizations such as CAN (created in 1969), CARICOM (1973), MERCOSUR and SICA (1991). And in the resolution of international conflicts, the Holy See came to weigh more than the OAS itself.

Faced with this situation, the OAS sought to reinvent itself. It did so by holding on to various initiatives. One, in particular, was electoral observation. Launched in Costa Rica in 1962, it was a fundamental niche for the OAS during the democratization stage of the region in the 1980s and 1990s. With the political turn towards progressivism in Latin America in the first decade and a half of this century, the OAS began to distance itself from its historic submission to the United States. For the first time, a Secretary General not supported by Washington was elected in 2005 and reelected in 2010. In 2009, the OAS invited Cuba to rejoin the organization. Havana appreciated but declined. The same year, Honduras was suspended after the coup against President Zelaya. It was only reinstated after an agreement that allowed Zelayas return to the country. The progressives, still suspicious of the OAS and the power of the United States, chose to create other spaces for regional integration and political agreement, such as UNASUR (with a constitutive treaty and the promise of building various institutions of regional governance) and the CELAC. But the return of the right in the region frustrated these regional initiatives. Almagro became the great puppet of the Trump government in the hemisphere and chose to dedicate himself fully, above all other tasks, to achieving regime change in Venezuela. Almagro supported the illegal US sanctions (those that have caused tens of thousands of deaths, see https://t.co/5rE3OrVmyO?amp=1), echoed the US threat that “all options [including the military] are on the table” scaring some allies along the way. In April 2019, Almagro finally managed to divide the Caribbean and achieved something unprecedented in OAS history: that a self-proclaimed government (Guaido’s) that does not exercise any sovereignty can take the place of a sovereign State on the Permanent Council of the OAS. Logically, this violation of international law sets a dire precedent. Never before has a government in the shadows, or in exile, or that does not exercise power in the territory, been recognized as a representative of a State before the Permanent Council of the OAS.

RELATED CONTENT: No One Surprised by Almagro’s Reelection in the OAS in the Midst of a Health Emergency Almagro also had no interest in denouncing the human rights abuses committed by various governments during the 2019-2020 anti-neoliberal protests in Haiti, Ecuador, Chile or Colombia. Nor did he criticize the Salvadoran president for having sent the military to take over the Congress. Almagro played an especially nefarious role during the days of the 2019 coup in Bolivia. Using the electoral observation tool (which the OAS had carefully cultivated to regain prominence), Almagro managed to promote the fraud story. Various studies (see, for example, here: https: //cepr.net/press-release/new-study-of-cepr-shows-what-the-oea-misrepresents-data-and-evidence-in-its-final-audit-report-for- justify-accusations-of-fraud-in-the-bolivian-elections /…) have shown that the OAS was never able to demonstrate intentional manipulation of the electoral results in Bolivia in the 2019 presidential elections.

But Almagro and his acolytes squeezed what little credibility the OAS had left, using the technical reputation of its flagship department, DECO (in charge of electoral observation), to justify the regime change.

Here, impartial technicians with the “pitita” (aka Almagro) Almagro finally managed to return the OAS to the Cold War. It is this neo-McCarthy fervor and the renewed monroism of the United States in its recovered “backyard” that Mike Pompeo celebrated, in his January speech, praising the return “of the spirit of the OAS of the 50s and 60s.”

The problem is that the Almagro OAS outrages many Latin American and Caribbean political actors. Progressives but also several centrists, eager for diplomacy and multilateralism, are concerned with belligerence, polarization, and exacerbation of conflicts. Far from “reinventing itself” to be more neutral and impartial, the OAS returned to its more reactionary instincts. For this reason, when the political sign changes again, the many outraged in our region will think twice before granting a leading place to this organization. Almagro and Trump’s unilateralism is, in the end, an historical error. It ratifies the urgent need for greater Latin American unity and integration. And it calls into question the relevance of an anachronistic OAS, based in Washington, for the future of our region.