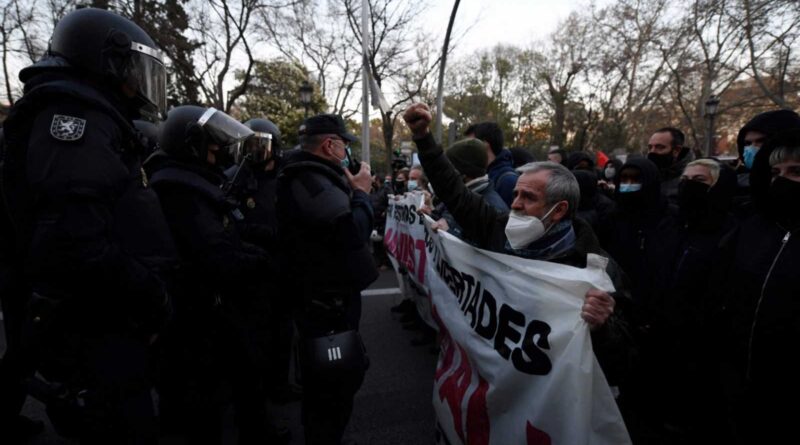 Hundreds of people demonstrated in various cities of Spain including Madrid, Barcelona and other Catalan cities, demanding freedom for musician Pablo Hasél one month after his imprisonment.

According to Spanish public television channel TVE, about a thousand people gathered at around 7 p.m. local time in the Carlos V Square of the capital in a demonstration that had not been authorized by the government.

At the protest called by the Anti-Repression Movement of Madrid and other groups, Hasél supporters demanded once again that the musician be released from prison. At present, Hásel is serving a nine-month sentence for crimes of glorification of terrorism and insults to the monarchy.

The evidence for the charges against the Spanish rapper were the lyrics of his songs and dozens of tweets. His conviction and arrest caused a wave of social indignation and a movement demanding freedom of expression.

The organizers of the Madrid demonstration called it off shortly after 8 p.m., after having tried to leave the square where they were intercepted by agents of the National Police.

At the same time, around 200 people gathered in the Plaza Universidad de Barcelona to demand the release of the artist and in defense of freedom of expression.

RELATED CONTENT: Pablo Hasel and Freedom of Speech for Communists

The protesters marched peacefully through the city center in the midst of a heavy police presence, according to images broadcast on Catalan television TV3.

Smaller demonstrations also took place in the Catalan cities of Tarragona and Girona.

After Hásel’s arrest on February 16, various cities throughout Catalonia and Spain turned into centers of huge and sustained protests. The rapper was arrested at the University of Lleida in his hometown, where he had barricaded himself for 24 hours, surrounded by supporters and students of the university.

The incidents at that time resulted in 142 arrests throughout the region and significant unrest in the center of Barcelona, ​​where there were violent altercations between protesters and the police, burning of garbage vans in the streets, attacks on bank headquarters and looting of shops and supermarkets in response to extreme police repression.

Featured image: Protesters in Spain demanded the release of Pablo Hásel one month after his detention. Photo courtesy of Sputnik.