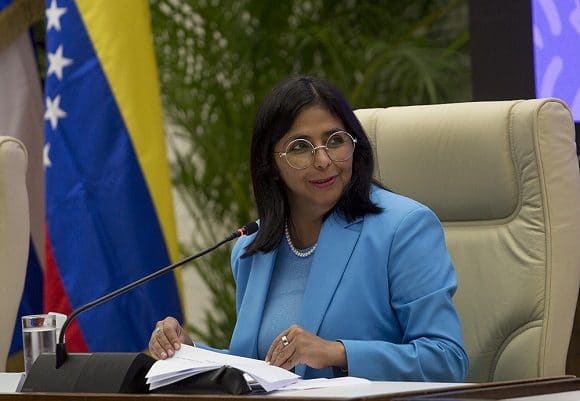 The executive vice president of Venezuela, Delcy Rodríguez , presented this Saturday in Havana the Constitutional Anti-Blockade Law for National Development and the Guarantee of Human Rights , decreed last October by the National Constituent Assembly of the South American nation.

Published in the Official Gazette of the Bolivarian Republic of Venezuela, the law aims to mitigate the effects of unilateral coercive measures by other states against Venezuela and its population.

On a government visit to Cuba , the Venezuelan vice president affirmed that her country began to learn of “unilateral coercive measures without support in International Law as of 2013.”

Rodríguez recalled that Commander Hugo Chávez warned of the approach of an economic war against Venezuela, which is intended to asphyxiate the country economically and prevent any type of foreign exchange.

Specifically, article 3 of the Constitutional Anti-Blockade Law highlights the following as a purpose: to guarantee the full enjoyment of the human rights of the Venezuelan people in the face of this type of measures and other restrictive or punitive measures against the country; promote national economic development to generate sources of work and raise the standard of living of the population; as well as ensuring the right of the Venezuelan people to self-determination.

“We are sharing relevant information about the illegal sanctions against Cuba and Venezuela,” Rodríguez highlighted in her exchange with the press, at which point she condemned the United States blockade against Havana and Caracas, and the inclusion of the island in the unilateral list from countries sponsoring terrorism.

The Venezuelan vice president pointed out that the Anti-Blockade Law constitutes its own path, “where Cuba can also have space, like other countries that approach the rules of International Law and interact in commercial, financial and economic spheres without restrictions.”

As for the new US government that will take office on January 20, Delcy Rodríguez said that they expect from it the establishment of diplomatic channels for respectful dialogue.

Likewise, the vice president of the Bolivarian nation asserted that her visit to Cuba shows once again that no obstacle has been able to with the relationship and cooperation between the island and Venezuela.