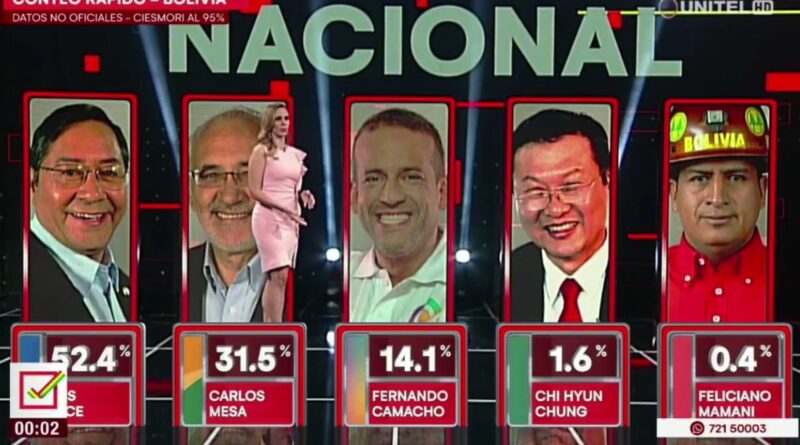 Caracas, October 19, 2020 (OrinocoTribune.com)- After several hours of delaying exit poll results, scheduled for 8:00pm, major TV stations, even those unsympathetic to Luis Arce, Evo Morales, and their party Movement for Socialism (MAS), announced that MAS candidate Luis Arce won the presidential elections by a landslide in the South American country.

Luis Arce won with 52.4%, Carlos Mesa is shown in second place with 31.5%, with more than 20% gap dividing the two. Extreme right-wing candidate Fernando Camacho finished in third place with 9.9% of the exit polls.

Bolivia's leftist presidential candidate Luis Arce, from the Movement Toward Socialism (MAS) party, won in a landslide with 65.3% in the capital La Paz and 63.1% in the major city Cochabamba, according to the exit polls pic.twitter.com/B1pgiXJKZG

Former Bolivian president Evo Morales, one hour before the release of the exit poll results, held a press conference from Buenos Aires and, in a celebratory tone requested the release of the preliminary results. After being forced to resign in 2019, Morales traveled to Mexico, who granted him asylum, and a few weeks later moved his operational headquarters in Argentina to be closer to his family and to Bolivia.

Immediately after major local news channels began making the results public, Luis Arce and David Choquehuanca, his vice presidential running mate, held a press conference from the MAS headquarters in La Paz thanking the Bolivian people for their bravery and stating that “democracy has won” in Bolivia.

RELATED CONTENT: This is how Bolivia’s Presidential Favorite Cast his Vote Earlier Today – No Major Incidents of Violence

Luis Arce was Evo Morales’ minister of economy and many associate him with the flourishing of Bolivia’s economy while Evo Morales was president. During Jeanine Áñez’s de facto government, the economy of Bolivia had deteriorated to unimaginable levels and with their terrible handling of the COVID-19 pandemic, many Bolivians -even from urban areas- missed the government of Evo Morales.

MAS Candidate @LuchoXBolivia addresses the country after exit polls announce him as the winner in Bolivia's presidential elections: "Democracy has won" pic.twitter.com/kupone8iYA

Camila Escalante, Ollie Vargas, Ben Norton, Max Blumenthal and Alina Duarte are among the most active journalists covering the important election in Bolivia, while many mainstream media barely mentioned that Bolivian elections were held today. The official results are not expected to be announced soon.

Even mainstream Bolivian media is now admitting that, according to the exit polls, the leftist Movement Toward Socialism (MAS) party will likely win the election in a landslide.

MAS presidential candidate Luis Arce will likely get around 52.4%, according to the exit poll pic.twitter.com/pSpQKkQVSj

Many analysts agree that the right-wing operators in Bolivia won’t concede a defeat so easily no matter the size of the landslide victory. MAS is calling to all their militants and sympathizers to be vigilant and to defend their vote, especially in regards to protecting the evidence of the results.

Almost two hours before the release of exit poll results some MAS militants were detained by repressive forces just in front of MAS headquarters in La Paz. Later it became known -according to reports- that there were MAS representatives in some election poll centers, and they carried with them their copies of the electoral results. Those documents are key to proving the results of the vote in the case of a fraud attempt.