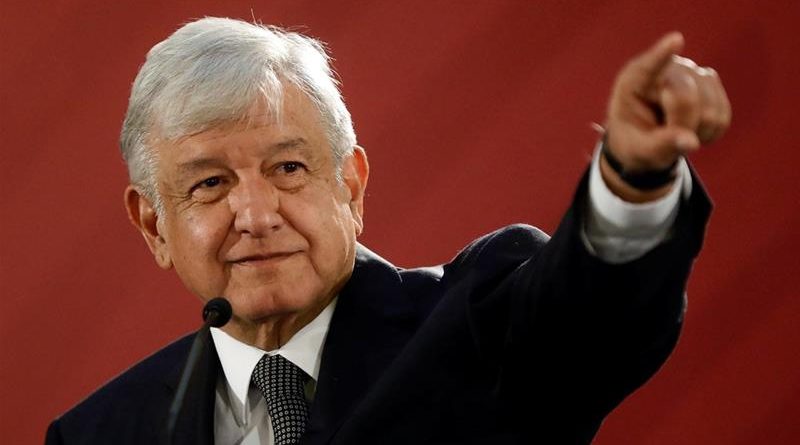 Mexican President Andres Manuel Lopez Obrador said on Friday that Mexico will not respond to US President Donald Trump’s threat of coercive tariffs with desperation but will instead push for dialogue.

Trump threatened on Thursday to impose tariffs starting at five percent and increasing incrementally if Mexico does not convince him that it’s doing more at the border. The first round, Trump said, could go into effect on June 10.

RELATED CONTENT: Trump Slaps Mexico with 5% Tariffs on Everything Until the Immigration Issue is Solved

He said Mexico would respond with “great prudence” to any threats by the United States.

He noted that most migrants passing through Mexico are Central Americans fleeing their countries because they are unable to find work or live safely there.

Lopez Obrador’s administration has stepped up migrant detentions and tightened access to humanitarian visas, slowing the flow of migrant and refugee caravans north and leaving hundreds of people stuck in southern Mexico.

According to government officials, Mexico deported 15,000 migrants in April, up from 9,650 deportations for the same month last year.

Ebrard will also eb tasked with convincing the US government that the move is in neither country’s interest.

He tweeted on Friday that, “the treatment of Mexico is unfair and makes no economic sense for anyone”.

America First is ‘a fallacy’
Lopez Obrador’s comments on Friday came off the back of a letter he sent to Trump late on Thursday in which he called the US president’s policy of America First “a fallacy” and accused him of turning the US into a “ghetto” that stigmatised and mistreated migrants.

Trump, who vowed during his 2016 presidential campaign to build a wall along the US border with Mexico, has made a hardline stance on immigration a cornerstone of his presidency.

However, he has struggled to win enough support from politicians in the Democrat-controlled US House of Representatives, as well as the Republican-controlled Senate, to change immigration policy or to garner funds to build the wall.

Under his “zero-tolerance” policy, the president has implemented several policies or practices that have been blocked by federal judges or are currently being challenged in the courts.

Arrests along the southern border have skyrocketed in recent months, with US border agents making more than 100,000 arrests or denials of entry in March, a 12-year high.

Markets react
Reacting to Thursday’s announcement, US stock index futures tumbled on Friday as investors feared that Trump’s shock threat of tariffs on Mexico could risk pushing the world’s largest economy into a recession.

US automakers were the worst hit by Trump’s announcement as they have long built vehicles in Mexico, taking advantage of the country’s cheaper labour, trade deals and proximity to the US.

Mexico is the US’s third-biggest goods trading partner. The US imported $346.5bn worth of goods from Mexico last year – about half of those were vehicles and machinery. US exports to Mexico amounted to $265bn.

Meanwhile, the US Chamber of Commerce is looking at ways to challenge US tariffs on Mexican goods, including legal options, an official with the organisation said on Friday.

“We have no choice but to pursue every option available to push back,” Bradley told reporters on Friday.

Trump’s threat comes as his administration pushes for passage of the United States-Mexico-Canada Agreement (USMCA), which would update the North American Free Trade Agreement (NAFTA).

The updated deal includes stricter rules on the export of duty-free cars and milk products to the US. It also forces Mexico to strengthen workers’ rights.

The White House said on Friday that US Vice President Mike Pence knew about Trump’s tariff plan before he went to the Canadian capital Ottawa this week to discuss the USMCA.