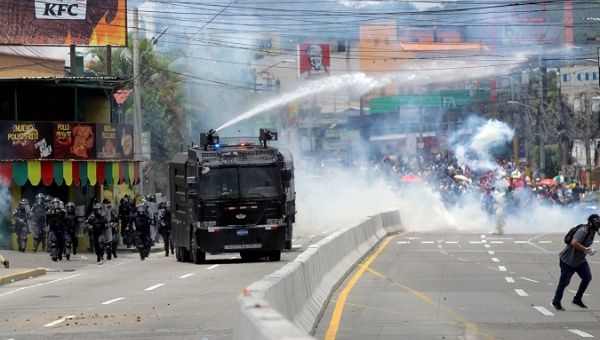 The crowds were forced to disperse, but then came back together in other areas.

Honduran doctors, teachers, and students Thursday demanded the repeal of two executive orders issued by President Juan Orlando Fernandez (JOH) and were repressed by state police forces in cities and towns around the country.

The Platform for the Defense of Education and Health, an organization which brings the two sectors together, called for a national strike Thursday and Friday of this week, along with marches to demand the revocation of two executive orders. An ad for the event called for “Teachers, Nurses, Doctors, Fathers and Mothers, Students, and Regular People to unite for health and education!”

Local media reported several protests forming around the country with the first starting in the capital of Tegucigalpa as early as 6:30 a.m. local time. Protesters blocked roads in Tegucigalpa’s downtown area of La Paz, with local residents taking a planned detour in support of the cause.

#Honduras ??: an estimated 10.000 people marched against the Honduran government and president #JOH today in the capital #Tegucigalpa pic.twitter.com/Na6KnkS8Cq

State police forces responded in the various zones by firing teargas to disperse the crowds. In Tegucigalpa, marchers ran away from the gas but reformed in other areas to continue expressing their dissatisfaction with privatization policies pushed by the Honduras president. In other areas, it was reported by El Heraldo that protesters resisted police with rock throwing.

These kinds of orders are traditionally used in times of war, epidemics, or during “disturbances to peace.”

Both laws create a special commission to transform the sectors and authorize funds for infrastructure. They also include a line saying “and anything else to achieve the efficient implementation of this plan” which has set off alarms bells to activists.

To them, this is the beginning of what will be a wave of mass layoffs and privatization of the systems. JOH has also been trying to push privatization via Employment and Economic Development Zones, which activists have warned, would put parts of the country up for sale.