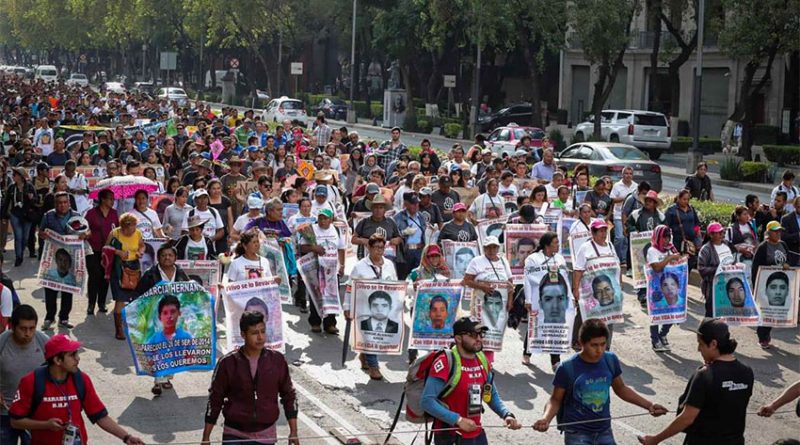 The Mexican Government described the case of the 43 students disappeared in Guerrero State, southwestern Mexico, in 2014 as a “forced disappearance” committed by agents of the State and offered a huge reward leading to the identity of those responsible for the crime. Five years after the massacre, President Andres Manuel Lopez Obrador stated that the case remains a priority of his administration to clarify the events that occurred between the night of September 26 and early morning on September 27, 2014, to find the missing students and if necessary, former Mexican president Enrique Peña Nieto would be summoned to bear testimony about it.

“We’ve got a great advantage. There is no impunity. This is important because it’s very difficult to find the truth when it deals with state crime,” Lopez Obrador said during his usual morning conference, in which the main topic this time was the fifth anniversary of the disappearance of the students. The Mexican President said that the investigation about the disappearance of the students “goes beyond a simple crime. This is an essential issue for justice, for the respect of human rights.”

In turn, the Ministry of Human Rights Secretary, Alejandro Encinas stated that the Mexican Administration is offering a reward of 1.5 million pesos (about $75,000) for anyone who provides “reliable and verifiable” information about the location of the students. A second reward of 10 million pesos (about $ 500,000) will be paid to anyone who gives information leading to the arrest of Alejandro Tenescalco Mejía, who was the shift commander of the Iguala municipal police at the time of the students’ abduction.

Special attorney for the case, Omar Gomez, commented that former federal officials related to the questionable original investigation will be summoned next week, among them ex prosecutor Jesus Murillo Karam.

Going back to the so-called “historical truth,” police officers handed over the 43 students of Ayotzinapa to members of the drug trafficking cartel Guerreros Unidos, who would have incinerated their corpses in a dumping ground after assassinating them. However, the final report presented by an Interdisciplinary Group of Independent Experts stated that it was impossible that the corpses were incinerated in that dumping ground and that part of the official version was based on testimonies provided by tortured prisoners.

What is obvious is that after 5 years there remains more question than answers and the conclusion of this massacre of injustice is far from over.

Meanwhile, Mexico News Dailey reported that parents and supporters of the missing students traveled today to the Chamber of Deputies in Mexico City, where they demanded justice and the return of their sons. They shouted the slogan that has been heard at countless protest marches across Mexico during the past five years, “they were taken alive, we want them back alive.”

Featured image: 5,000 march in Mexico City on the fifth anniversary of the Ayotzinapa massacre.