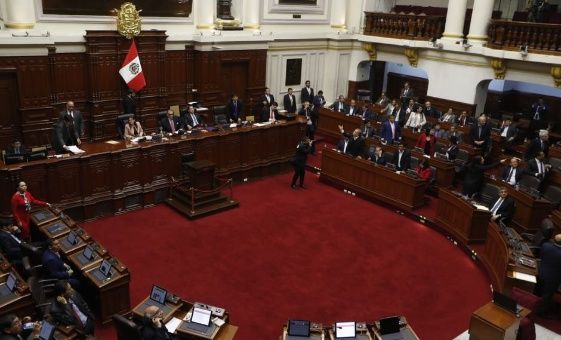 Article 134 of the Constitution of Peru establishes the call for elections to form a new Congress, to be held within four months of the dissolution of the Chamber.

The president of Peru, Martín Vizcarra, announced Monday the “constitutional” dissolution of Congress and called elections to elect a new Parliament, following the rejection of the legislative body to the question of trust raised days before by the government, with which he intended to make changes in the process of selecting candidates for the Constitutional Court (TC).

However, hours after its dissolution was known, Congress moved to suspend Vizcarra from office for 12 months for “temporary disability”, while swearing Vice President Mercedes Aráoz as “acting president” of the country in a new example of the serious open crisis between the Executive branch and Congress.

After these events, those responsible for the Armed Forces and the National Police met with Vizcarra to show “their full support for the constitutional order and the president.”

What is expected after dissolution?
Article 134 of the Constitution of Peru contemplates the power of the president to dissolve the Congress “if he has been censored or denied a show of trust by two Councils of Ministers.”

The last similar event occurred in 1992, when former President Alberto Fujimori alleged obstruction of Parliament in security and economic issues, although his critics said it was to hide several corruption investigations against him and consolidate his power.

After the announcement of Vizcarra, the parliamentarians had to leave the Congress of their own accord or could be evicted by the police, in the case of authorization by the president himself.

However, several parliamentarians have already announced their intention to physically resist any attempt to send them home.

Similarly, the same article establishes the call for elections to form a new Congress, to be held within four months of the dissolution of the Chamber. Once a new Parliament has been elected, it can censor the Council of Ministers or deny the issue of trust after the President of the Council has explained the reasons for the parliamentary suspension.

If the elections are not held during the period indicated, the Constitution determines that “the dissolved Congress meets in its own right, regains its powers, and dismisses the Council of Ministers.”

On the other hand, the same Constitution establishes that the exercise of the Presidency can be vacated by “the permanent moral or physical incapacity (of the president), declared by the Congress”.

However, the decree published in the official newspaper of the country emphasizes that “any act relating to the parliamentary function carried out by the congressmen whose mandate has been revoked is devoid of legal validity and effectiveness.”