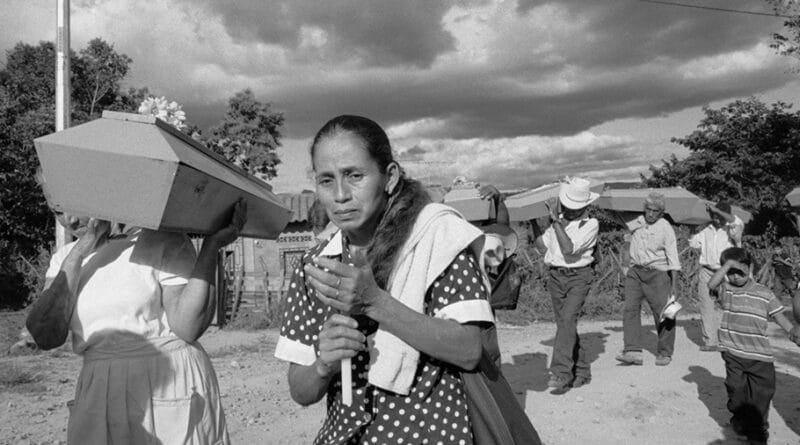 In February 1982, a farmer held the US-backed Salvadoran Army responsible for the worst massacre recorded in Latin America in the second half of the 20th century. Thirty-nine years later, both governments deny the accusations and continue to place obstacles in the way of those seeking justice for the over 1,000 people murdered, mostly children, in the community of El Mozote.

The crime occurred in early December 1981 in the Department of Morazán, while the Salvadoran military, with Washington’s support, was searching among the country’s rural communities for possible members of the Farabundo Martí National Liberation Front (FMLN) guerrilla.

Witnesses and relatives of the victims painfully recall how the military gathered El Mozote’s entire population in the town square in the early morning hours of that December 11. They separated the men and elderly from the women and children and locked them in separate places: the first group was held captive in the church and the second one in a nearby house.

During the whole morning, they interrogated and tortured them. Each man, woman, and child, at the end of the session, was executed.

In 2016, the victims’ resistance against oblivion and impunity won a condemnation by the Inter-American Court of Human Rights, and this is the first case of the war to reach court.

However, successive governments in El Salvador, and now especially that of President Nayib Bukele, have made this a never-ending process, while obstructing access to military data and information that would shed light on the events.

“Army commanders are in the hot seat, but also a government that refuses to look at itself in the mirror,” wrote local newspaper El Faro.

On September 24 this year, on a nationally broadcast presentation, President Nayib Bukele, standing next to five thick document folders, declared that he was about to do something historic.

“We are going to voluntarily declassify the El Mozote-related files because we believe they have no strategic value,” he announced. However, shortly after, he denied it and assured that there were no military archives related to the worst massacre against civilians in the Salvadoran war.

Although 39 years have passed, José Cruz Vigil still seeks justice for the murder of 54 members of his family, including siblings, cousins, uncles, aunts, and nephews, during the massacre. Like him, dozens of relatives of the victims have a glimmer of hope of knowing the truth.

However, the illusion could be erased in one fell swoop. Last week, the ruling party’s bench at the National Assembly approved a set of reforms to the Judicial Career Law, including the retirement of all judges over 60 years old or with over 30 years of service.

One-third of the country’s magistrates would be forced to retire, including Jorge Guzmán, in charge of the El Mozote case.

“The government made an arbitrary and discriminatory determination, which has the sole purpose of leaving unpunished the darkest case of genocide in the history of Latin America,” former Salvadoran Human Rights Ombudsman David Morales explained.

The El Mozote massacre is a sinister box of surprises from which, 40 years later, forms of cruelty continue to emerge. In April of this year, US expert Terry Karl revealed that four napalm bombs provided by Israel were used in the massacre.

“This bomb has a strong, bitter smell, and when pieces of the burning liquid land on you, they dig deep into your flesh and travel throughout your body,” Karl added, and condemned the government’s repeated attempts to protect those who were capable of such a heinous crime.

“There is no honor or pride possible in the face of the murder of children, women, the elderly. It is time for justice,” she said.