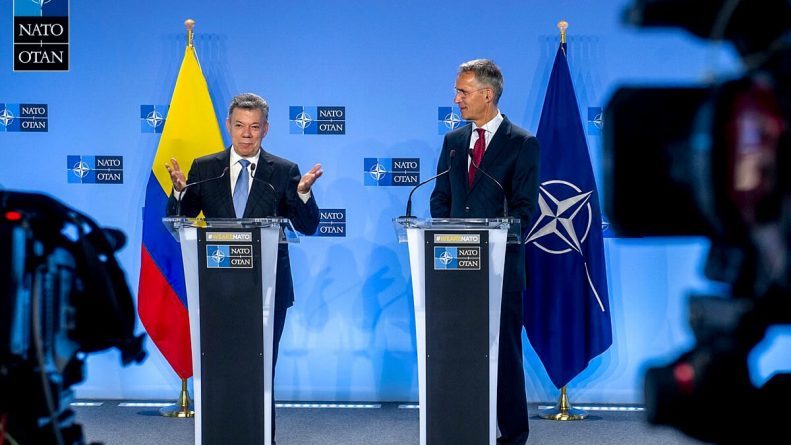 “Vladimir Putin harbors dark dreams of imperialism,” Mike Pompeo told his NATO audience with his usual lack of self-reflection. Pompeo went on to bemoan Russia’s military presence in Venezuela, where 100 military personnel have been stationed in defense of the government of Nicolas Maduro.

NATO turned 70 years old on Thursday and, not unlike another figure in his 70’s who is in the news these days, a heavy dose of “creep” was involved. In the case of the former, however, it’s mission creep.

At the birthday bash, U.S. Secretary of State Mike Pompeo echoed prevailing U.S. military doctrine as defined by the 2018 National Defense Strategy, which characterized competition from other “great powers” as a greater threat to U.S. national security than is terrorism. Pompeo bloviated in Washington to other member states that we’ve entered “a new era of great power competition.”

And in that paradigm, like the paradigm before it, there are new threats, which the U.S. and its allies must combat. Gone are the days of threats of direct military confrontations, however. Instead, Pompeo cautioned of a host of “emerging threats” from countries like Russia, China, and Iran. Pompeo warned:

We must adapt our alliance to confront emerging threats … whether that’s Russian aggression, uncontrolled migration, cyberattacks, threats to energy security, Chinese strategic competition, including technology and 5G, and many other issues.”

It isn’t clear what business NATO — a military alliance — has tackling issues like strong cellphone service in China, but let us continue nonetheless.

“Vladimir Putin harbors dark dreams of imperialism,” Pompeo said with his usual lack of self-reflection. Pompeo went on to bemoan Russia’s military presence in Venezuela, where 100 military personnel have been stationed in defense of the government of Nicolas Maduro, who is facing down a coup attempt backed by the United States. “They need to leave,” Pompeo added. “We [NATO] talked about that… we are doing our best, collectively, to respond.”

Last year, Venezuela’s neighbor Colombia joined NATO as a “global partner,” meaning that it would be “fully accredited” at the NATO headquarters in Brussels, but would not be forced to partake in military action. The move was widely seen as an affront to Venezuelan”sovereignty.

For Venezuela’s part, as NATO meets in Washington, Venezuelan Foreign Minister Jorge Arreaza is taking notes on, and reaffirming his country’s alliance with, another nation in the crosshairs of U.S. imperialism: Syria. On Thursday, he met with Syrian President Bashar Assad, whom he says offered “advice for resistance, victory, and peace… long live Syria!”

NATO and its sinister 70 years

The North Atlantic Treaty Organization was started with 12 signatory nations as Cold War hysteria was reaching a fever pitch in the U.S. The idea was that, should the Soviets invade any of its members (they never did), the other members of NATO would be obliged by treaty to intervene. Today, there are 29 members of this alliance, and they have totally surrounded Russia’s western border with military bases.

According to Soviet President Mikhail Gorbachev, NATO promised the USSR during negotiations on the fall of the Iron Curtain separating East and West Germany until 1991, that NATO would not expand “as much as a thumb’s width further to the East.” That commitment has been the subject of scholarly debate, but documents unearthed in 2009 point to its validity. The German newspaper Der Spiegel reported:

After speaking with many of those involved [in the negotiations] and examining previously classified British and German documents in detail, SPIEGEL has concluded that there was no doubt that the West did everything it could to give the Soviets the impression that NATO membership was out of the question for countries like Poland, Hungary or Czechoslovakia.”

But NATO’s depravity was already well-known. Less than a decade after its birth, in 1957, NATO brought on one-time Nazi general Hans Speidel to serve as Supreme Commander of its ground forces in Central Europe, where he remained until 1963. In this time, he also oversaw the integration of Germany’s army into NATO. In contrast to Speidel’s invasion of France in 1940, Speidel was now charged with France’s protection from the Soviet menace.

For those wondering who the aggressor is, here’s a map showing the proximity to Iran of US military bases, assets and NATO installations. Imagine if there were that many Iranian bases on the border of and within a few hundred miles of the US https://t.co/FzW25fnUwG pic.twitter.com/mURfGC8vLd

Today, NATO’s most notable project remains the destruction of Libya, once the wealthiest nation in Africa, where it backed jihadists with air support in the toppling of the government of Muammar Gaddafi in 2011. Since then, Libya has become a failed state where anarchy reigns and warlords do battle with one another in a bid for power in the vacuum left by NATO. Black Africans are even sold in open-air markets with no government to quash such abuses. This history should give pause to anyone embracing NATO’s ambitions in Latin America and around the globe.