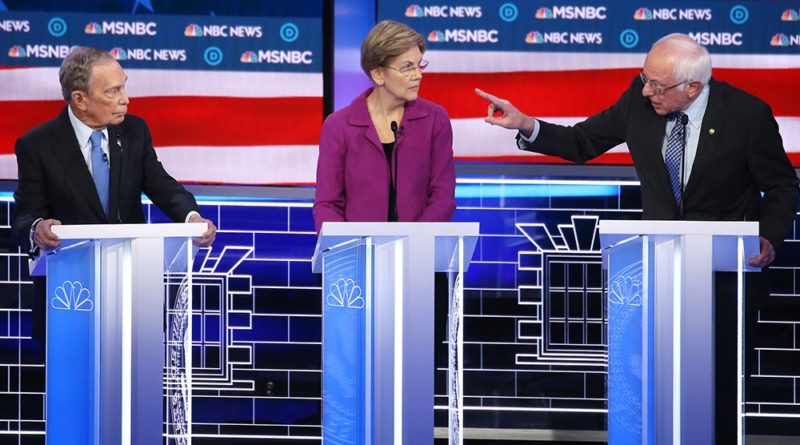 At the debate, all the candidates except Sanders rejected democracy. They said they would not support the wishes of the majority of voters by supporting the winner if no one got a clear majority. They defended the very undemocratic primary process of the undemocratic democratic party. Straight up.

Even if Sanders, the most popular candidate, wins a process stacked against him and his millions of courageous supporters, he can in no way count on any of the people on that stage to do the right thing. Not one.

It is clear, however. Sanders, without interference from the plutocracy of this country, will be the next president of the United States.

MASS ACTION editor John Beacham is very excited. After going to Iowa, he is headed to South Carolina to volunteer for and report on the Bernie campaign from a radical perspective. Please support our on the ground campaign analysis and more by giving an important and urgently needed donation now! Thanks!

Bernie is also the only one in the race that is undoubtedly pro-union, despite the disingenuous shade being thrown at him by a gaggle of opportunists.

RELATED CONTENT: Michael Bloomberg Is Trying To take Down Bernie Sanders, Not Trump

Michael Bloomberg had the worst debate I ever remember seeing. He’s disgusting, obscene and only around because of his money. He – and all the billionaires – need to be shut down.

His pathetic existence on the debate stage exposes the complete bankruptcy of the democratic party elites (Including Obama who has refused to hit out at Bloomberg for running shameful ads targeting black people that make it look like the former president is an endorser).

The Bloomberg campaign in its egregiousness and imperiousness is an absolute gift to Sanders. Here is a billionaire that has made himself a potential poster boy, a target, a punching bag, for all the things that people quite rightly hate right now. There is a reason, after all, that ruling class people from the supreme upper stratum often stay out of the direct political fray.

Sanders should have come out on top more than Warren, but his honorable penchant for attempting to unite when he should conquer keeps resurfacing. Sticking to his progressive guns, however, is how he has gotten where he is.

Elizabeth Warren destroyed Bloomberg, but she also joined the “Bernie Bro” attack on Sanders instead of defending him. (She did defend Klobuchar in an act of solidarity when the moderator essentially tried to paint Klobuchar as a “dumb” woman who doesn’t know anything about the world.)

But the attack on Sanders supporters is meant to shut us up and shut down the Bernie movement. Nothing more. Nothing less. Warren is now solidly a part of that campaign against Sanders. She’s not trustworthy, in my opinion. I also don’t trust Warren’s increasing reliance on identity politics instead of policy.

It really is a mystery to me why Bernie Sanders doesn’t say we can pay for all his proposed social programs and much, much more if we take the money from the war for domination and plunder budget. He obviously doesn’t want to go there. Bad choice.

He also played an anti-Russia card. That will put him on the wrong side of history and strains his future credibility. Conflict with Russia, egged on by the media and the U.S. state apparatus, is potentially cataclysmic. Russia is not marching on the United States. It’s the other way around.

Bloomberg’s presence also helped Joe Biden. Maybe. Biden didn’t come in last in this one. That’s for sure. Say, why didn’t Bloomberg just give his money to Biden?

Beware the demagogic uniter who is not very uniting. Behold, Pete Buttigieg, who is not Trump, Bloomberg or Sanders. He’s the middle. The mysterious, well spoken, middle. Who is he exactly? Shrinking? Things are getting serious and cheater Pete didn’t do as well.

Amy Klobuchar. She thinks it’s okay to be against women’s rights and hopes to win the vote with strong debate performances. She didn’t do so well in Nevada. One hit wonder?