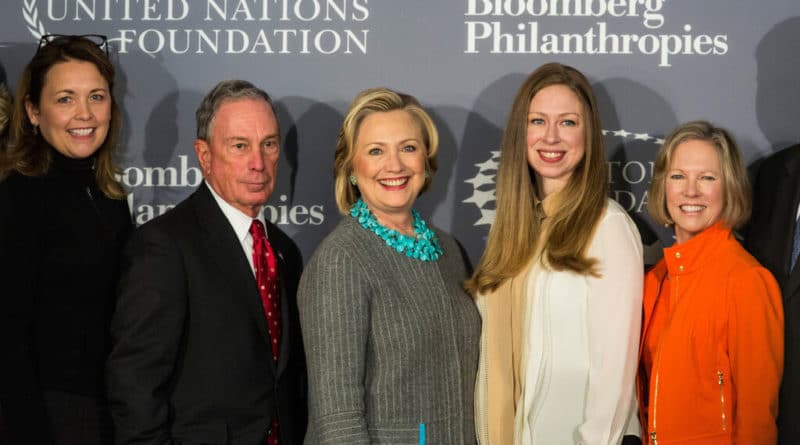 Michael Bloomberg’s campaign has called on the other “moderate” candidates, such as Amy Klobuchar, Joe Biden and Pete Buttigieg, to step down and unite behind him as the only force that can stop Bernie Sanders, who, he warns, will soon have an insurmountable lead in delegates.

Billionaire New York businessman Michael Bloomberg was a late arrival to the 2020 Democratic presidential nomination race, but he has certainly already made an impact. Spending $327 million on TV advertising alone, the former mayor has jumped into second place in some national polls, running on a promise to “unite America, defeat Donald Trump, and start getting big things done.”

Yet the fact that the world’s ninth richest person – someone with his own media empire – can so easily bypass the traditional democratic rules and compete nationally raises serious questions about the state of American politics. MintPress News spoke to political commentator Margaret Kimberley, editor of the Black Agenda Report and author of the new book Prejudential: Black America and the Presidents. She stated that if the 2020 race comes down to a choice between two billionaires – Trump and Bloomberg – “It says that we don’t have a democracy. The facade is off and rich people are unafraid to show they are in control.” But she also cautioned the public from underestimating him, claiming Bloomberg could easily win in November: “Trump lost the popular vote and Bloomberg is unlikely to make the same mistakes that Hillary Clinton did in neglecting a get out the vote effort.”

However, in order to face Trump, he would have to win the Democratic nomination, defeating front runner Bernie Sanders in the process. And in recent days it is becoming increasingly unclear whom Bloomberg sees as his primary enemy: Trump or Sanders. Today his campaign called on the other “moderate” candidates, such as Amy Klobuchar, Joe Biden and Pete Buttigieg, to step down and unite behind him as the only force that can stop Bernie Sanders, who, he warns, will soon have an insurmountable lead in delegates. “I don’t think many people understand the dire circumstances here,” said his campaign manager Kevin Sheekey.

Kimberley was unequivocal in her assessment of the situation and the billionaire’s motives:

He is running to stop Sanders. It isn’t clear to me if he wants to be the nominee or kingmaker for a neoliberal candidate. No one who is acceptable to Bloomberg looks strong and [so] he has chosen to dispense with the middleman and run himself.

Bloomberg has been training his guns on the Vermont senator recently. Earlier this week he released an advertisement video condemning Sanders’ supporters for their supposed intolerance online, showing pictures of Twitter users creatively making fun of him. And today Sheekey condemned Bernie’s “lies” about Bloomberg’s health. Sanders had claimed Bloomberg had suffered a heart attack, but Sheekey responded that it was an “absolute lie,” countering that Bloomberg’s 2000 double coronary stent operation was unrelated (the difference between the two claims might be lost on most observers).

We pride ourselves on being the longest standing democracy in the world.

To me that means one person, one vote.

Mr. Bloomberg has every right to run for president.

I don’t think he has the right to buy this election. pic.twitter.com/QTmxTG0gBu

Sanders himself has been strongly critical of Bloomberg and what he sees as his attempt to “buy this election,” and his history of “humiliating and offensive” racist policies while mayor of New York. The number of controversial Stop and Frisk searches rose from 97,296 to 685,724 under Bloomberg’s watch, the practice having been almost completely repudiated by his successor Bill de Blasio.

RELATED CONTENT: So Many More People Understand the Meaning of Neoliberalism Today, and That’s a Huge Thing

According to the New York Civil Liberties Union, only 12 percent of those stopped were white. Yet Bloomberg complained that far too many whites and not enough black or Latinos were being stopped. “95 percent of your murders, murderers and murder victims, fit one M.O. You can just take the description, Xerox it and pass it out to all the cops. They are male minorities, aged 16 to 25,” he said in a speech.

For Kimberley, Bloomberg’s racially insensitive history made it impossible for him to win over minorities. “The endorsements of ‘leaders’ will not give Bloomberg an in with black voters. They will not countenance a candidate who has already carried out racist policies,” she told MintPress.

It is unlikely that Sanders and Bloomberg are attempting to win over much of the same base, given their strong ideological differences. While Sanders has championed Medicare for All, Bloomberg has called for substantial cuts to healthcare. “We cannot continue to say we’ve got to cut, but we can’t touch Medicare and Medicaid, Social Security, defense. That’s virtually 90 percent of all of our spending,” he said, having also stated that he wants the elderly to “think twice before they use” health services. He has also advocated the defunding of the United States Postal Service.

While today’s nationwide Emerson poll shows that Trump’s approval rating stands at just 4 percent among Sanders supporters, Bloomberg himself was a good friend of the president until recently, only registering as a Democrat in October 2018. “I think he’s a fantastic person. He’s somebody that I know and respect. He’s been a wonderful mayor of this city; he’s done a great job,” Trump said of Bloomberg in 2007, adding that he had the cash it took to be elected.

The former mayor of New York has unquestionably spent big, creating a slick and impressive operation targeting people through both traditional and social media and building up an impressive base of support. But whether his real intention is to become President of the United States or simply stop Sanders doing the same thing remains an open question.