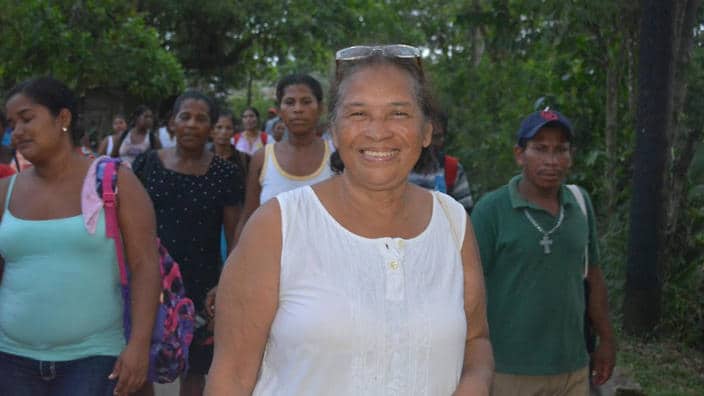 January 30, 2021.- Tortilla con Sal: We came to ask about the problem of so-called invasions of indigenous lands, so perhaps you could tell us a little bit about the reality, perhaps a bit about the historical context and what the reality is now?

Rose Cunningham Kain: I think in today’s world, there are so many ways to distort history. There are so many ways to make up stories to believe that sometimes one is amazed at the stories that people tell about one’s life. I think they are very disrespectful in that sense. Indeed, in the Río Coco communities, we have had about six communities that have had serious difficulties with people who have invaded indigenous lands.

There is another territory called Li Aubra. So they have their own groups of forest rangers that protect the area. Li Lani is made up of 27 communities. They protect their area and they haven’t have any type of conflict to date with non-indigenous people. They haven’t had any invasion of their lands by non-indigenous people. Their methodology has been working. Then we have the other methodology, the other model, which is the Li Aubra model. Li Aubra is the middle part of the river basin. This model has been developed by the indigenous leaders of 18 communities that have initiated a process of talks with non-indigenous peoples and their territorial government.

TcS: Is that what is meant by remediation?

Rose: The first remediation we should talk about is remediation via the social reinsertion of the people. In law, remediation has to do with seeing that the territory of the indigenous peoples does not have any type of conflict due to properties overlapping that might exist there. But in the context of our whole history of struggle for rights as indigenous peoples, we have had historical legal achievements that have not been seen in the overall indigenous movement, at least in Latin America, namely to have a law of indigenous peoples’ property… that empowers us for the use, enjoyment and enjoyment of our resources.

At this point, the Li Aubra model is a model in which the indigenous families have already been building consensus to discuss with non-indigenous people the legality of their presence on indigenous peoples’ lands. And there you have to respect the self-determination of the people and our government does that. It’s a door, a window that has been opened for us to be able to exercise our rights. So, some of the communities in this territory, what they want to do is agree to a lease, and the law permits that.

In other communities, they have said that what we need is to change… For the non-indigenous settlers to go back, to expel them, to remove them. And they continue talking, they continue dialoguing, no consensus is built in a single assembly… in the framework of the indigenous peoples. We always leave for tomorrow another little bit more and we go on talking and going deeper in the effort to reach a consensus. Because that is precisely why it is a consensus… One of our basic practices is to build consensus with sincere dialogue and in good faith.

The other model is the model of the territory of Wangki Twi Tasba Raya, where you just came from, which is pure forest, beautiful, the pine trees, right? That landscape, the people love their landscape, they love their trees, they love their water, their resources. There the model that is being developed is the judicial model. It allows for the apprehension of invaders on indigenous lands, to put them through a legal process where they are brought to trial, and currently they already have seven people who have been convicted for buying or selling indigenous lands. This is another type of process that is being carried out in this other territory.

What is true is that we always call on them to reach an agreement with the indigenous peoples. Either they leave or they come to an agreement with the owners of the land. The last violent activity must have been in about 2013 or 2014. We have not had violent activities in this part of our territory. Here we have seen meetings where people speak their minds. We have documented meetings that have taken place in the mountains between non-indigenous settlers and indigenous settlers where 17 communities, leaders of 17 communities, come together and walk to meet at a certain point.

I think that, like this person, there are many who take advantage of the poverty and conflict of others. That is not and never has been the spirit of the creation of non-governmental organizations. For me, non-governmental organizations should not want to profit from poverty or people’s conflicts. And when I say poverty, it’s not that we are poor. We have been impoverished by the same people who have funded the people who say that we live in conflict. Yes, because we have our wealth. And we have the capacity to make decisions about our wealth because that is what the law allows us to do, and this law is a law that we’re executing from every point of view.

There are some organizations that you can see here in the shelters, in this emergency mobilization to protect us against hurricanes, organizations that are working together with the State, that believe in the State because they have seen how it works. But there are other organizations that have even reached out to people sheltering against these winds and hurricanes to talk to them suggesting “Isn’t it true that the government doesn’t feed you? Isn’t it true that things are very bad?” That kind of harmful, corrupt, underhand manipulation—and those are the same people who then say that we are in conflict.

We have had conflicts. We have had problems. But we have been overcoming all that and trying with the people of the communities to reach our full potential as indigenous peoples. Exercising and living in the exercise of our rights. So, it is a pity that there are Miskitos who found an easy life through those who finance evil. A pity also that they some even say sometimes they are Christians. And that is an issue. Let’s not go into that issue but yes, they go to mass, they take communion and they put on their Sunday best but they are incapable of having compassion for their indigenous brothers and sisters who are trying to get ahead.

It is a big lie and we have not had that kind of conflict for many years. We are building peace. Peace is not just words. Peace is a process. And the social reinsertion after the ’80s, when the counterrevolution was also financed from the north, that peace process that led us to autonomy, we continue to weave it, we continue to build it, and we continue to strengthen it. And today, after 33 years of autonomy, we feel, and I, in particular, feel very proud to see how our community leaders are able to give you an interview and tell you the reality. And they know where the bad is and where the good is.

TcS: Specifically in relation to cattle, can you give us a profile of how cattle are managed here in the municipality of Waspam?

Rose: I remember my father, who is no longer alive, used to name each one of the cows. Our cattle were cattle we kept like a piggy bank, like our own bank, so cattle that perhaps we might slaughter maybe would be for a wake. Or if we had to send our son to school, or at Christmas time. Cattle here have been like pets in other countries. And little by little we have been making a shift to having more cattle. But here there has been no certification process to permit meat exports. That is not true.

The people here supply the local market and, as often as not with some difficulty, we manage to find someone who wants to butcher their cattle for the local market. Of course, in the last few years, we have been encouraging people to improve their cattle stock, so that IPSA can do its work teaching us how to improve our cattle rearing. But we keep animals on a very small scale. So this report saying that settlers are killing us for land to raise cattle on is not true either. That is not true. Not one cattle rancher has died here, not one Miskito was involved in any kind of cattle-related killing. It’s a Disney World story, maybe, a Mickey Mouse story, who knows. But it is not a real story of this municipality Waspam or any of these municipalities where there are indigenous peoples.

Because we love our cattle very much still. I am sure that when you go down the road you will find cattle there walking among the people, and a very harmonious relationship between all of us whether we have cattle or not. In fact, cattle are wandering around, in many cases without being fenced in, without a place to keep them, and occasionally we even joke among ourselves because in some cases our people don’t like to milk our cows. It is our culture. It is a different way of thinking about cattle raising.

TcS: I understand that because of the communal management of cattle, the IPSA system, which is based on farmsteads, on the registration of individual farms, cannot operate because there are no farms as such.

Rose: There aren’t, and cattle roam free… Among the communities we receive here at the mayor’s office, many communities ask us as a priority for wire, barbed wire, to be able to put a wire fence so the community’s cattle cannot enter the area where they are cultivating agriculture for self-consumption. But these the cattle of all the people in the community all mixed together and these are not the farms they are talking about.

So, I think their reports have failed really because first they talked about mining, that mining… here we are not going to deny it, on the river there are people who work in artisanal mining and they pan maybe in banana leaves and sometimes in sieves. And they are careful because there’s been awareness-raising on the issue. But it is not that the case that there’s an extractive industry here that’s contaminating. So, that lie didn’t work and now they’re coming with the lies about cattle and the lies about the settlers. And it’s all untrue, just so that those who like weird stories can believe and fall for those stories and payout money. That’s the whole story.

From Nicaragua or from any part of the world we are always going to find nefarious people who want to invent this type of story in order to benefit themselves. And they do not really work from the cosmogony of our indigenous peoples, respecting our lives, our human rights; respecting our history, our culture, our dignity. They play with the dignity of indigenous peoples, and one feels sorry for those who take seriously the people who want to promote that story.