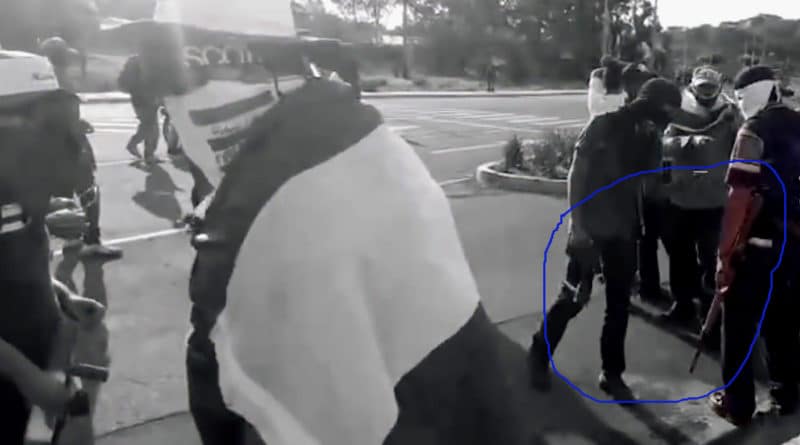 Ever since January 2007, the Western human rights industry has attacked Nicaragua’s Sandinista government for being undemocratic and repressive. For over a decade, Nicaragua’s social and economic development and successive democratic elections repeatedly contradicted that mendacious narrative. Frustrated by Nicaragua’s embarrassing example of undeniable, sovereign, socialist inspired social and economic progress, the US authorities, over several years, prepared, organized and finally openly supported the violent coup attempt of April 2018.

During that coup attempt and ever since it failed, the North American and European human rights industry has falsely accused the Nicaraguan authorities of having brutally repressed peaceful opposition protests with disproportionate lethal violence. In doing so, reports by human rights organizations have systematically ignored numerous very serious crimes and even massacres by Nicaragua’s US supported right wing opposition and their allies. Between April 18th and July 17th 2018, 23 police officers were killed by opposition activists and 400 officers suffered gunshot wounds inflicted by opposition gunmen. Reports by Western human rights organizations have concealed that deliberate lethal opposition violence by systematically suppressing conventional witness testimony, documentary evidence and audiovisual material.

Conversely, no categorical evidence exists to support accusations of systematic human rights violations by Nicaragua’s government. But human rights organizations have lately sought to overcome that absence of evidence by using innovative virtual reality reconstruction. The Argentinian Forensic Anthropology Team (EAAF) published a video on May 30th this year resulting from a collaboration between an Organization of American States body, the Interdisciplinary Group of Independent Experts (GIEI), the EAAF itself and a New York based company called SITU Research, which has previously done virtual reality imaging for Amnesty International, Human Rights Watch, and Ukrainian prosecuting lawyers.

The GIEI, the EAAF and SITU Research have all falsely claimed their video documentary proves that Nicaragua’s police used unprovoked, indiscriminate gunfire to kill unarmed protesters. However, their video shows no footage of police or Sandinista supporters firing on protesters and omits well known video footage by opposition media of opposition protesters carrying and using lethal firearms. It also omits essential context of armed opposition violence related to the events the video covers. Nor does it examine the strong possibility of false flag shootings similar to those that took place at Puente Llaguno in Caracas during the failed coup attempt of April 2002 in Venezuela. The video was funded with support from corporate funders including the Open Society Foundation, notorious for supporting the coup d’etat in Ukraine and other regime change movements elsewhere.

The EAAF-SITU Research video makes quasi-scientific claims attributing lethal gunfire to police or sandinista supporters making questionable use of professional analysis by Knox Associates of the sound of the shots fired . As John Perry notes in his analysis of the video, the Knox report makes clear that opposition activists with firearms were among the protesters. Even the GIEI report acknowledges this. Other readily accessible video footage shows opposition activists carrying automatic rifles and using automatic pistols in the same places and around the same times as the video claims the Nicaraguan police fired their weapons. The EAAF-SITU Research video omits this inconvenient information. Likewise, the video’s imaging material, put together by SITU Research, inaccurately confuses the distances, supplied by Knox Associates ballistics analysis, from which the shots heard in the video came.

This confusion and inaccuracy by SITU Research has antecedents in their video on the shootings in Kiev’s Maidan in Ukraine in 2014. The SITU Research video depicting some of the Maidan shootings was carefully analyzed by Ivan Katchanovski of the University of Ottawa. Katchanovksi concludes“no expert knowledge or familiarity with the Maidan massacre or Ukraine is needed to see blatant misrepresentation of elementary data in that 3D model”. Among much else, he found that SITU Research’s 3D model had moved wound locations to suit the video’s conclusions. Katchanovksi’s analysis also draws on evidence omitted by SITU Research which contradicts their claims, just as SITU and EAAF have deliberately suppressed evidence contradicting the claims of their video on Nicaragua.

With surprising frankness Brad Samuels, founding partner of SITU Research, has publicly stated : “…it’s about not allowing these narratives to become the reason that there’s no accountability… so that you can focus on what you do know and I just I think that that’s at play in all kinds of ways more than it ever has been,… this question of competing narratives, truth claims and facts and that’s really what we’re, this work is about ”.

Samuels here straighforwardly acknowledges that SITU Research suppresses inconvenient competing evidence contradicting the narrative on which they choose to focus. They did this in the Ukraine video and they have now done so too in the EAAF-SITU Research video about the events in Managua on May 30th 2018. The video documentary on Nicaragua by the EAAF and SITU Research dishonestly reinforces the GIEI’s false reports used to justify attacks in the OAS against Nicaragua’s government.

Both the video documentary and the GIEI reports systematically exclude or suppress references to audio visual material available here and here, documentary evidence, witness testimony and press reports here, here, here, here, and here, and an on-the-spot report by a veteran independent journalist, all of which challenge their version of events. Nicaragua’s case is a text-book example of how genuine human rights research has been subverted so as to produce highly biased reports from organizations like the EAAF and SITU Research, supporting the political agenda of neocolonial institutions like the Organization of American States.

In practice, this means they make frequent opportunely scheduled attacks against Western government targets like Syria and Venezuela, and correspondingly less frequent, less critical attacks on, for example, Colombia or Israel. Human rights industry reports are essential reference points for press and media foreign affairs coverage as well as often extremely aggressive messaging on social media. They are also basic inputs into international human rights legal processes, as happened most notoriously in the case of Libya in 2011.

In this way, Western human rights organizations massively extend their market reach and scope, posing falsely as unbiased interlocutors in global human rights institutions. The aura of their messaging influences an enormous number of people who never even read their reports. This messaging aura is a human rights industry product just as important as their actual research. It consolidates their institutional credibility, hugely enhancing their capacity to manipulate news and social media.

RELATED CONTENT Feeding the People in Times of Pandemic: The Food Sovereignty Approach in Nicaragua

This marketing aura is more than mere inauthentic consumer advertising. It facilitates shaping international opinion in favor of the industry’s corporate and government investors’ agenda, reinforcing the power and influence of Western elites. It radically delegitimizes opposition by implicitly setting limits to opinions and arguments that will be tolerated and ones that will not. Human rights organizations and leaders achieve this control not through intellectual rigor and legitimate achievement, but by accumulating mainstream prestige via corporate and governmental acceptance expressed in grants and awards.

That corporate and government investment endows human rights organizations with money, status and goodwill, facilitating two extremely cynical fundamental strategies. Firstly, the human rights industry markets itself dishonestly, but very powerfully, as if it were driven by humanitarian concern rather than ideological bias, effectively discrediting and marginalizing legitimate criticism. Secondly, the human rights industry systematically and dishonestly excludes or suppresses evidence discrediting the pretexts for sadistic North American and European economic and military aggression against countries around the world, from Iran and Syria to Cuba and Venezuela.

The false EAAF and SITU Research video documentary on Nicaragua produced for GIEI group reporting to the OAS is the latest example of this reality. It is a pseudo-innovative, neocolonial reprise of conventional imperialist domination abandoning historical truth to favor a narrative serving Western elites. It bears out Rodolfo Walsh’s famous remark: “History ends up looking like private property whose owners are the very same people who own everything else”. How bitterly ironic that a human rights group from Argentina should collaborate in a project seeking to exonerate US government supported criminals while demonizing their victims.