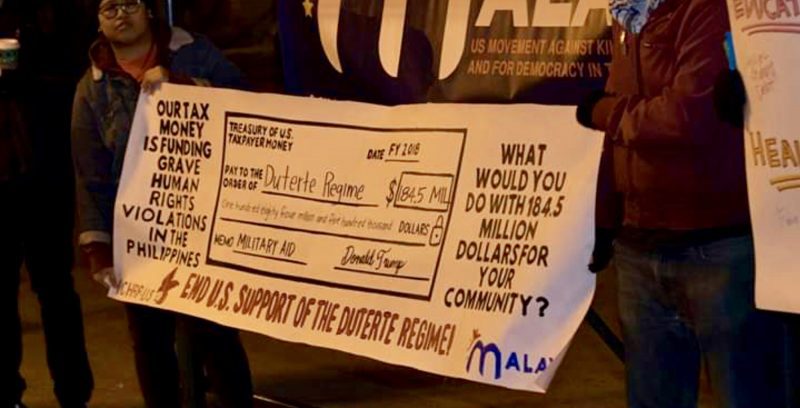 By Chicago Committee for Human Rights in the Phillippines

The Chicago Committee for Human Rights in the Philippines (CCHRP) opposes and condemns, in the strongest possible terms– the recent extension of Martial Law in Mindanao. We are proud to be one of the thousands of human-rights organizations that mobilized on International Human Rights day on December 10th to elevate the demands of the Filipino people for an end to Martial Law, an end to the killings and attacks against human rights defenders, and the release of political prisoners. We join the International Coalition for Human Rights in the Philippines – US (ICHRP), in exposing the U.S.’s hand in Duterte’s militarization, and unite with the call of ending U.S. military aid to the Philippines.

ICHRP-US calls the Martial-Law extension an “extension of Trump-Duterte’s tyranny”:

“Behind Duterte’s militarization is the intelligence, support and interest of the United States, who created and orchestrated Operation Pacific Eagle in the backdrop of the Marawi crisis and the declaration of martial law. Despite the well recorded human rights abuses of the Armed Forces of the Philippines and Philippine National Police, the United States has not wavered in its support of the Philippine military and police, providing the former with 184.5 million dollars in training, tactical guidance, drones and other forms of military equipment. Further, when Jerome Aba, a Moro peace activist from Mindanao, came to the United States at the invitation of United Methodists in April 2018 to speak on the human rights situation in Mindanao, U.S. customs detained, tortured and barred Jerome from entering the United States. In the context of Trump’s repression of migrants, activists and oppressed people in the United States, along with his war-mongering around the world, the extension of Martial Law in Mindanao is also an extension of Trump’s tyranny abroad.”

In conjunction with “memorandum 32”, the further militarization of Negros and Samar, and the worsening climate of impunity; the Martial Law extension and opening towards a nationwide declaration has a dangerous precedent – 9 years of Martial Law under previous Philippine-dictator Ferdinand Marcos.

In the face of growing repression, the Filipino people have mounted a broader and more intensive struggle against Martial Law, militarization, and impunity including the call for the ouster of the Duterte regime. As the U.S. is also complicit in these crimes committed against the Filipino people through Trump’s statements of support and providing equipment and training to the Philippines; it is the responsibility of people who live in the U.S. Filipinos and non-Filipinos alike, to expose and educate others about these crimes. It is time to arouse, organize, and mobilize millions of people in this country to end US support for the Duterte regime.

To contextualize this growing movement: The people of South Africa struggled for decades against the apartheid regime. Their struggle gathered supporters and admirers around the world. By the 1980’s, the question of apartheid had become a broad-social question within the United States and to other western countries who backed the apartheid government. A broad-mass movement forced divestment out of South Africa and instilled condemnation of apartheid from universities, governments, and other institutions. We intend to do the same.

As we take up these necessary tasks of ending US military aid to the Philippines, and standing with the Filipino people in their ongoing struggle for national sovereignty and genuine democracy, we’re inspired by the history of anti-imperialist and international solidarity movements, that reimagine a more just world order.

End U.S. Aid to the Philippine Military and Police!

Chicago Committee for Human Rights in the Philippines.