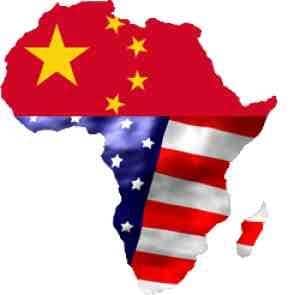 This week the Trump administration unveiled a “new” strategy for Africa, designed to counter China’s growing influence on that continent.

John Bolton, Trump’s national security adviser, said the US would spend more money on and pay greater attention to African countries, making it clear that the decision was motivated by concerns about the American lag in its global economic competition with China.

In his speech to the Heritage Foundation, Bolton said the greatest threat in Africa came not from poverty or Islamist extremism but from China (and to a lesser extent Russia). Bolton announced a new initiative– “Prosper Africa” — to promote American investment in African countries.

Bolton’s speech was short on details—no dollar sums were mentioned (nor the fact that Trump slashed the foreign aid budget to pay for tax cuts for the rich), and no specifics were provided about the kinds of projects the US would be undertaking.

Bolton merely said the US would be promoting alternatives to the large, state-directed public works projects undertaken by the Chinese.

Bolton’s speech was largely window dressing, intended primarily to broadcast Trump’s “America First” foreign-policy orientation. It was lambasted by those with expertise in the African field:

“There is no way that America can really compete with China,” said Robert Schrire, a political science professor at the University of Cape Town, who dismissed Bolton’s speech as “rhetorical swiping” at China and Russia. “No real resources are going to flow” and those that do will probably be strategic, he said, targeted at places where the U.S. has a military presence or terrorism concerns.

“Bolton talks as if the U.S. strides across the world in a way that the U.S. no longer does, for multiple reasons, and not just Donald Trump, because China is in the ascendancy,” said John Stremlau, a professor of international relations at the University of Witwatersrand in Johannesburg. “What’s really important is hunger and unemployment and the population boom and demographic implications and climate change and things like that which he doesn’t even touch on.”

After all, if this is going to be the “new” strategy, then what was the old one?

In truth, there was no real strategy in the past, unless pumping aid-dollars into the coffers of often corrupt African governments counted as a policy. Strings were of course attached to such aid, but these were overlooked or else easily “fulfilled” once the aid was delivered.

By contrast, as a Liberian academic I met in the US a couple of years ago described to me, the Chinese have a different approach.

The Chinese make targetted loans, asking African countries what they need (nearly always in the way of infrastructure but not limited to that), then provide the loans, and undertake the projects themselves. The opportunities for an African kleptocrat to divert money into a Swiss bank account are thus reduced, and the chances of the project succeeding are enhanced because of direct Chinese supervision.

China’s aim here is not entirely altruistic, of course, and the slogans it uses (“aid that is mutually beneficial” and “soft power”) give an indication of a self-interest purportedly compatible with the interests of other parties.

Researchers from Johns Hopkins University conducted a detailed analysis of Chinese loans to African countries from 2000 to 2017 and concluded:

“From 2000 to 2017, the Chinese government, banks and contractors extended US $143 billion in loans to African governments and their state-owned enterprises (SOEs).”

Angola is the top recipient of Chinese loans, with $42.8 billion disbursed over 17 years.

Chinese loan finance is varied. Some government loans qualify as “official development aid.” But other Chinese loans are export credits, suppliers’ credits, or commercial, not concessional in nature. China is not Africa’s largest “donor”. That honor still belongs to the United States”.

Bolton displayed his ignorance when he said that China’s focus was on large, state-directed public works projects. However, according to a Brookings Institution report:

“A 2017 McKinsey study reports that there are more than 10,000 Chinese-owned firms operating in Africa today, about a third of whom are involved in manufacturing. Notably, French academic Thierry Pairault points out that the overwhelming majority of these enterprises are small and micro businesses. McKinsey also reports that Chinese investment in Africa increasingly contributes to job creation, skills development, and the transfer of new technologies, practices more generally associated with Western business norms”.

But China’s role on the African continent has of course been defined largely by infrastructural development– according to AidData China has been involved in more than 3,000, largely critical, infrastructure projects.

These projects range from bridge, road, airport, and harbour construction; to railways and electricity grids, and technology transfer.

Chinese projects are powering Africa, and Chinese firms are creating jobs in Africa. China is boosting Africa’s economic transformation, and Hillary Clinton was egregiously mistaken when she warned of a “new colonialism” in Africa while she was US Secretary of State. Clinton did not mention China in her remarks, but their import was clear.

In a conference last month on Chinese Marxism at the University of Newcastle, Australia, I referred to Clinton’s remark in a conversation with a Chinese academic. Aware that I am a Brit, he said “Your country colonized large parts of Africa for centuries, and when you left, they still had no proper roads and electricity or safe drinking water. China is providing these—is this “colonialism”?”.