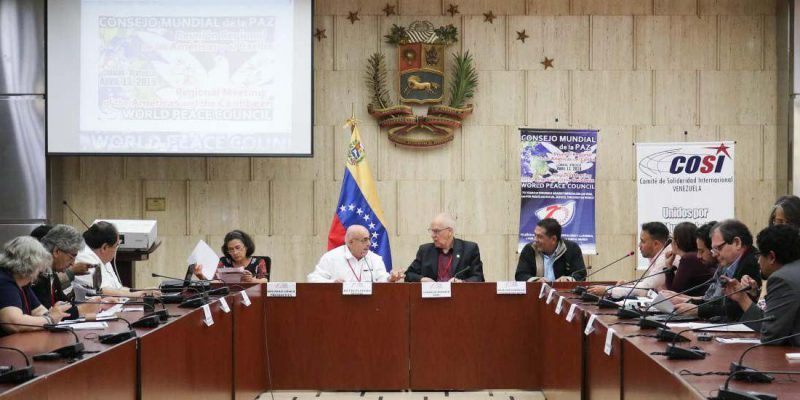 11/Abr/2019.- The organizations belonging to the World Peace Council (WPC) for the Americas and the Caribbean met this Thursday in the Bolivarian Republic of Venezuela, in an extraordinary session that allowed the presentation of a report of the current situation and the struggle in the continent in the context of aggression by the US government and its European allies.

This important international meeting, held in the framework of the 70th anniversary of the CMP and the II International Mission of Solidarity with the Bolivarian Revolution, gathered in Caracas, a group of delegates from Brazil, Greece, Nepal, Cuba, Argentina, Barbados, Mexico, the United States, Canada, Colombia and Venezuela, including the President of the Council, Socorro Gómes.

In his installation speech, the Deputy Minister of International Communication of the Ministry of Popular Power for Foreign Affairs, William Castillo, outlined the background of the current situation in Venezuela that had a turning point on January 23 with the self-proclamation of the opposition deputy Juan Guaidó, supported by the United States and its allies.

“Nothing that has been done since January 23 is legal, it has no legal basis,” he said.

Deputy Minister Castillo also denounced the political, diplomatic, economic and financial siege imposed by Washington on Caracas, which has intensified during the administration of Donald Trump but whose origins go back to the decree issued in 2015 by former President Barack Obama, declaring the The Bolivarian Republic of Venezuela as an “unusual and extraordinary threat” to the internal security of its country.

He warned, in this context, that the US government not only seeks to propitiate a change of government in Venezuela and to “annihilate” the revolutionary forces politically, but also to seize the natural resources of the oil rich country.

On the contrary, he highlighted the strategy of the Venezuelan Executive aimed at preserving the peace of the Republic, stating that “the coup d’état that began on January 23 is being defeated.”

During the day, the delegates of the continent’s organizations attached to the CMP expressed their solidarity with the Bolivarian Republic of Venezuela and its President Nicolás Maduro, before the hostile policy of the US administration.

Ernesto Pereyra, of the Movement for Peace, Sovereignty and Solidarity among the Peoples of Argentina, proposed the creation of a campaign of solidarity with Venezuela that transcends communication barriers.

Jussara Cony, from the Brazilian Center for Solidarity and Struggle for Peace, expressed her solidarity with the Bolivarian Republic and President Maduro, who “face the greatest aggression in Latin America.” In the same way, she pronounced her support to the self-determination and to the right to peace of the Venezuelan people.

The Brazilian activist argued that the interests of the United States in Venezuela are to control the greatest oil wealth of the planet.

A similar message was expressed by Bahman Azad, from the United States Peace Council, who has managed to articulate in his country a coalition of support for Venezuela.

At the end of the deliberations, the delegates of the organizations attached to the CMP approved a declaration that, among other issues, requires “the cessation of the aggressions against the Venezuelan people, which have been expressed politically, economically, diplomatically and even militarily”. Likewise, they denounced the set of unilateral coercive measures imposed by the United States and the European Union.

The attendees also reiterated the full validity of the proclamation of Latin America and the Caribbean as a Zone of Peace, approved at the II Summit of Heads of State and Government of the Community of Latin American and Caribbean States (Celac), held in January of 2014 in Havana, Cuba.