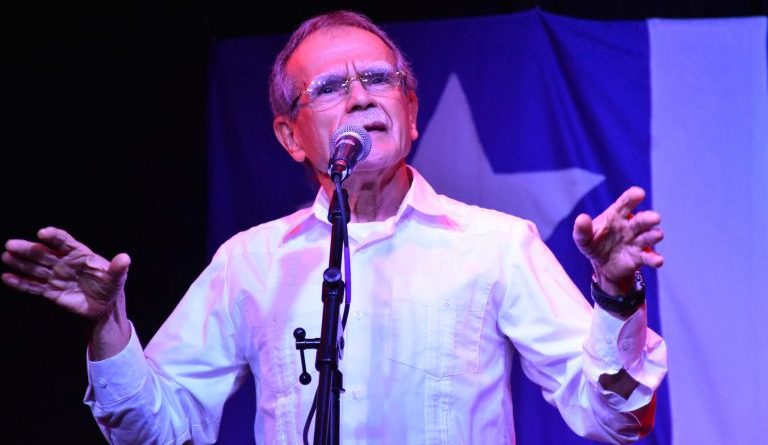 At a time when what is coming from the US government is all about hatred and misery, hearing Oscar Lopez Rivera, a man who talks about love and solidarity despite spending more than 30 years in US prison for fighting for the right of self-determination and sovereignty for Puerto Rico and its people, was refreshing.

A full house at La Pena Cultural Center in Berkeley, California warmly welcomed Oscar this evening. This event was part of a national US tour whose goal is to support his work in Puerto Rico after Hurricanes Irma and Maria and more recently a series of devastating earthquakes have made the colonial living conditions even harder for most Puerto Ricans on the island.

Since his release in 2017, Oscar founded the Oscar López Rivera Foundation, Libertá, as part of the effort to strengthen grassroots community organizing, demanding the auditing and cancelation of the island’s debt and advocating for Puerto Rico’s sovereignty.

In his talk he stressed that it was his passion and love for Puerto Rico that gave him hope through all those years of his imprisonment. Out of that he took away the belief that nothing is impossible. “I don’t do things for me; I am a citizen of this planet. Love is what moves me in the direction to do whatever we need to help our people. The history of Puerto Rico is full of examples of this type of patriotism.”

In addition Oscar asked the audience to support the struggle to free political prisoners. He talked briefly about how the Violeta Parra song “Gracias a la Vida” became his every day anthem, something significant for La Pena Cultural Center, which is full of the history of Chilean refugees who started it in the seventies after fleeing the Pinochet dictatorship.

Then he talked about Cuba and what it means for him and for humanity. He highlighted the fact that for four years he shared the same cell with Fernando Gonzalez Llort, one of the Cuban 5 political prisoners in the US for defending their country against terrorism. He described that time as, “the best years for me”.

Someone from the audience asked Oscar a question about what socialism means to him and he responded that, “Socialism is an alternative that can move us forward,” and he used Cuba and its international solidarity as an example. He talked about the role of the medical brigades that Cuba sends all over the world to help where ever there is a need. Importantly he also talked about the decisive role that Cuba played in the struggle against apartheid in Southern Africa, “Without Cuba’s assistance Apartheid could still exist there and without the help of Cuba, there would have been no President Mandela.” All that coming from a country in a constant struggle against a brutal US blockade, all the while showing the possibilities of a social system based on humane priorities.

Oscar made the connection between Haiti and Puerto Rico and all they have in common, and the importance of the Puerto Rican diaspora and how much they are helping their compatriots on the island. But he also brought up the terrible conditions that people in the US confront today, like the lack of health care and homelessness. “We came to talk to people about the thousands on the island who are living without homes and under tarps and in tents and then we found that right here in Berkeley and Oakland where we see there are hundreds of people visibly in the same conditions. We have to shame the US government with all their money and power for what they do to their own citizens and others around the world.”

It is hard to imagine what 36 years of unjust imprisonment can do to an individual but seeing and listening to Oscar Lopez Rivera tonight we can say that the spirit of those who continue to fight for justice can never be broken.