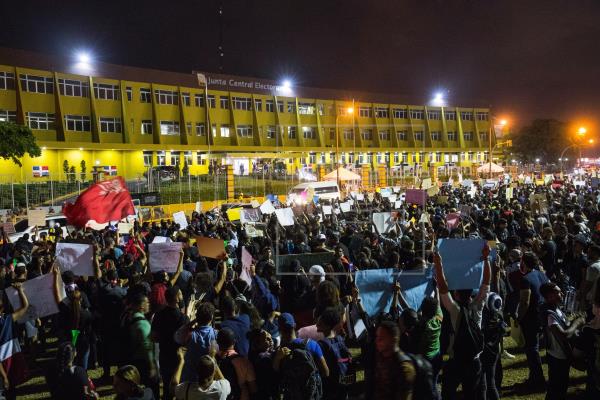 Last Monday, February 17, the Dominican people took to the streets to demand the resignation of the members of the Central Electoral Board (JCE), after the suspension of municipal elections that had to be held on Sunday, due to “a technical failure” of the automated system.

According to international media, four hours after the electoral process began, it was decided to suspend voting due to a technical failure that would have prevented the lists of some political organizations from appearing on the voting machines. Accordingly, the JCE rescheduled the contest for the coming March 15.

This decision was protested even by former president Leonel Fernández, who wrote on his Twitter account: “On February 16 we called for a national dialogue between the different political and social sectors of the Dominican Republic. This dialogue seeks to overcome the crisis unleashed following the failed attempt of fraud perpetrated in the past municipal elections.”

The action of the JCE generated unrest in the population, which almost immediately turned out peacefully to the streets of Santo Domingo – where about 60 percent of the entire population votes – to denounce a fraudulent electoral maneuver by the government of President Danilo Medina, on which accusations of corruption weigh.

RELATED CONTENT: IACHR Delegation’s Show Could Not Go On

The response of the Medina Administration was to launch tear gas and shots at protesters, according to information collected by users of social networks, despite the fact that at all times, the protesters did not attacj facilities or the police.

Given this fact, neither the US government, nor the Electoral Observation Mission of the Organization of American States (OAS), nor the Inter-American Commission on Human Rights or organizations such as Human Right Watch has raised their voices against the repression exerted by the government against the protesters, even though they insisted on denouncing alleged acts of repression and electoral irregularities in other states such as Venezuela.

According to reports appearing in different Dominican media, these municipal elections represent a first test of strength between the ruling Democratic Liberation Party (PLD) and its main opponent, the Modern Revolutionary Party (PRM), which also controls the mayor’s office of Santo Domingo, before the legislative and presidential elections, scheduled for the month of May.