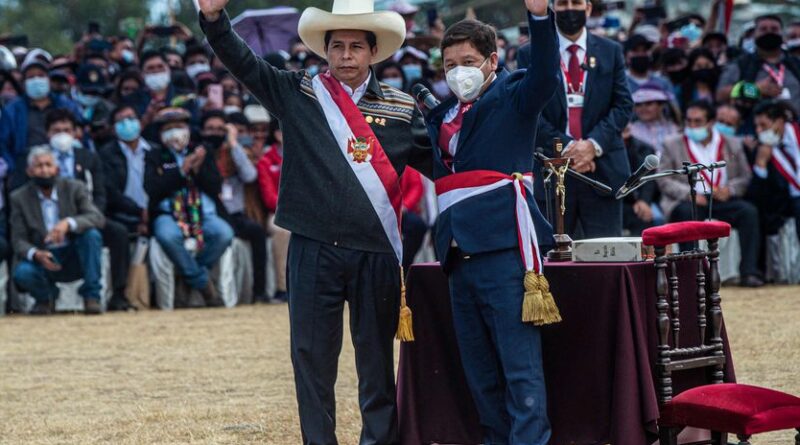 Security has been reinforced at the residence of the Peruvian President Pedro Castillo, after a group of  violent protesters attempted to reach the house on Saturday, July 31. In addition, there are already the early signs of a growing political siege against the new president who assumed charge only days ago on July 28.

The Peruvian Chief of Police, General César Cervantes, assured that the president’s safety is guaranteed, after a group of approximately 300 right-wing protesters reached up to a block away from the president’s official residence.

The security restrictions, which already prevented entry at the ends of the street, were extended to a wider perimeter faced with possible new attacks by groups of radical followers of the thrice-defeated former presidential candidate Keiko Fujimori.

Meanwhile, the opposition effectively ended the traditional three-month “honeymoon” that is granted to a new president, to allow them to settle into power and adopt their first decisions and resolutions. Instead of three months, only three days after Castillo took oath the opposition is already discussing, along with the country’s hegemonic media, how to oust him.

The reason being invoked is the appointment of Guido Bellido as prime minister. The appointment of Bellido, a congressman of the ruling Peru Libre party, is being questioned by Castillo’s opponents because the parliamentarian is under investigation for allegedly being a “terrorism apologist,” as he had once commented that those who were members of armed groups in the past were not terrorists but Peruvians who had made a mistake.

Bellido assured that he “categorically rejects all forms of violence and terrorism in all its extremes” and added that “together we will overcome racism, classism, machismo ,and homophobia,” referring to controversial comments about Peruvian armed groups that he made years ago on social media.

Despite this, the challengers insisted that he should be removed from the government for being close to the General Secretary of Peru Libre, Vladimir Cerrón, who faces charges of alleged corruption and, according to the opposition, has extremist positions and should not have contact with the Executive.

Congresswoman Adriana Tudela, from one of the neoliberal groups that constitute the majority in the parliament, criticized the composition of the president’s ministerial cabinet, which consists mostly of young people and provincial leaders associated with social movements.

Adriana Tudela was born in Madrid and is the daughter of Francisco Tudela, who served as foreign affairs minister during the regime of the disgraced Alberto Fujimori, father of Keiko Fujimori. Tudela is a member of the Peruvian right-wing elite and comes from a family of politicians and career diplomats, being the granddaughter of Ambassador Felipe Tudela y Barreda and great-granddaughter of diplomats Francisco Tudela y Varela and Casper van Breugel Douglas.

The parliamentarian said that a presidential ouster is a “possibility” and proposed “devising an intelligent strategy to win this battle against communism” and join the centrist groups Morado and Somos Peru “to recover our democracy.”

The neoliberal and far-right forces do not add up to the two-thirds of the votes necessary to apply the “vacancy due to moral incapacity,” a requirement for impeachment of a president, but they would have that majority if they could get the two groups mentioned on their side.

RELATED CONTENT: ‘For a Country Without Corruption and With a New Constitution’: Pedro Castillo Sworn in as the President of Peru (US Pushing its Destabilizing Agenda in Latin America)

Political analyst and graphic humorist Carlos Tovar commented in this regard that “the coup leader Adriana Tudela wants to stretch the moral incapacity scope towards ‘I don’t like your cabinet, so you’re morally incapable.'”

On the other hand, the parliamentary caucus of Peru Libre, the largest single block in the Legislature, met President Castillo on Sunday, and while leaving the meeting reported that they will seek dialogue with the other parties in the parliament.

The projected talks will seek consensus so that the full legislature and the president gives its support to the ministerial cabinet.

In this context, the defeated candidate Keiko Fujimori released a belligerent audio message in which she repeated her threat of not accepting the legitimacy of the new president, citing anti-communist arguments. Fujimori is awaiting judicial rulings on corruption charges and many analysts are of the opinion that she is seeking additional time to delay court decision on her case.

She affirmed that “regardless of our political differences, we must begin to act with the sole purpose of saving our democracy and rescuing the country from a radical and totalitarian government,” and added that “there is no negotiation with terrorism.”