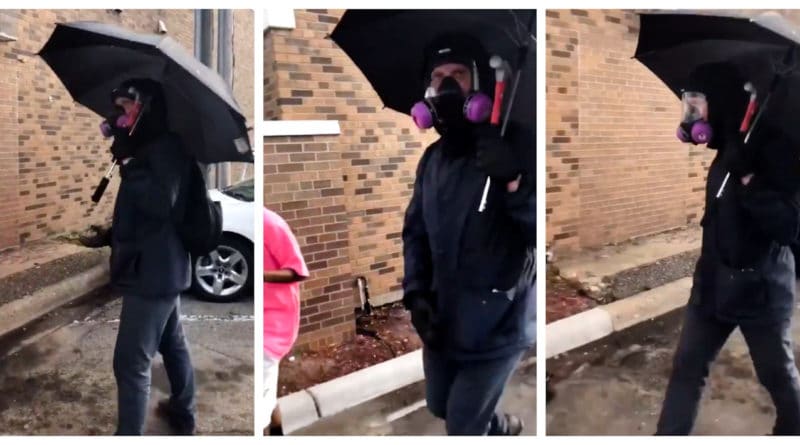 Regardless of the truth behind who started the fires and the looting, the rage felt by the people of Minneapolis and elsewhere is the result of a deep and profound problem in this country that cannot go on.

The mysterious “umbrella man” caught on video vandalizing an Autozone store in Minneapolis is alleged in social media postings to be officer Jacob Pederson of the Minneapolis Police Department. An official statement issued by the Twin Cities’ police department denied that the person in the video was the individual claimed, stating that officer Pederson was “working hard, serving his community, keeping people and property safe, and protecting the right to peacefully assemble.”

convince me this guy that started shit at autozone windows is not a COP pic.twitter.com/zmirgedQkD

The allegations come from still unconfirmed screenshots of text messages ascribed to his ex-wife in which Jacob “Jake” Pederson is purportedly identified as the same man who smashed the windows of the national auto parts chain store and who has since been spotted in at least two other videos.

Update: It has been revealed that Officer Jacob Pederson of the St.Paul Police Department was the culprit responsible for kick starting the riot in South Minneapolis. He was captured on camera and identified by his Ex-wife.

A different video taken soon after the original shows him walking side by side with the same African American man who had appeared to confront him in the first video. The second video, however, displays a starkly different demeanor from the man with the pizza box, which also appears to be empty.

In a third video taken at night, the same dark-dressed man was spotted once again; this time apparently setting fires in another location.

An umbrella of confusion

As events unfold in Minneapolis after the coldblooded murder of yet another innocent black man at the hands of police, the information wars have erupted and propagated online just as quickly. Multiple narratives are being brought forth and widely disseminated resulting in a fog of confusion for both the people consuming the news, as well as those directly engaged in the mass protests.

The fact that we have a clear precedent for infiltration of law enforcement with the intent to sabotage and incriminate marginalized groups who organize to perform acts of civil disobedience, makes the accusations being levied against a member of the Minneapolis Police Department entirely credible. Just four years ago, during the NoDAPL protests at Standing Rock, saboteurs employed by a security firm hired to protect the oil interests were discovered.

So it is perfectly plausible that such tactics are once again being used in Minneapolis right now. But, it is also important to take other factors into consideration, given the circumstances and the current state of social media and the already advanced efforts to curtail the free exchange of information.

President Trump’s recent executive order, spurred by a manufactured battle with his favorite social media platform, Twitter, should give us some pause and make us take a closer look at the stories that are coming out about the situation in Minnesota and other parts of the country as a result of the continued behavior of police departments across the nation.

A few red flags stand out about the Jacob Pederson narrative that should be taken into account. The first is how conspicuous the man’s presence is; not only how he is dressed – which seems over-the-top – but also by how he draws even more attention to himself by wielding the large, open umbrella we see him using to cover his face in two of the videos.

Second, and perhaps more importantly, is his peculiar mask. He is wearing a $200-dollar full face respirator mask made by prominent defense contractor Honeywell. The North 54001 mask on his face isn’t exactly available at Home Depot or other vendors that are readily accessible to the general public; much less to the mass of improvised demonstrators on the streets of Minneapolis or St. Paul. The specific filters on the mask seem to not be the stock version that comes with the respirator and are also not cheap. A reference to the mask is also made in the supposed text messages by the “ex-wife,” who claims the mask is actually hers and alternate claims that the mask is police-issue have also spread on social media sites like Reddit. This detail is significant in terms of informational warfare because the mask itself looks like it would be a ‘big clue’ about the real identity of the enigmatic figure who is now the center of a whodunit saga, and has the ultimate effect of diverting attention from the single most important story.

End of the police state

Regardless of who “started” the fires and the looting, the core of the matter does not change. The very real rage felt by the people of Minneapolis and elsewhere is the result of a deep and profound problem in this country, which far from receding into history, remains scandalously present and appears to be gaining momentum thanks to – among other things – the provocateur-in-chief Tweeting from the oval office to a polarized nation increasingly in the clutches of a metastasizing surveillance state.

In the first video, after the man with the pizza box seems to confront Umbrella Man by asking if he was “a cop,” some have speculated from his largely unintelligible response that he says: “It doesn’t matter.” If there’s any truth to this story at all, this could very well be it.

Featured image: A series of screenshot from video showing the mysterious “umbrella man”after he was confronted by protesters in Minneapolis