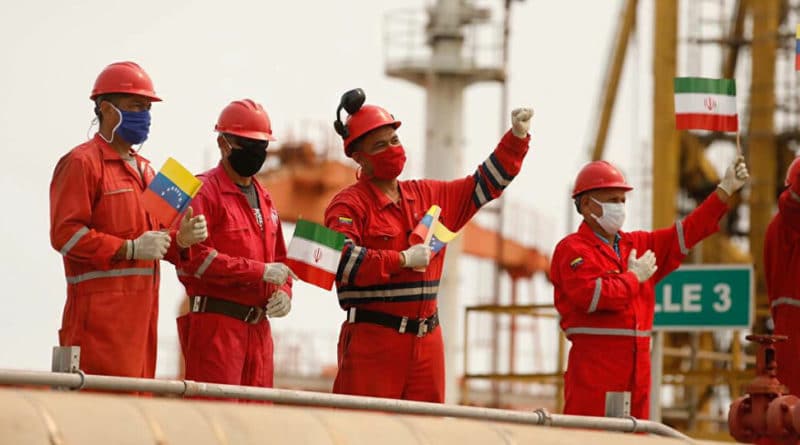 Iran has been supplying petroleum products to Venezuela as the Latin American country is facing a severe shortage of gasoline and is struggling to procure it abroad because of US sanctions.

The United States has forced two ships carrying Iranian energy supplies to Venezuela to cancel their deliveries under the threat of sanctions, The Wall Street Journal and Fox News report.

It is understood that the two vessels were the Bering and the Bella. Both are registered in Liberia and owned by Greek shippers. They were supposed to arrive in Venezuela after a five-tanker flotilla that was scrambled to supply fuel, additives and spare parts for Venezuelan refineries. The first four Iranian tankers from that flotilla have already safely docked in Venezuela, and the fifth is still en route.

As first reported by The WSJ, the Bering and the Bella were forced to turn back after US officials contacted the Liberian government and threatened with sanctions should they proceed with the delivery. They also have been in direct communication with the ships and threatened their Greek owners with sanctions and legal action, according to the report.

Liberia is said to have immediately revoked the ships’ accreditation; otherwise, they would lose access to international banking and maritime insurance. The ships were reportedly heading south off the coast of Senegal near Liberia on Thursday.

The Trump administration confirmed the move to Fox News. “We will continue to use the full weight of United States’ economic and diplomatic power to press for the restoration of Venezuelan democracy,” a State Department spokesperson told the network.

“We will continue to use the full weight of United States’ economic and diplomatic power to press for the restoration of Venezuelan democrac.”

There has been no comment from Iran or Venezuela so far.

The Bolivarian Republic, which sits on the world’s biggest crude reserves, has been experiencing acute gasoline shortages and has become increasingly reliant on energy imports. The national refinery network has been operating at a roughly 10-percent capacity because of US sanctions and underinvestment.

The country’s state oil company, PDVSA, had previously swapped crude exports for fuel, but Washington virtually shut down that lifeline by imposing sanctions on Russia’s Rosneft and pressuring PDVSA’s major trade partners in India, Italy and Spain to stop exports.

Venezuelan authorities this month thwarted an armed coastal incursion of dozens of armed men, which was orchestrated by a private US security company.

Two American mercenaries, who were detained during that raid, testified that their mission was to kidnap Maduro. One of them said that the contract for the operation had been signed by Guaido, a charge the Venezuelan opposition leader denied. The Trump administration, which placed a $15-million bounty for Maduro’s capture on narcoterrorism charges, has likewise denied involvement in the attempted coup.