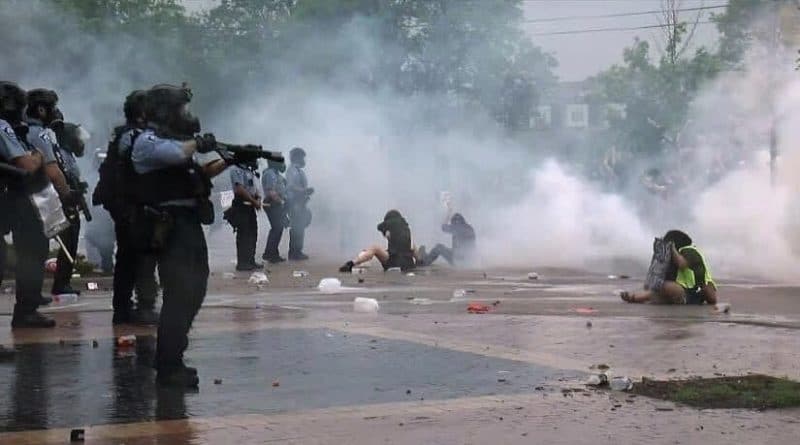 Caracas, May 27, 2020 (OrinocoTribune.com).- Yesterday afternoon the city of Minneapolis in the north of the US Midwest was shocked by the announcement of the death of George Floyd (46) an Afro-American detained by Minneapolis Police officers and sent to the hospital unresponsive due to the reckless and racist attitude of the policemen involved who put him in a neck restraint until he lost consciousness. Floyd was pronounced dead at the hospital.

Officers Derek Chauvin, Tou Thao and two others unidentified were caught on video during the whole procedure. Officer Chauvin put his whole weight on George Floyd’s neck, the two unidentified officers did something similar on the chest of the victim while Thao stood nearby.

George Floyd died at the hands of these officers!

Do I lump all officers together over this? NO.

But these imbeciles need to be held accountable and charged!#GeorgeFloyd pic.twitter.com/BaDRN283LQ

What’s their name and badge numbers? 2 of the 4 are Derek Chauvin #1087⁣ and Tou Thao #7162⁣ they should be arrested and charged! # #alwaysfilmthepolice #GeorgeFloyd pic.twitter.com/RQUy84QotV

Minneapolis Mayor Jacob Frey announced the firings on Twitter, saying “This is the right call.” Police had said the man matched the description of a suspect in a forgery case at a grocery store, and that he resisted arrest.

But the long tradition in the United States of systematic killings of people of color without proper exercise of justice mixed with systemic racism ignited protests that reached the 3rd precinct of the Minneapolis police department.

Things are getting ugly in #Minneapolis..after the killing of #GeorgeFloyd …is incredible the patience of US citizens on the systematic extermination of people of color by police believing it is above the law…. https://t.co/PeNSdtPd9y

And once more people from all over the world witnessed how the US, which calls itself the beacon of democracy and human rights, deployed an arsenal of weapons against protesters demanding justice, not willing to accept the dismissal of police officers as the solution for this new incident that is added to several racist episodes recorded in the US in recent days.

"Nice": US democracy in action 🤢🤬 Lets wait for @Almagro_OEA2015 … he will impose sanctions on the US for sure https://t.co/wgDPxT4s7b

“It is inconceivable that in the US, that calls itself the home of democracy and justice, there is a pattern of systematic killing of people of color and in most cases the only reprimand of the police officers involved is a suspension or a dismissal. There are very rare exceptions of police officers being put behind bars for the crimes they commit,” a political analyst told the Orinoco Tribune.

A better look at the crowd size of the Minneapolis march for #GeorgeFloyd pic.twitter.com/u0pg0hf4bD

Thousands in #Minneapolis are protesting the murder of #GeorgeFloyd most are wearing masks and distancing….#MinneapolisPoliceMurderdHim

The magnitude of the protest was unusual and disregarded social distancing rules amid the Covid-19 catastrophe currently affecting the US, with more than 100 thousand deaths in less than four months. Police repression was caught on video from different perspectives and posted on social media where there was a common criticism of main stream media for not covering the incident properly.

But tomorrow MSM will be talking only about "freedom fighters" in Hong Kong…c'mon America wake up! https://t.co/9hDLjJXTbU

Where is @SecPompeo free press? Maybe @APjoshgoodman will do his regular job defending democracy and free press. Oh!!!! I forgot he doesn't move a finger if not instructed by @SecPompeo https://t.co/ZQl83ESkdj

Many asked why main stream media in the US spend hours covering what they call Hong Kong “freedom fighters” trying to return that city state to a colonial status but don’t cover regular US citizens protesting for justice after racist police violence and then being repressed by police using all the anti riot gear avaliable.

#Brazil and the U.S. have something in common.

When not dying of coronavirus, Black people are killed by police.

In this case, George Floyd was choked to death by a cop from Minneapolis Police Dept.@MintPressNews#BlackLivesMatter #ICantBreathe pic.twitter.com/C3KV1R8Zn8

“Tweets from outside the US ask about the need of a statement by OAS head Luis Almagro, a third level bureaucrat at the service of the US Department of State that will never dare to criticize Washington but does not hesitate to initiate a circus when situations half the size of Minneapolis emerge in socialist countries like Nicaragua, Cuba or Venezuela,” the analyst stressed.

And others like the famous Brazilian cartoonist Carlos Latuff (@latuffCartoons) compared the whole situation with Brazil, where black people either die due to the coronavirus or the police.

“The United States is filled with people that have waited patiently for the system to correct itself against this kind of abomination but patience seems to be reaching its limits and, mixed with the chaotic US government response to Covid-19 with more that 100 thousand deaths so far, might be representing a breaking point for real change in the US,” the analyst added.