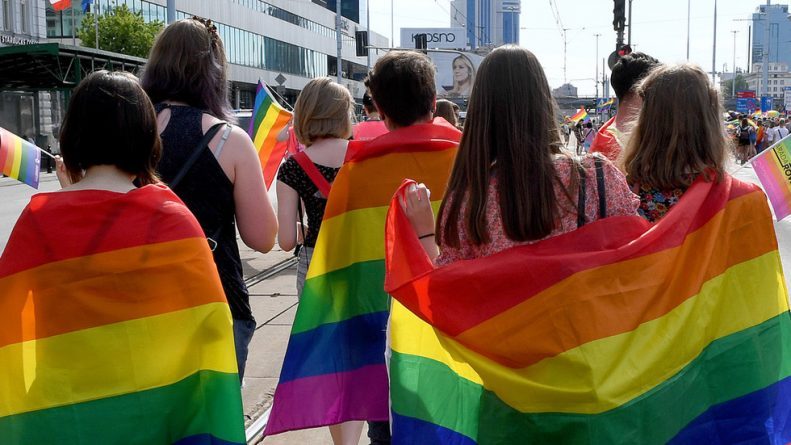 A Polish anti-government activist has been arrested for allegedly offending religious beliefs. She is accused of altering the image of a treasured icon by coloring the halos of baby Jesus and the Virgin Mary in an LGBT rainbow.

The brief arrest and threat of prosecution, which may land Elzbieta Podlesna in jail for up to two years, gained national attention, once again pitting Poland’s conservative government against its liberal-minded citizens.

The conflict stems from a complaint filed with police in late April about the discovery of profanely-altered images of one of the most treasured Christian works in Poland – the Black Madonna of Czestochowa. It’s an old icon of Virgin Mary, which is believed to originate from Byzantium and considered a national symbol. Posters found in in the city of Plock showed it with LGBT rainbow colors drawn over the halos of Mary and baby Jesus, the police said in a statement.

At 6am this morning, police in #Poland searched the flat of women’s rights activist, #ElżbietaPodlesna.

They confiscated electronic equipment & arrested her on suspicion of “offending religious beliefs”.

Distributing posters of the Virgin Mary with a rainbow halo. pic.twitter.com/5gc3KhjYId

The investigation quickly pinpointed a likely source of the altered image, but the person was out of the country at the time. After her return, police arrested her and conducted a search of her apartment, discovering what they said to be evidence of the crime. The woman was charged under an article of the Polish criminal code, which prohibits insulting religious beliefs by profaning religious items, places of worship or rituals.

Podlesna, a 51-year-old LGBT rights activist and a long-time critic of the conservative government was soon identified as the suspect in the case. She was arrested just after returning from the Netherlands and kept for five hours by police before being released, according to the Polish media. She said on her Facebook account that the police confiscated her phone and that she felt sorry for Poles, who though the action taken against her made the country great.

One of the targets of her ire is apparently Interior Minister Joachim Brudzinski, who took to Twitter to thank the police for “efficient action” in investigating the case. “No tales of freedom or ‘tolerance’ give anyone the right to offend the feelings of believers,” he declared. After the posters first surfaced, he called them an example of “cultural barbarity.”

Not everyone saw things his way of course. The Citizens of Poland, an informal alliance of anti-government liberal forces, with which Podlesna associates, blasted her arrest and the minister in person, saying in a statement that he did not deserve a condemnation in printable words. Some activists started changing their profile pictures on social media to that of the allegedly-offensive rainbow-haloed icon in a gesture of support. Others took things further, apparently trying to turn the image into a tool of anti-government protest.

They also appeared overnight on the walls of a church and monastery in Warsaw https://t.co/tgXnfTy8LI