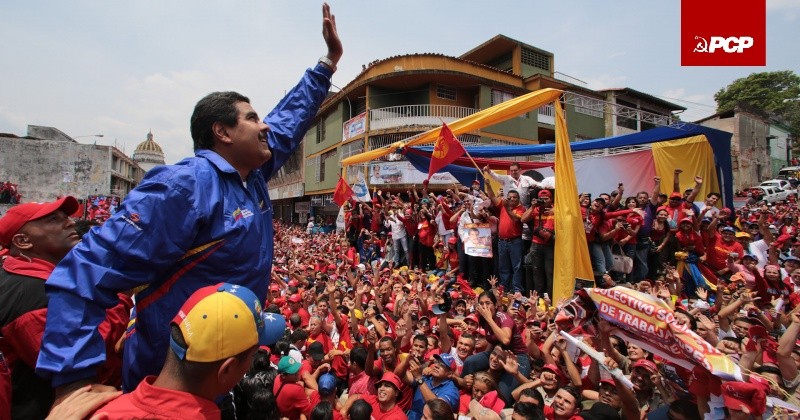 Lisbon, March 27, 2020.-The insulting charges launched by the Trump Administration against President Nicolás Maduro, leaders and senior officials of the Bolivarian Republic of Venezuela, using slanderously alleged issues linked to drug trafficking, constitute a new ignoble act that, while revealing the failure of previous destabilising operations, is part of the policy of interference and aggression which, in violation of the most elementary riles of international law, aimed at overthrowing the legitimate Venezuelan government.

The PCP denounces and condemns in the strongest terms this new putschist provocation by US imperialism against the sovereignty of Venezuela and the rights of its people, which takes place, precisely, when humanity faces the challenges posed by the serious pandemic of Covid-19.

It should be stressed, in the present circumstances, that the United States, instead of opting to promote cooperation and mutual assistance at the international level, take advantage of the current situation to intensify an intolerable agenda aimed at destabilising and reinforcing illegal and arbitrary measures and sanctions against sovereign countries. .

With regard to Venezuela, the objectives of the United States have long been clear: to consummate the “operation of regime change” initiated with the attempts of a coup d’état and the triggering of an economic war and the imposition of an illegal and inhumane blockade, which affects the people of Venezuela and the Portuguese community residing there; to defeat the liberating experience and popular achievements of the Bolivarian Revolution; to install a puppet government at its service and appropriate the vast natural wealth existing in this South American country.

The current escalation of interference and aggression against Venezuela must be widely condemned at the international level. The PCP urges the Portuguese government to take a stand that, in accordance with the Constitution of the Portuguese Republic and International Law, is guided by unequivocal respect for the sovereignty and independence of the Bolivarian Republic of Venezuela and the rejection of the interference and destabilisation campaign conducted by the US.

The PCP reaffirms its solidarity with the Bolivarian forces and the Venezuelan people and their struggle in defence of the Bolivarian Revolution and the sovereignty of their homeland.