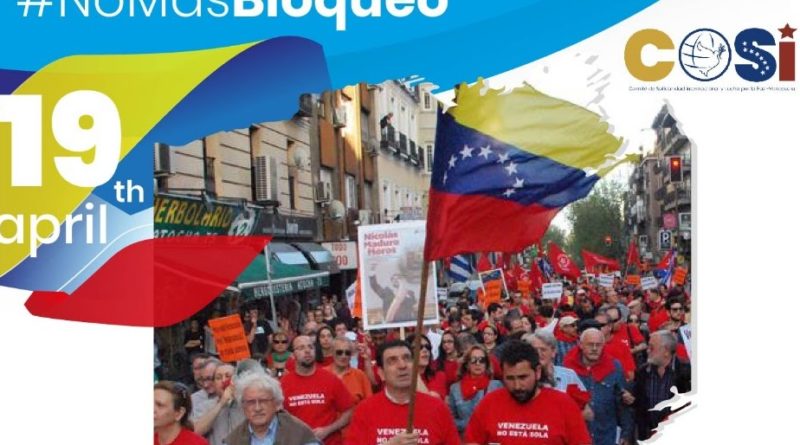 On the occasion of the Day of Global Action in Solidarity with Venezuela and the struggle of the Venezuelan people, the Portuguese Communist Party denounces and strongly condemns the on-going operation of concentration of vast US military resources close to Venezuela, which constitutes not only an unacceptable act of intimidation, but is a clear indication of readiness for a possible military intervention by US imperialism and its subjects against the Bolivarian Republic of Venezuela and the Venezuelan people.

It is particularly disturbing that – at a time when the Venezuelan government mobilizes efforts and means to prevent and effectively combat the covid-19 outbreak, defending the health of the Venezuelan people – the Trump administration choses to threaten with direct military aggression and intensify the criminal sanctions and economic and financial blockade, which so many trials and difficulties have imposed on the Venezuelan people and the Portuguese community living in that Latin American country.

RELATD CONTENT: Trump Orders Chevron to Shutter Venezuela Operations
The US’s destabilizing and aggressive spiral, cynically preceded by the Trump administration’s proclamation of an infamous “transition plan for Venezuela,” aims to crush the firm and courageous resistance of the Venezuelan people in defense of their homeland, and to impose a puppet government that will give US imperialism free reign to appropriate Venezuela’s immense natural resources.

PCP calls for the demand for an immediate end to interference, sanctions and economic blockade and military threats against Venezuela and for strengthening of solidarity in defense of Bolivarian Venezuela and the right of the Venezuelan people to determine their present and future with freedom and in peace.

RELATED CONTENT: “Deliberately Cruel”: Millions of US Citizens Blocked From Stimulus Check Because They Married Immigrants
PCP urges the Portuguese government to stop following the US policy against Venezuela in defiance of international law, and to base its foreign policy upon the values of sovereignty and national independence, peace and cooperation, as enshrined in the Constitution of the Portuguese Republic and is in the interest of the Portuguese people, including the Portuguese community in Venezuela.

PCP reaffirms its solidarity with the Venezuelan people, the PCV, the PSUV and all the Venezuelan patriotic, progressive and revolutionary forces, and their struggle in defense of peace, development, social justice and progress, and the sovereignty and national independence of Venezuela.