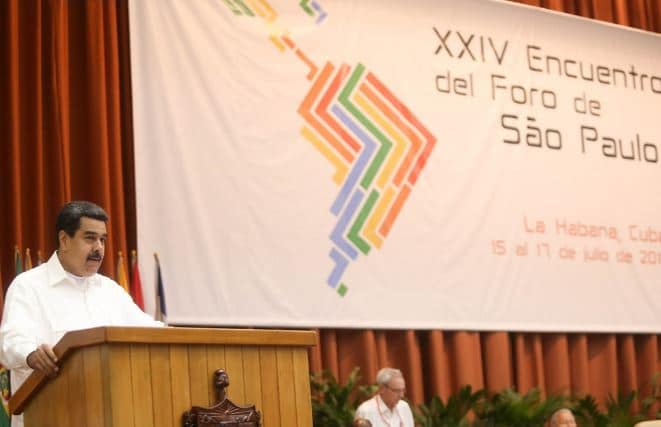 The constitutional president of the Bolivarian Republic of Venezuela, Nicolás Maduro Moros, said that the country remains standing in the face of imperial aggression and threats, “with increasing strength, with greater force.” This was expressed during his participation in the virtual International Meeting of the São Paulo Forum in commemoration and tribute to the 50 years of the triumph of Salvador Allende and the Popular Unity in Chile.

“We are walking the path of peace and social, political, and military stability; of the perfect civic-military union of the Bolivarian Revolution. We are strengthening the United Socialist Party of Venezuela (PSUV) as an immense vanguard that in every street, in every neighborhood, in every community and in every factory is together with the people, working, leading our struggle, together with the Great Patriotic Pole and all its political parties, and also united with great force in Venezuela’s daily struggle,” emphasized the Head of State.

He assured that Venezuela will always pay attention to the São Paulo Forum, which he described as the broadest organization for the coordination of forces, movements, groups and political parties in Latin America, the Caribbean and the world with regard to progressivism and the left.

“We are happy to share this space of the São Paulo Forum, a space of four decades of struggle,” he said.

The activity was moderated by the executive secretary of the São Paulo Forum, Mónica Valente, and other Latin American, Caribbean and world leaders participated in the video-conference, including:

In addition, former Brazilian president Lula da Silva sent a letter that was publicly read to the world.