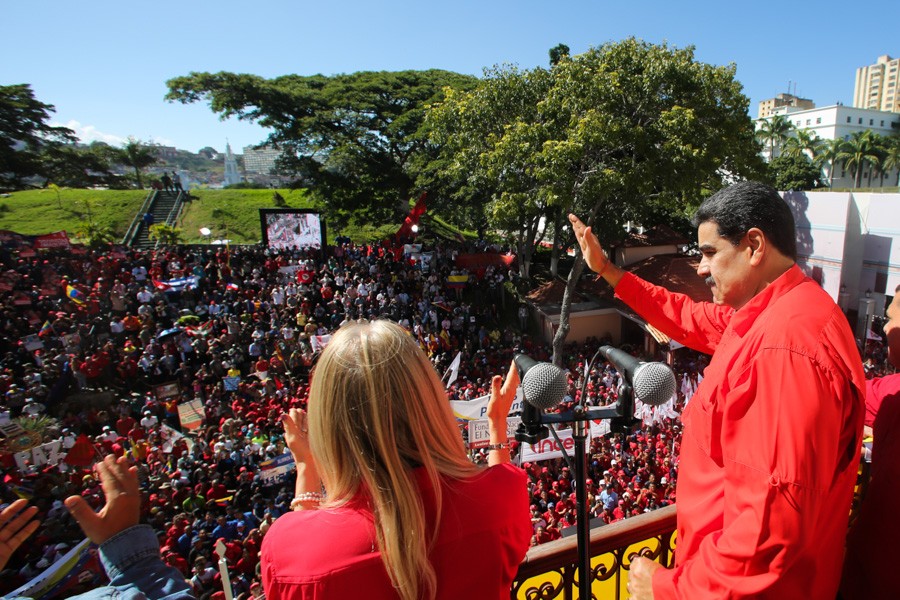 After completing a year of the political “comedy” promoted by the United States with the self-proclamation of the deputy Juan Guaidó to impose a coup on the country, the Venezuelan people gave a lesson to the imperialism of the north and its European allies, said Venezuelan president, Nicolás Maduro on Thursday when he received a large demonstration of his followers at the Miraflores Palace who marched after a new anniversary of the movement that overthrew the dictator Márcos Pérez Jiménez on a day like today in 1958.

On the attempt to overthrow him through the self-proclaimed deputy, Maduro said: “A comedy began on January 23, 2019. A year ago they tried to impose a coup d’etat on our people, and the gringos went out into the world to say this is going to be quick and easy, and a year later we have taught North American and European imperialism a lesson! ”

From the Balcony of the People in Miraflores Palace, Caracas, the Venezuelan President said that the Venezuelan right has nothing to celebrate. On the other hand, after 12 months, it only has as on balance disunity and a weakened leadership. However, all opposition leaders have enriched themselves after the corruption as evidence presented by the national government earlier showed (in a press conference held by Jorge Rodriguez), as well as revealed by several international media outlets. In this regard, the head of state added that Washington should not continue “self-deceiving with the big boob”, referring to the opposition leader and former president of the National Assembly (AN) in contempt, Juan Guaidó, who declared himself a year ago as “president in charge” of Venezuela, with the support of the United States.

The president added that the leader began an alleged tour to “take his failure to the world”, after a year in which, with the support of the Trump administration, he has brought threats to the peace, sovereignty, health and economy of the people.

Dialogue with the opposition to renew CNE announced
Maduro also announced that dialogue tables are being created with the Venezuelan opposition, so that they can renew the directive of the National Electoral Council (CNE). “To prepare for the elections of the National Assembly (AN), we are conducting talks to reach agreements with all sectors of the opposition to renew the National Electoral Council and take new measures to safeguard the elections,” he said.

However, he said that the opposition from the AN “only wasted time, conspired against the Venezuelan government and harmed the people.” He also invited the United Nations (UN) to appoint a delegation of international observers for the parliamentary elections. In addition, he asked Mexico, Argentina, Panama and the European Union (EU) to accompany these legislative elections in Venezuela.

President Maduro ratified his willingness to dialogue to ensure stability in the country.

“Venezuelans will always be ready to reach out to dialogue to guarantee the peace of the people. What Venezuela wants is peace, respect if the president of the United States, Donald Trump gets tired of the lies of Mike Pompeo and Elliott Abrams, the Venezuelan government is willing to engage in dialogue, ”he said.