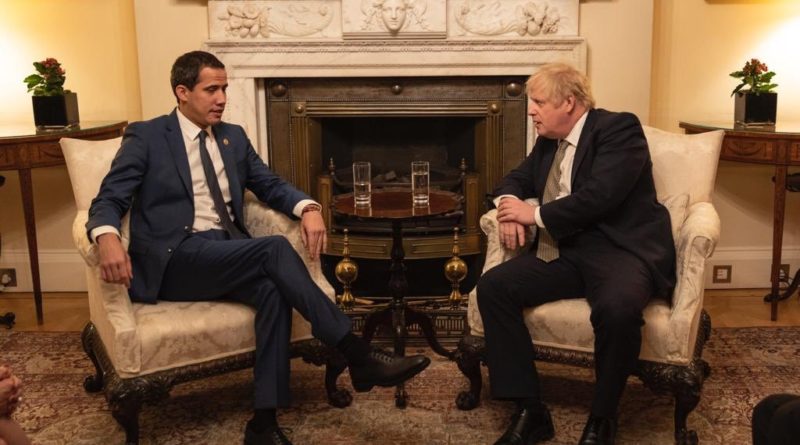 The opposition leader will head to Davos where he will possibly meet Donald Trump.

Mérida, January 22, 2020 (venezuelanalysis.com) – Venezuelan opposition leader Juan Guaido held meetings with European leaders this week as part of an international tour aimed at drumming up support for tougher measures against the Maduro government.

Guaido met with EU foreign policy chief Josep Borrell and other high-ranking officials on Wednesday. Borrell’s office said in a statement that discussions had focused on “a peaceful and democratic resolution of the crisis.”

For his part, Guaido told reporters he was in Brussels to “find the tools to put an end to the Venezuelan tragedy.”

“I wanted to personally affirm the United Kingdom’s support for him as ‘interim president,’” Raab told reporters, adding he would discuss the steps for a “peaceful democratic transition” with Guaido.

However, the opposition lawmaker’s visit was protested by solidarity groups who criticized the UK government for hosting a “puppet of the Trump administration.”

“We are against [Guaido’s] presence here. He has no legitimacy, and we don’t think the UK government should be meeting with such a person,” said Jorge Martín, secretary general of the Hands Off Venezuela campaign, in a rally outside No. 10, Downing Street on Monday afternoon.

The opposition lawmaker proclaimed himself “interim president” a year ago and was immediately recognized by Washington and its allies.

Guaido began his international tour in Bogota Sunday, where attended a regional counter-terrorism summit alongside Colombian president Ivan Duque and US Secretary of State Mike Pompeo. The opposition leader is due to attend the Davos Economic Forum in Switzerland on Thursday. A possible meeting with US President Donald Trump has not been confirmed.

Guaido has seen his standing fall after losing the presidency of the National Assembly (AN) on January 5. An opposition faction rebelled and joined the pro-government bloc in electing Luis Parra as AN President. The move followed episodes of in-fighting and corruption accusations within opposition ranks, ultimately leading Guaido and loyalist deputies set up a parallel parliament.

Guaido’s previous trip abroad in February and March 2019 was marred by scandals. Months after the Venezuelan opposition failed to force “humanitarian aid” across the border, it was revealed that Guaido had crossed the border with the help of paramilitary drug trafficking group Los Rastrojos.

Prior to that, Guaido’s aides to Colombia were revealed to have embezzled money destined to support soldiers who had heeded the opposition’s call to desert from the armed forces.

The opposition leader has also defied a travel ban from Venezuelan authorities for the second time, with several investigations from the Attorney General’s office currently open. However, in his previous international tour, Guaido had no issues re-entering the country.

For his part, Secretary of State Pompeo said the Trump administration would take “further action” to support the opposition in its attempts to force out the government.

“We do not talk about particular sanctions but everyone can fully expect that the United States is not done,” he told reporters after his meeting with Guaido on Monday.

On Tuesday, the US Treasury Department’s Office of Foreign Assets Control (OFAC) blacklisted 15 airplanes belonging to state oil company PDVSA. In a press release, it is alleged that the aircraft were used to transport senior Venezuelan officials sanctioned by Washington and also that some of them were operated “in an unsafe and unprofessional manner in proximity to U.S. military aircraft.”

Likewise on Tuesday, the US Treasury amended an executive order banning all transactions with the Venezuelan Central Bank (BCV) to grant exemptions for several organizations. Those authorized to deal with the BCV include the CAF Development Bank, the Inter-American Development Bank, the World Bank and the International Monetary Fund. Also exempted were the Red Cross and a host of UN agencies.

Since 2017, the Trump administration has imposed successive rounds of harsh sanctions on Venezuela in its bid to oust the Maduro government. In addition to measures against high-ranking officials, Washington has targeted key sectors of the Venezuelan economy, decreeing an oil embargo last January. The measures were later escalated to a blanket ban on all dealings with the Venezuelan state, authorizing secondary sanctions against third party actors in what has been likened to the US sanctions regime imposed on Iran.