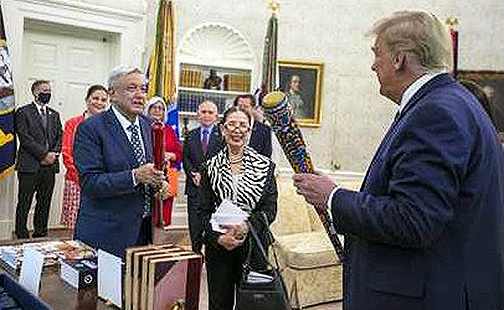 On his first visit to Washington as president, Andres Manuel Lopez Obrador began the day by placing floral offerings before the monuments to Benito Juarez and Abraham Lincoln, and some Mexicans approached those sites to welcome him and chant “it is an honor to be with Obrador,” while immigrant leaders and Democratic politicians continued to criticize the meeting.

Hours before his arrival at the White House for his working visit with Donald Trump, the Mexican president paid tribute to the two 19th century figures who were contemporaries, as a symbol that would later be used in the meeting with his host to highlight these heroes of their respective countries as examples of a high level bilateral relationship.

The supporters, some of whom arrived as early as Tuesday night at the Mexican embassy located a few blocks from the White House to offer welcome messages, later moved in front of the White House where, even with mariachi music, they continued to express their solidarity with López Obrador.

The Mexican president did not have much interaction with them beyond sending symbolic greetings and hugs, nor with some leaders of immigrant organizations who arrived in the hope of meeting with the president.

There also continued to be expressions of protest, including some virtual ones, by a diverse range of organizations that criticized the visit both for their repudiation of the anti-immigrant U.S. president and for not being included in López Obrador’s work agenda on this trip.

On the other hand, criticism of the bilateral meeting of Democratic politicians also continued. Congressman Eliot Engel, chairman of the House Foreign Affairs Committee, criticized Trump’s anti-migrant and anti-Mexican policies in a series of tweets, concluding that “as we listen to the government showing the links between the United States and Mexico as positive today, let’s not forget that Trump’s policy toward the neighboring country has been a total failure and has caused incalculable harm to people on both sides of our border.”

Some analysts and retired U.S. diplomats continued to express doubts about the timing and specific purposes of the trip.

Roberta Jacobson, former U.S. ambassador to Mexico, said that thought has to be given “to how this visit will be used by Trump,” and that it is not clear exactly what the purpose of this trip is for Lopez Obrador either, since there was no urgency. Without “concrete results” beyond a statement, it is more like “a lost opportunity,” while one has to worry about “the unintended consequences” of the visit for not including meetings with other political forces, particularly the Democratic leadership, at an election juncture, she said at a Wilson Center forum.

On the other hand, analysts such as Professor Raúl Hinojosa, from the University of California, point out in new research that those most affected by the political management of the pandemic in this country are undocumented Mexican immigrants, both because of the health effects and the economic consequences, and because of the denial of all assistance, but their situation was not on the table at the White House.