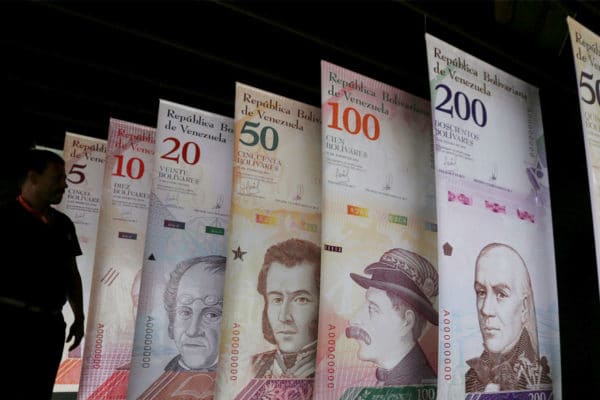 The purchasing power of the working class in Venezuela, also known as the real wage, has fallen 97% since August 2018. The determining cause of such a collapse we have discussed on several occasions: it has been the rapid and disproportionate increase in the prices of all merchandise at the national level, an increase that is part of the economic and criminal war against the Venezuelan people by US imperialism and that has been induced by manipulating the exchange rate of the bolivar with respect to the dollar.

In the private sector. Although the Venezuelan government, in response to the economic war, has sought to protect the Venezuelan people, particularly the working class, through bonds from the Patria system, universal and free health and education systems and food subsidies through CLAP food exchanges, the gap between wages and prices not only grows larger, manifesting itself in a deterioration of purchasing power, but at the same time and as the real wage becomes less and less the profit of the bourgeoisie, that is, the degree of exploitation, increases in the same proportion.

RELATED CONTENT: How Much did Miami Anti-Chavistas Pay for Trump Fundraiser?

It is a matter of the increasingly unequal distribution of wealth as a consequence of induced hyperinflation. The sequence is as follows: imperialism attacks the currency, they induce the depreciation of the bolivar, the price of all goods, except that of the labor force, increases and therefore also the income of the bourgeoisie, as wages remain stagnant, the additional money that goes to the business owner due to the increase in prices goes into his pockets as profit. Between 2016 and 2017, worker exploitation increased 42%.

It is urgent to increase the salary. In August 2018, despite the fact that the increase was historic, 3,710%, it was also relatively low due to the lag it carried: the Petro equal to 1,800 BsS and US $ 30 did not even cover the list of 27 (basic) food items “agreed upon” with the bourgeoisie at that time.

Some economists on the right and also on the “left” claim that wages cannot be increased because there are insufficient resources in the economy, an argument that falls under its own weight. In the case of the private sector, we insist, the money is there but unevenly distributed. It is in the pockets of the bourgeoisie whose profits have increased in hyperinflation to the extent that, while prices have increased and they earn higher incomes, they have paid lower wages in relative terms. According to the BCV, in 2016 for each bolívar earmarked for salary remuneration, 21 ended up in the hands of the capitalist, which was already rude; in 2017 that ratio became 1 to 30. We are waiting for the BCV to publish the consolidated accounts of 2018 and 2019 to update these numbers.

It is very likely that at the time a wage increase is decreed, imperialism will increase the attack on the bolivar, inducing a price increase and purchasing power will deteriorate again. This was the case in August 2018, it has always been this way. We ask ourselves: do we not then adjust the salary even if it is the working class that is affected? Whether or not there is an increase in wages, they will intensify the attack on the bolivar when they see fit and, following their pattern of behavior, on the eve of elections, they will most likely do so.

It is urgent to 1) review the minimum wage established in the Petro environment so that it meets the needs of the worker and his offspring; 2) adjust its reference to bolivars each time its unit of account, the Petro, varies; 3) increase the percentage of end of year bonuses distributed to the worker, a mechanism provided for in article 131 of the Organic Labor Law. The three months of year end bonus contemplated in the law is a marginal figure with respect to the value of the labor force that the bourgeois does not pay to the employee.

The objective of this last point, in addition to reducing the exploitation of the worker and with it the injustice in the distribution of wealth, is to guarantee that every time the prices of the goods increase (exploitation mechanism par excellence together with the increase in productivity) that additional money that comes in from sales does not go exclusively to the bank accounts of the bourgeois but is distributed to the worker maintaining, even decreasing, the ratio between profit and salary.

These proposals may look, for some, like just plain labor demands. However, as long as we do not overcome the mode of production based on private and concentrated ownership of the means of production, but also, as long as we do not end the most powerful weapon of this economic war, the attack on the bolivar, it is urgent to secure for the workers and their families the conditions to keep giving battle.

Marx said in 1865: “… should the working class give up defending itself against the usurpations of capital and give up its efforts to take advantage of all the possibilities that are offered to it to temporarily improve its situation? If it did, it would see itself degraded into a uniform mass of unfortunate and broken men, with no possible salvation. I think I have shown that the struggles of the working class for the level of wages are inseparable episodes of the entire system of wage labor, that in 99% of the cases their efforts to raise wages are nothing more than efforts aimed at maintaining the given value of labor remains, and that the need to struggle with the capitalist about its price is linked to the situation of the worker, who forces him to sell himself as a commodity.

In the public sector. The salaries in the public administration and especially how to finance them will be developed in the next installment. We ran out of space …