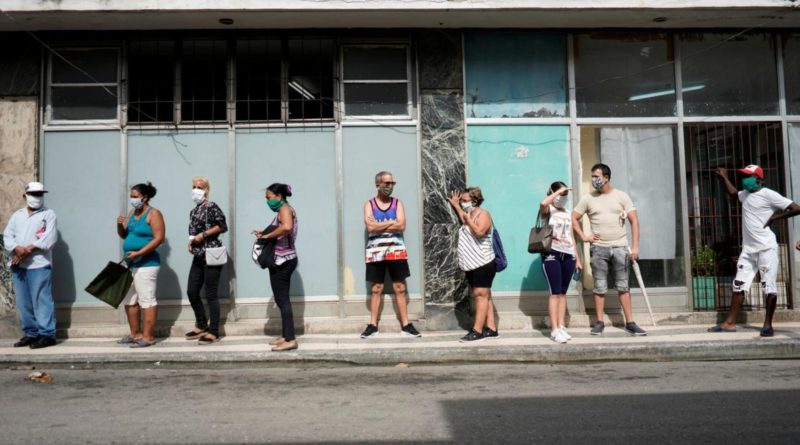 HAVANA (Reuters) – Cuba began mass testing for the new coronavirus this week even as it appeared to have contained infections, and residents struggled to move around amid a partial shutdown in search of scarce basic goods.

New cases have fallen to less than 20 per day from a peak of around 50 in April.

Since the first COVID-19 illness was reported two months ago there have been 1,804 confirmed cases, of which 70.7% have recovered and 78 people have died.

Cuba has closed its borders and the tourism industry, schools and public transportation. Masks are mandatory and eating at restaurants, bars and social gatherings prohibited. Cubans have been urged to stay at home and practice social distancing.

But the public has not been confined to quarters and has taken to trudging about in search of basic supplies, waiting in long lines and even dusting off bicycles from the dark days following the fall of the Soviet Union.

“I had to fix this bicycle up because I hadn’t used it in 25 years,” 49-year-old Alfredo Fonseca said, as he prepared to peddle to work in Havana. “I had to start using it again because of the pandemic and closing of public transportation.”

Tania Castro had fewer options. “I am walking and walking a lot because I don’t have a bicycle, a motorcycle, or a car and the buses are not running,” she said.

While Communist-run Cuba’s universal and free healthcare system has proved key in containing COVID-19, the pandemic has exacerbated shortages of basic goods and a chaotic retail system caused largely by U.S. sanctions and the centralized, state-dominated economy.

Cuba’s top epidemiologist, Francisco Durán said on Monday that mass testing would help better define the prevalence of the coronavirus as many people found to be infected showed no symptoms.

“The objective is to find new cases and then intervene, isolate, seek contacts, and take all possible measures to ensure that Cuba continues as it is now,” he said during his daily virus update broadcast to the nation.

Many experts believe Cuba has managed to control the outbreak better than many countries in the region due to its well-staffed preventive healthcare system, mobilization of activists through mass organization to track cases, a centralized system that allows a better focus, and willingness to quarantine large numbers of people.

Cuban scientists announced last week they had adapted SUMA, a computerized system developed locally, to quickly detect antibodies of the new virus, allowing for mass testing in hospitals and clinics at little cost.

“That is a big advance,” Havana doctor Marta Martinez said.

To date, the Caribbean island nation has used expensive and often donated tests that take days to process, house by house visits by health personnel and medical students to trace contacts, and isolation.

Thousands of patients, suspected cases, close contacts and persons considered at risk have been hospitalized or quarantined in makeshift institutions while in other countries – most of them hard hit by the pandemic – they may have been told to simply stay home.

“The neighborhood family doctor office is notified about anyone at home with symptoms and must take immediate action,” said Yosian Diago, a nurse in central Havana supervising medical students going door to door.

“The same students help the population understand what they can do to help, and well, this is how many cases have been detected.”

While most western Europe, the US and Canada with all their resources have been hit on a catastrophic level by the pandemic, Cuba has been able to control Covid-19 and even send medical brigades all over the world, to the point that many organizations are promoting its nomination to the Nobel Peace Prize.

Among China, Vietnam and Venezuela, the island of dignity has shown that it only requires love for the people and resolve to avoid a catastrophe. Even under harsh US sanctions and blockade, Cuba and Venezuela have shown the world that “Si se Puede” when you really care for the people.

Featured image: People line up to buy food amid concerns about the spread of the coronavirus disease (COVID-19), in downtown Havana, Cuba, May 11, 2020. REUTERS/Alexandre Meneghini