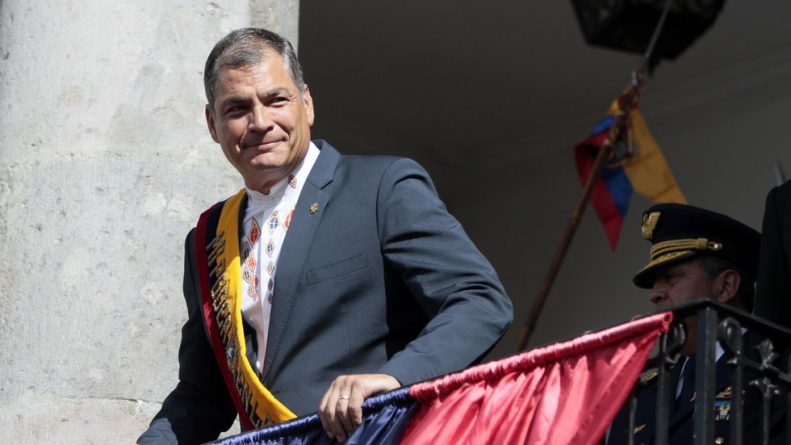 Former Ecuadorian president Rafael Correa has lashed out at CNN over a report claiming whistleblower Julian Assange turned the country’s embassy in London into a “command post for election meddling,” branding the story “rubbish.”

In a Monday report, CNN alleged that the WikiLeaks founder had used the Ecuadorian embassy, where he lived under asylum for seven years, as a base from which to help Russia “undermine” the 2016 US presidential election. CNN claimed Assange received “in-person deliveries” of potentially “hacked materials” and held “suspicious meetings” with “Russians and world-class hackers.”

A day later, CNN published comments from an interview with Correa in which he said that since Assange was posting information about Hillary Clinton and not Donald Trump, his whistleblowing amounted to “manipulation.” This is why Ecuador eventually cut off Assange’s internet access in the embassy, Correa said — but he denied there was any cooperation between Assange, Russia and Ecuador to interfere in the US election.

CNN, however, framed the story to fit with its conspiracy narrative of Assange and Quito aiding in Moscow’s alleged interference, with its headline dramatically reading that Correa “confirms” the election meddling. In a tweet promoting the story, the network implied that Correa was aware of the alleged meddling and simply didn’t care.

Former Ecuadorian President Rafael Correa says his country was aware that WikiLeaks founder Julian Assange was interfering in the 2016 US presidential election from Ecuador’s embassy in London https://t.co/RxgNL3dq3r pic.twitter.com/fQgWmm92I3

Correa told RT on Wednesday that CNN’s original story about the embassy operating as a “command center” was “rubbish” and that the network was trying to build an untrue narrative of cooperation between Assange and Russia to ensure the public supports his eventual fate.

What CNN and other media are saying is rubbish, but we’re used to it. They are prepping for the show. The reason is, when they extradite Assange to the US and sentence him to life, they want the honest backing of the public. They are setting the stage.

Correa compared CNN’s assertions about Assange to its claims about “weapons of mass destruction” in the lead up to the Iraq war in 2003 — media manipulation which was used to make Americans “applaud a war,” he said.

Now, to “justify the assassination of Assange or to extradite him” they are constructing a new narrative about a fake “command center” for election meddling, he said.

Correa also denied claims made by other media that he had a direct telephone line with Assange in the embassy. In reality, he said, he only spoke to Assange once — when the WikiLeaks founder interviewed him for his show on RT.

Correa said that CNN’s claims about illicit activities in the London embassy were not confirmed by actual evidence, but based on the report by US Special Counsel Robert Mueller into so-called Russian interference and disproven “collusion” with the Trump campaign.

The former Ecuadorian leader also dismissed claims made by CNN that it was pressure from US authorities that forced Quito to cut off Assange’s internet and phone access.

If such a threat [from the US] had come to me, I assure you that I would not have taken any action — because we do not accept this kind of pressure.

In Correa’s opinion, Assange was “justified” in publishing damaging material about Clinton because it was “true” — but he also said that publishing about one candidate and not the other was a kind of “manipulation.”

When Assange was arrested by British police and dragged out of the Ecuadorian embassy in April, Correa slammed his successor Lenin Moreno as the “greatest traitor in Ecuadorian and Latin American history” for having “allowed” it to happen, adding that Assange’s arrest was “a crime that humanity will never forget.”

CNN even attempted to implicate RT in the whole conspiracy by including in the story a long-debunked theory that this network was in cahoots and “coordinating behind the scenes” with WikiLeaks simply because it reported on a new document dump which was posted on the website before the whistleblowing site tweeted out a link to the information.