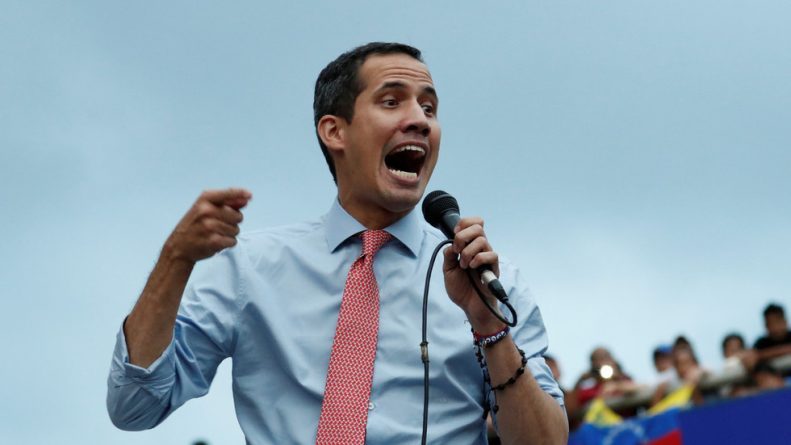 The self-proclaimed ‘interim president’ of Venezuela, Juan Guaido, has fallen victim to a famous Russian prankster duo, discussing freezing Maduro’s Swiss bank accounts and even sending them an “official request” to do so.

The comedic duo of two Russian pranksters – Vladimir ‘Vovan’ Kuznetsov and Alexei ‘Lexus’ Stolyarov – notorious for their high-profile pranks of politicians world-wide, released an audio, which purportedly captured their “talks” with Guaido on Thursday.

The prank victim apparently found the pranksters after the duo called the US Special Representative for Venezuela Elliott Abrams, impersonating the President of Switzerland, and the chief of the nation’s Department of Finance, Ueli Maurer.

Shortly after the call, they were contacted by an “ambassador of the new Venezuelan government,” Carlos Vecchio, who then arranged talks with the ‘interim president’ himself. According to the pranksters, Guaido insisted on holding the “talks” only through Skype or WhatsApp for fear of wiretapping.

On February 20, ‘Maurer’ and Guaido talked about the “crime monies” of Venezuelan President Nicolas Maduro, supposedly held in Swiss banks. The ‘Swiss president’ promised to freeze the accounts, claiming that of late the banks observed transfers from them to Russian and Chinese banks.

The pranksters reassured Guaido that he would be able to “manage” the frozen Venezuelan government accounts “as head of state.” “Excellent,” Guaido replied. Apart from that, the duo talked about another way, suggesting to simply create a personal account for Guaido and transferring Venezuelan state funds there.

To take action, the ‘Swiss president’ asked Guaido to send an “official” request, sending him a draft of it. The draft included a list of Swiss banks, where the “crime monies” are supposedly held – and cheekily included ‘Lexus Vovanial Bank Ltd.’ – a fictitious bank, based on the duo’s nicknames.

While the prank was already a success, Guaido himself apparently added more hilarity to it, bragging to the press about getting in touch with the ‘Swiss president’ and stating that he was “doing everything possible to protect these assets that belong to the republic.” Switzerland, however, swiftly rebuked Guaido’s claims, stating – obviously – that “there was no telephone contact between Mr. Guaido and President Maurer.”

The official statement by the real Swiss government, however, did not stop the prankster duo, who then again contacted Abrams and ‘Ambassador’ Vecchio, complaining about Guaido not being able to keep the “talks” private.

Surprisingly, the veteran meddler Abrams took the bait, replying to their email.

“Yes – that was an error on his part. We will of course keep everything confidential,” a screengrab, purportedly showing a reply from Abrams to ‘Maurer’ reads. The US Special Representative for Venezuela promised to tell Guaido “gently” that openly speaking to the press about such sensitive matters “should not be repeated.”

A similar response was provided by Vecchio, who reassured the ‘Swiss president’ that they “already took action” and such a blunder “will not happen again.”

As the fallout of Guaido’s talkativeness was contained, the duo received English and Spanish versions of the “official document” from the ‘interim president’ – Lexus Vovanial Bank Ltd. included – screenshots provided.